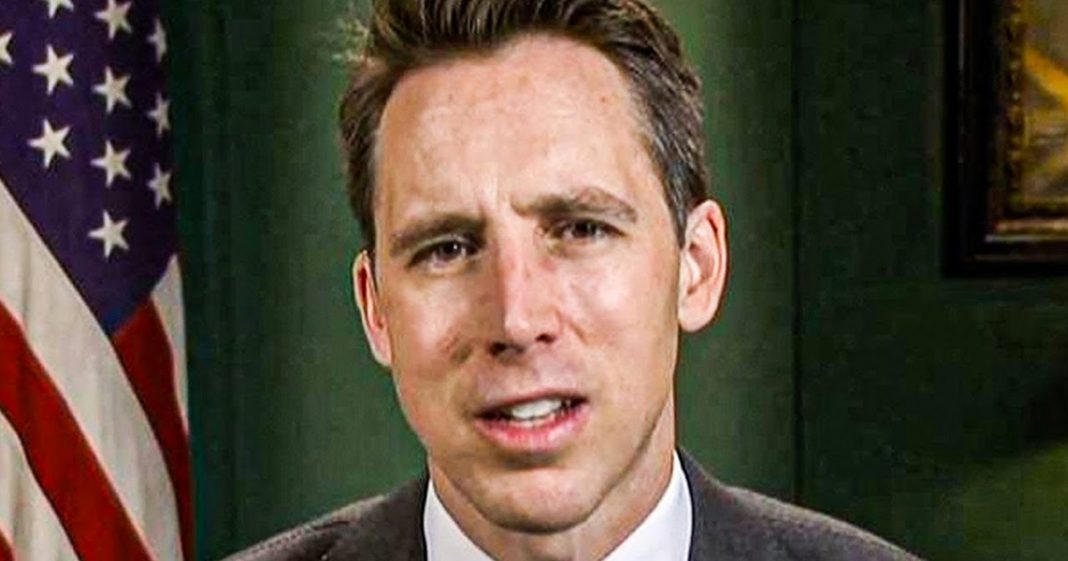 The battle for Donald Trump’s base might already be over, as Republican Senator Josh Hawley has been rewarded by angry Trump voters with a massive cash haul. The latest data shows that, rather than being angry with Hawley for appearing to support the Capitol rioters, Republicans are actually HAPPIER with him and they are giving him their hard-earned money to show their appreciation. Ring of Fire’s Farron Cousins explains what this means.

Republican Senator Josh Hawley, according to his latest campaign filings, has raised $1.5 million since January 1st from 28,000 individuals. Now keep in mind, Hawley is the Republican Senator, who as we like to point out here, gave the fist of solidarity to the Capitol rioters prior to them becoming rioters, back when they were just a mob of deranged Trump supporters, and Hawley is being rewarded for that. The lack of any kind of punishment coming from the Democrats is allowing this to happen. So yes, I do have a little bit of anger towards them for not holding people like Hawley or Ted Cruz accountable and so here we are. But there’s a bigger parts of this story here. Hawley has obviously, um, emerged as one of the, I guess you would call them front runners of the 2024 presidential race. He’s not up for reelection for his Senate seat until 2024 as well.

So, you know, he could end up not seeking reelection for that, should he become the Republican nominee, which with Roy Blunt announcing on Monday that he wasn’t seeking reelection for his Senate seat in Missouri, suddenly that opens up. But that’s also beside the point. What is the point is that it kind of seems obvious based on these new reports on where Trump’s supporters are going. In the early days after Donald Trump left office and to be honest, even before he left office, there was a bit of a fight that we talked about at length here, taking place between Ted Cruz and Josh Hawley over who could be the most Trump-like in order to attract those supporters. Now, Ted Cruz thought for sure that he had it in the bag, but apparently that’s not the case, I guess we’ll see a little more once we get Ted Cruz’s fundraising numbers. The quarter doesn’t officially end, obviously till the end of it March, but two months for Hawley, $1.5 million from 28,000 individuals.

And as Axios is reporting, a lot of these are the Trump supporters, the disgruntled Republicans, that bodes well for Josh Hawley’s political future. Ted Cruz obviously got slammed recently when he decided to skip the country when Texas needed him most and head down to Cancun. So that could cost him dearly and if I were Hawley, I would go ahead and start trying to make that a campaign issue. Look, I’m just speaking from a purely like political analyst situation here, not left or right, just trying to see things for what they are. Hawley has the potential to go ahead and really do, deal that death blow to a potential Ted Cruz presidency if he acts now. And that also gives Democrats the added benefit of knowing who exactly they’re going to be up against. I know 2024 is a long ways away and technically we only got conclusions to the 2020 election yesterday when the Supreme Court didn’t hear Donald Trump’s three remaining election challenges.

So that officially ended that 2020 race. But we have to start thinking about this. We have to know who is on that other side so we know who to go after. Trump’s base is rewarding representative, excuse me, Senator Hawley, for supporting them at that Capitol event. This is going to continue. He is going to try to capitalize on that as much as possible. Democrats in the Senate were in a position where they could have somehow punished him, at least censured him, which is effectively meaningless, but hell at least it’s something for supporting these individuals. They chose not to do it. They’ve kind of missed that opportunity. It’s a little after the fact at this point to do it. Hawley is emerging as the front runner, even though the polls still show Trump, it’s Hawley and they need to take that seriously and they need to work on bringing him down before he becomes too powerful to beat in a general election.