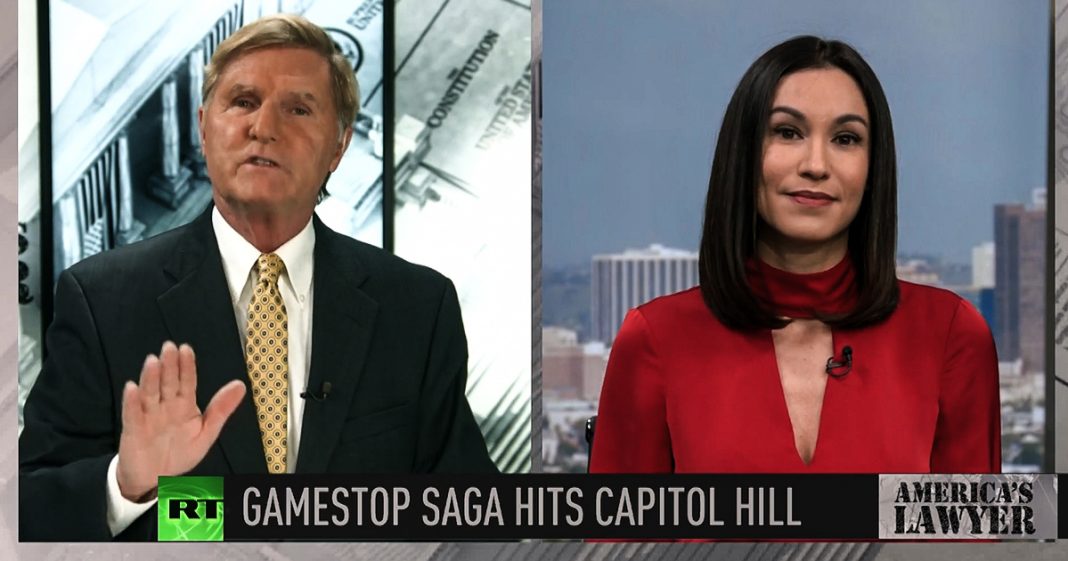 Via America’s Lawyer: Facebook reaches a deal with the Australian government to restore news sharing to the country’s users. The feature was banned after news outlets demanded to be paid for their content. Mike Papantonio & Farron Cousins discuss more. Plus, executives from Reddit, Robinhood, Gamestop, and major hedge funds testify about what caused the financial calamity that sent share prices skyrocketing up to 1600%. RT Correspondent Brigida Santos joins Mike Papantonio to explain more.

Mike Papantonio:             Facebook has reached a deal with the Australian government to restore its news sharing feature after cutting off Australians from sharing news on their feeds, when media outlets demanded to be paid. Okay. Real simple here. All right. You’ve got this monstrosity, this tech monstrosity that believes they are bigger, I mean, they think they’re bulletproof, honest to God, think they’re bulletproof. Now they go to Australia and they start saying, we’re going to punish you Australia. We’re going to punish you because, oh my God, news sources want to be paid for their work. Take it from there.

Farron Cousins:                  So Australia tells the, or Facebook tells the Australian government ,we’re blocking all news in your country. Oh and just for good measure, we’re cutting off all your, your firefighters, your, your social services pages on Facebook. We’re just shutting those down because to hell with you, I guess, is their reasoning. So, and they did this again because Australia was working on legislation that would in fact force Facebook to start paying the news companies, who it’s using essentially, to get people to come to Facebook. Come to Facebook because that’s where the news is.

Mike Papantonio:             The the bad news. You predicted this last year. Okay. Here’s the bad news. They worked out a deal. Now that sounds like good news on it’s face, doesn’t it? It sounds like great news, but it’s not. All Facebook is trying to do is consolidate, consolidate all this information and start their own news service. This is going to be corporate media on steroids. Australia had to cave in, I guess, that the other part of it is, it slowed down the regulatory look at Facebook.

Farron Cousins:                  Right. So Facebook it’s a win-win for them because, you know, yeah, they’re not getting the regulations right now, but their new deal, they’re saying, look, we’re going to help these struggling newsrooms in Australia, just like they’re struggling everywhere. We’re going to pay them for their content. But what it does is gives Facebook the clearance to say, listen, we’re paying you. We don’t want you to talk about this. We don’t want you to talk about that. We’re not going to let you publish this story or that story or whatever it is. Facebook at that point becomes a news organization, not just a social media company, and that is exceptionally dangerous.

Mike Papantonio:                  Why is it that, why is it that we don’t see this? Why is it that the person watching this program right now, who’s on Facebook every day, we have a Facebook site, I guess you have to do it. You have to go, you have to make that move. But the truth is you got to understand, go into it with your eyes wide open. Facebook starts out and they say, we’re now going to censor individuals, right? We don’t like what you said, this is socially unacceptable. So we’re going to censor you. The next thing they do is they start censoring news sites, right? We don’t like the way you reported this. It doesn’t meet with our ideology. So we’re going to shut you down there. The next thing we now have, you see the progression?

Mike Papantonio:             Individuals, sites. Now how about where you’re censoring an entire government and nobody says, well, my God, there’s something wrong with that. You can’t censor an entire government. These people believe they could have censored all of Australia. And we don’t see a problem here, really?

Farron Cousins:                  Right. And they absolutely could have, that’s the scary part is, well, I mean, effectively they did, but they still have the power to do this. They could do it, I don’t know if they have the reach to do it in the US, but you could certainly do it in smaller countries and then build up from there to the point where we’re all citizens of Facebook at that point, I guess. I don’t know what it is.

Mike Papantonio:             The house financial services committee has kicked off its first round of hearings over the GameStop saga that pits small investors against Wall Street and I’ve got Brigida Santos here to talk about it. Brigida, look, the house always wins and the house in this situation is Wall Street. Wall Street has sent out their flying monkeys to protect their territory here. I don’t know how to simplify it even more. It’s all about Wall Street calling in favors from legislators they’ve given money to so we can have hearings and protect our little fiefdom. For those who don’t remember, how did the GameStop, how did it begin? Take, take us from the top of the story.

Brigida Santos:                   Sure. I’ll break this down. Look, this all started in January when a group of individual investors rallied on the Reddit forum Wall Street bets to basically push up the price of GameStop stocks that had been shorted 140% by hedge funds. Now, all this means is that hedge funds had borrowed other people’s GameStop shares and immediately sold them at what they believed was the high price at the time. Now they thought GME shares were overvalued and that they would drop in price by the time they needed to repurchase those shares to return to the brokers that they borrowed from, which is required by law. By selling high and repurchasing low, they had essentially profit off the price difference, but the tried and true strategy backfired because retail investors knew that the hedge funds had heavily shorted GameStop, reportedly just by looking at public information. So those retail investors went on Reddit. They encouraged each other to buy GME shares on Robinhood, which then just drove the stock price up as high as 1600% at one point. Hedge funds were then forced to buy back in at the higher price because they had to return those shares that they borrowed from the brokers and of course this just ended up driving the cost up even higher. In total, the scheme costs GME short sellers, over $6 billion in losses.

Mike Papantonio:             That’s the good news. The good news is where it landed is all of these sharks, these predators from Wall Street that were, that are in the business, by the way, of destroying small businesses so they can make more money on the backend by selling short, see it all the time. They all got their butts kicked and that’s good part of the story. So I wonder what is Congress investigating right now?

Brigida Santos:                   Well, surprise, surprise. Congress is now all of a sudden investigating market manipulation. The committee is looking into whether Robinhood changed its trading rules to favor its biggest Wall Street partner, Citadel securities, over small investors when temporarily blocking users from buying shares of GME and other retail boosted mean stocks. Now that’s good. If Robinhood investors had continued to buy and boost up the price of GME shares, Citadel might’ve lost a lot of money. That’s because Melvin capital, the investment firm that Citadel previously invested $2 billion in, lost 53% of its portfolio from its GameStop short position. So it’s good that they’re investigating Robinhood here. Now during the hearing, Congress heard testimony from executives at Robinhood, Citadel, Melvin Capitol, Reddit and other major players. It also heard from Keith Gill, AKA Roaring kitty. Now he’s the YouTuber who promoted GameStop shares to those retail investors that really got them into this investment.

Mike Papantonio:             Yeah. I mean, the Wall Street thugs thought they were going to make a lot of money based on the failure of this company GameStop. So they, at the end, they’re going to have a big payday. Well, no, all of a sudden you had a groundswell. I call it economic populism where people say, I’m so tired of Wall Street’s hustle. It’s a constant hustle. They all, the house always wins. Maybe this is a time they clearly didn’t win and it’s, it’s something that might have potential to work in the future. Has Congress proposed any solutions to protect average investors rather than their pals on Wall Street?

Brigida Santos:                   Some ideas floating around currently include imposing a 0.1% tax on stock bond and derivative trades. But Wall Street opposes the proposed tax and it’s likely going to lobby very hard against it, which is why our laws continually favor Wall Street over main street. But as you said, this is a populist moment, a bit of a class war and mainstream investors are taking matters into their own hands. They’re now investing in a new kind of capital market and turning to cryptocurrencies and decentralized finance where the lending, borrowing and trading of crypto assets can actually be automated through smart contracts. Now, in theory, the peer-to-peer system is fair, unlike the system we have now, transactions cannot be frozen, prioritized, et cetera, for certain individuals and entities.

Mike Papantonio:             I hope Wall Street continues to get their butt kicked and if, if, if legislators come to the aid of them and not the, not the average American, I think there’s going to be, there’s going to be a lot of outrage because this is going to happen again. This story is not over. Thank you for joining me, Brigida.