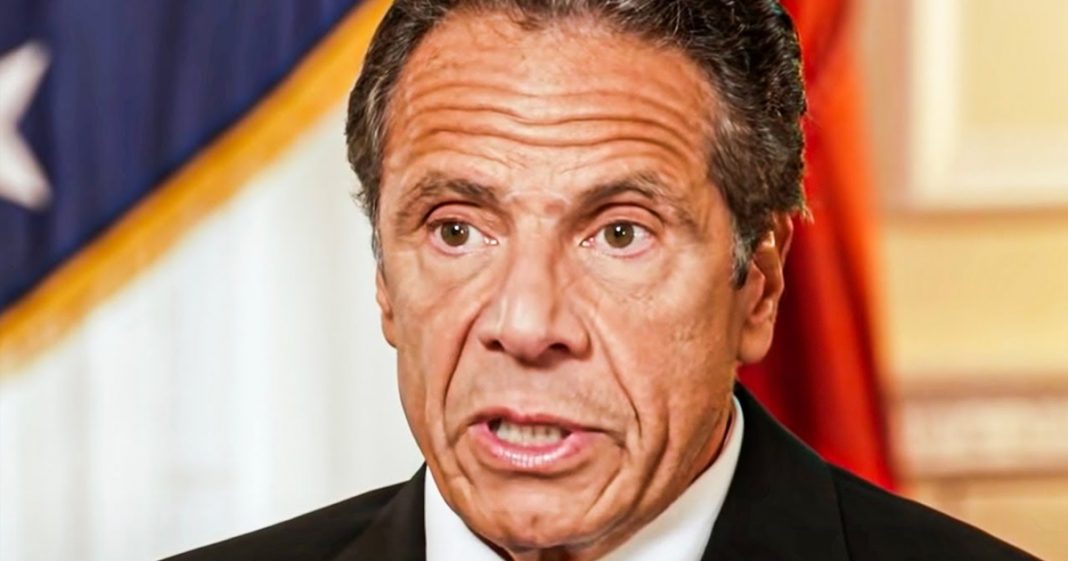 New York Governor Andrew Cuomo continues to refuse to resign, and the Democrats of New York keep calling on him to do so. This is a fool’s errand, and the only thing that needs to happen at this point is for Cuomo to be impeached and removed from power. He has already made it clear that he isn’t leaving office on his own terms, and unless Democrats want him to continue to poison the Party, they have to get him out of office now. Ring of Fire’s Farron Cousins discusses this.

Over the weekend, more Democrats from the New York state assembly came out, calling on Democratic New York governor Andrew Cuomo to resign, Cuomo insists that he is absolutely not going to resign. So what’s the point of continuing on with these calls for resignation? Now I mocked this as well, by the way, for those of you loyal fans here at Ring of Fire, back in the day, when you had all these Democrats calling on, on Donald Trump to resign for his handling of COVID and every time a new COVID scandal come out, like, oh, he should resign. Yeah. Um, how frequently does that work? I mean, I understand it worked for Al Franken. Sure, sure. Um, but when you have an ego like you do with a Cuomo or a Trump, you can call on them to resign till you’re blue in the face. It’s not going to change anything.

All it’s going to do is give you a little bit of cover to say, hey, look, that’s all I can do. And for Trump and the Democrats, that really was all they could do. But with Cuomo and these New York lawmakers, that’s not all you can do. And that’s why this is starting to really bug me here because you can call on him to resign all you want. He’s already said he’s not going to. So after he says, I’m definitely not doing it. If you’re still calling for it, you’re, you’re missing the point here because you do have the power because the governor of New York can be impeached. Yeah. So calling on him to resign is not the only thing you can do. You can quite literally take action to remove him. Instead, what we’re seeing is these New York lawmakers trying to cover their own behinds by saying, oh, well, I called for his, him to resign.

I told him he needs to leave. What more could I do? Other than literally get him out of office, which I do have the power to do with all of my Democratic brethren here. We’re just, you know, not. Democrats ignore Cuomo at their own peril. The guy, his term ends in 2022, is when the next New York gubernatorial election is. So if you let him be, you’re going to experience two straight years of Republicans running ads, tying every single Democrat in this country to Andrew Cuomo. Comparing every Democrat in this country to Andrew Cuomo. Cuomo, Cuomo, Cuomo, Cuomo, Cuomo, Cuomo. His face will be in ads everywhere, not just in New York, but I promise you here in Alabama too, because all of the Alabama Republican ads feature Nancy Pelosi because they always try to take the most high profile, most corrupt looking Democrat and stick it in all these ads in middle America. And that’s what they will do with Cuomo and Cuomo has got some real skeletons in that closet.

Any, I mean, pick a scandal, seriously, pick a scandal that this guy is currently embroiled in and use that to impeach him. You don’t even have to go for all of them if you don’t want to, just pick one, my God, there are so many at the moment and they’re all pretty fricking terrible, just like Cuomo himself. But I promise you Democratic party, you let this guy stay in office, he will cost you the midterms. No matter how much you deliver for the public, which you’re still not even doing that and that’s going to cost you as well, but you leave Cuomo in place, it’s going to be much worse than you’re already looking at.