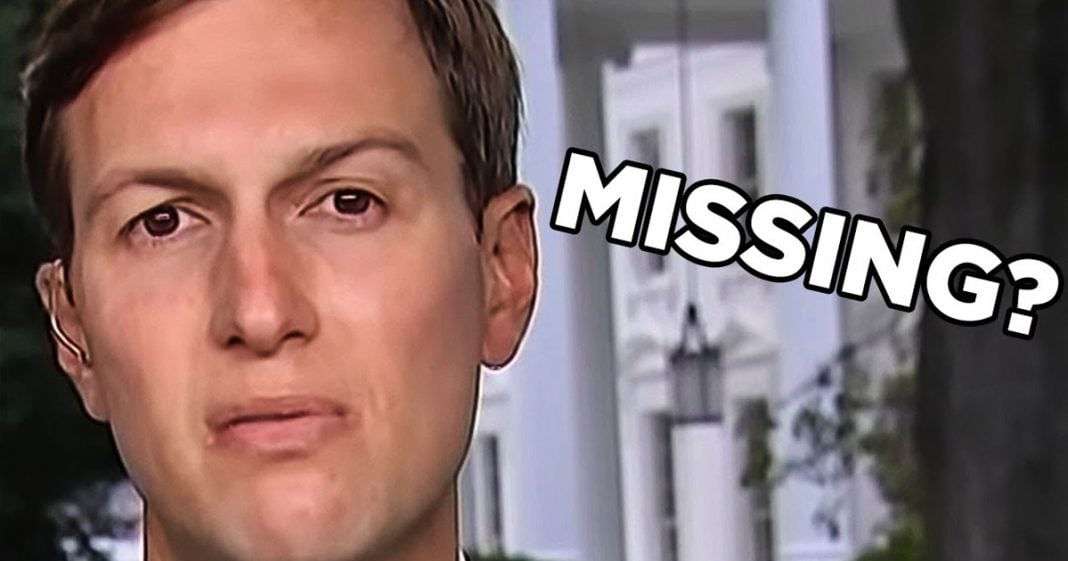 Donald Trump has come whimpering back into American politics, but there is one person noticeably missing from his political orbit: Jared Kushner. Kushner was with the former President every step of the way from the primary to the second campaign, and now he is absolutely nowhere to be found. Trump had repeatedly expressed his frustrations with Jared over the years, so did he finally give Jared the boot, or did he just decide to not include him in the new projects? Ring of Fire’s Farron Cousins discusses this.

Where the hell is Jared Kushner? That’s a question I think a lot of people would like answered right now. I mean, after all last we knew, I mean, the guy was under multiple different investigations for several years. What happened with those? You know, where’s the outspoken Kushner who was bringing peace to the Middle East, right? Where, where is this guy? And that’s actually a question that was asked by CNN this week, when they reported on the fact that Donald Trump is, I guess you could call it, getting the old band back together. Um, and he held a meeting recently down at Mar-a-Lago with some of his most trusted political advisors, including Bill Stepien, Jason Miller, Dan Scavino, Trump Jr. and of course the embattled Brad Parscale, who should, should have a trial coming up soon. I’m, I’m, I’m pretty certain. Um, but anyway, he puts together this little brain trust and Jared Kushner wasn’t a part of it.

Jared Kushner has been by Donald Trump’s side since the man announced that he was even running for president back in 2015. Kushner has been there every step of the way. Kushner was neck deep with him in the Mueller investigation. Kushner went around the world, you know, meeting up with Erik Prince from Blackwater, talking to foreign leaders from the UAE. Kushner was there every step of the way, but somewhere in the last year or so, due in part to the failed COVID response and of course the election loss, Donald Trump really soured on Jerry, Jared Kushner. He wasn’t happy obviously with his COVID response and his little shadow taskforce that he was running, but he was even more off about the fact that he lost the election and of course, Trump can’t take blame for it himself. So he has to blame people like Jared Kushner. So Kushner gets cut off or did Kushner simply walk away?

See, that’s what we don’t know, folks. There’s some drama there that we kind of need to know about, right? Me personally, I want to know what the hell happened with these investigations. Like they were looking into Kushner’s finances, right? We need to know what in the hell was going on with that because I kind of have a feeling this kid probably belongs in jail. But nevertheless, Donald Trump is planning this grand return to politics and Kushner is no longer a part of it either by Trump’s choice or by Kushner’s choice. We may never actually know the truth here. But CNN does mention the fact that Ivanka herself has kind of cut off everybody from politics. She, she apparently doesn’t even like people talking politics around her right now. It’s a sore subject, sensitive for her. She just wants to back to the socialite life and I’m sure Jared Kushner does too.

They want to just be welcomed back into New York’s elite society without any reminders of their hellish four years of being scrutinized and ridiculed while they served with Ivanka’s father in that administration. But one thing I have to hit on here, and this actually has nothing to do with Jared Kushner. As I mentioned, the meeting that took place, Bill Stepien, who was Trump’s former campaign manager, Jason Miller, who’s just an advisor, social media director for the White House, Dan Scavino, Trump Jr. and of course Brad Parscale who had that very public meltdown and is accused of misusing millions of dollars in campaign funds, these people are idiots. Like, what does Donald Trump think he’s going to do with this gaggle of morons who don’t know anything about politics?

I mean, even Before Parscale became the campaign manager, he was another social media guy. So you got two social media guys. One of whom might end up in prison. You got Donald Trump Jr. who actually conveniently, might also end up in prison. And then you got these other two idiots who just ran your failed campaign. So what are you meeting with them for? I mean, look, I want you to lose whatever you do in life and I do mean whatever you do in life. I hope you lose everything. If you go play a game of connect four with Barron, I hope he defeats you every round, every time without question. But my God, talk about not being able to learn from your mistakes. You had already assembled a team of some of the dumbest political people we could imagine and then after they disappoint you, you bring them all back in and say, all right, gang. Now what? No, now what is you fire them and you never talk to them again because they’re just really, really bad at what they do.