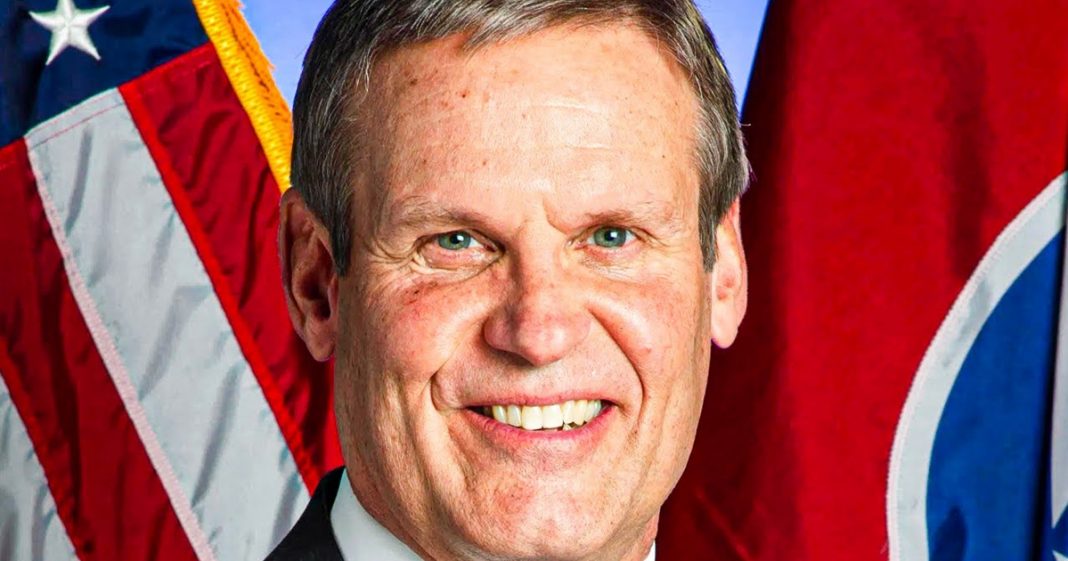 Bill Lee, the Republican governor of Tennessee, has signed a bill into law this week that increases the penalties for protestors, making most of the actions we’ve seen by protestors into felonies. This move would actually strip the right to vote away from these protestors, as those with felonies are not allowed to vote in Tennessee. This is an egregious violation of First Amendment freedoms, and an assault on basic Democratic rights, as Ring of Fire’s Farron Cousins explains.

Bill Lee, the Republican governor from Tennessee signed a bill into law this week that actually increases the punishments for protestors in the state of Tennessee when they get a little unruly. And the law is intentionally written, very vague, as most of these anti-protestor laws are, to give the state, the Republican controlled state, the leeway to charge people with greater offenses. And in Tennessee, if you have a felony conviction, you lose your right to vote and wouldn’t you know it, part of what this legislation that Bill Lee signed into law does is it increases the classification of a lot of these protesting crimes. So instead of it being a misdemeanor, oh, suddenly it’s now a felony, which means if you get convicted, you no longer have the right to vote in the state of Tennessee. Here it is. The new law stipulates that people who illegally camp on state property will face a class E felony punishable by up to six years in prison.

People found guilty of a felony in Tennessee lose the right to vote. Also slaps a mandatory 45 day sentence for aggravated rioting, aggravated rioting. Riot, by the way, is one of those very vague legal terms. You know, what is a riot? What is the definition of a riot? That is up for each individual case to decide. That’s terrifying. Um, 45 day sentence for aggravated rioting, boosts the fine for blocking highway access to emergency vehicles and enhances the punishment for aggravated assault against a first responder to a class C felony. So what we see with that is, yeah, sure, you should never go and assault a police officer or any other first responder. But in a lot of these scuffles that we see taking place on videos, yes, you do see, you’ll see cops hit somebody. You see somebody kind of do this back to them.

We’re not actually seeing cops really get, you know, the hell beat out of them. But what this means is that when you make that motion and you go over and you hit that police officer on their, you know, riot helmet, and they can’t even feel it, you’ve just committed a felony now in the state of Tennessee. And if you’re convicted and if they have it on video, you will be, you’re going to face felony charges and you’re going to lose your right to vote. That is what is at the heart of all of this. That is why you increase the classification of what these crimes really are. What this really is though, is an egregious violation of our first amendment rights. You can’t be on state property, you know, camp and that’s another word by the way, um, that’s very vague. You know, camp, does it mean just stay there for two hours? Does it mean stay there overnight? Does it mean actually set up a tent and start a bonfire and make smores?

Again, I’m not saying that to be cute, that is a very vague legal term, camp. So that opens the door to prosecuting more people for protesting on state property and again, that would be a violation of the first amendment of the United States. These people in Tennessee have a right to peaceably assemble the same way the rest of the country has that right. And every few months we’re seeing more legislation like this get signed into law at the state level, always by Republicans, that tries to limit that scope because protests challenge power. Challenging power scares those with power. So they use the power they have to limit the power you have and the more they do it, the less power we have and the more authority they have, this moves us into authoritarianism. This is the slippery slope. This is how these things progress and Tennessee wants to be on the forefront of the March to authoritarianism here in the United States.