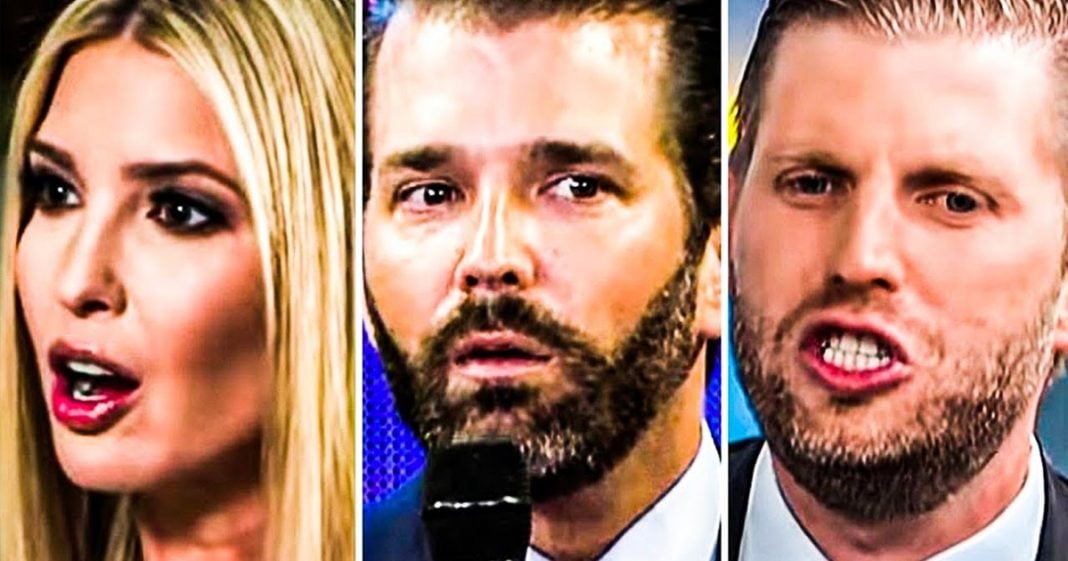 According to a former prosecutor, the real people in trouble from the New York investigation into the Trump organization might be Trump’s children, and not Trump himself. At the end of the day, it all comes down to who put their names on what documents, and that is actually likely to be his children. This entire legal drama could unfold with the family tearing itself apart in order to blame each other, and Ring of Fire’s Farron Cousins explains what we might expect from this.

Last weekend on CNN, a former prosecutor from the Manhattan district, man by the name of Daniel Alonzo, talked to CNN about why Donald Trump’s children, Don Jr., Eric and Ivanka, might actually end up being in more trouble than Donald Trump himself. In fact, Donald Trump, the former president might not even get charged with anything here and his kids may be the ones to bear that responsibility. Here’s why he says this. Obviously in a case like this, when you’re talking about potentially falsifying values and submitting them to bank, submitting them to the IRS and other tax authorities, there’s going to be a signature on those documents and ultimately it is going to come down to whose signature is on that document. If Donald Trump, Sr. is the one who signed it, great, you go prosecute him. But if it was any of the other, which would be again, Don Jr., Eric or Ivanka, they go down for it.

It doesn’t matter at that point, if daddy directed them to do that. Now, let me ask you this. Do you think Donald Trump himself was meeting with these banking executives to get these loans? Or do you think maybe that that’s such a common mundane task, he may have sent someone else to do? You know, somebody that he trusts enough to get the loan, somebody like Ivanka or Don Jr. Willing to bet, probably didn’t send Eric on that particular task, but I do think it is very likely that this is something that Ivanka would be sent to do or Don Jr, or maybe one of them with Eric to kind of hold his hand and show him like, this is how we do it. This is a bank, ooh, they got money in here. So again, this prosecutor says, it’s likely that the kids are going to take a harder fall than Donald Trump.

Now something that wasn’t mentioned in this interview, and it’s something I’ve been thinking about, and I do want to talk about it. Another reason his kids may take a bigger fall than him is because Donald Trump is the former president of the United States. Right? Prosecuting a former president of the United States is uncharted territory here in the United States. We know that Cy Vance, does have a little bit of a grudge, I guess you would call it, against Donald Trump. That’s not deniable. But I don’t think that’s directing his prosecution. So maybe he is going to say, you know what, I’m going to do this. Or maybe when it comes down to it, they’re like, look, the optics, international optics of charging a former president with this kind of fraud, this kind of criminal activity, is going to weaken the United States. That’s a potential thing they could say, an excuse really, that they could make.

And that’s terrifying. So they may say, well, listen, instead of going after him, instead of putting the former president in jail, we can get the kids. We can get Don, Ivanka, Eric, get them all in jumpsuits, give them three to five and we call it good. So that’s another real possibility. The other thing that could happen, if any one of these scenarios plays itself out, is that we will see a family civil war, the likes of which we haven’t seen since the era of soap operas here in the United States. That’s what could be at play. None of these individuals want to go down. But if it is say, for example, Ivanka’s signature on the banking document, where they, they lied about the values of something, which is what they’re accused of. If that happened, Ivanka could try to argue, no, no, it was daddy who said this and daddy would have to come out and either say, yes, I did.

I’ll take the fall. Do you think Donald Trump, is that kind of guy even for Ivanka? Or do you think he would say, no, I didn’t do that. It must have been Don Jr. It’s going to be a civil war within this family, if any of this happens and that is a big IF. I know, we like to think that the evidence is there, that everything is all wrapped up and coming to a head right now, but we don’t know what they have. Michael Cohen could have been blowing smoke this entire time. Guy’s been known to lie. So got to wait and see. But I think the Trump family is a little more anxious about what’s about to happen than the rest of us are.