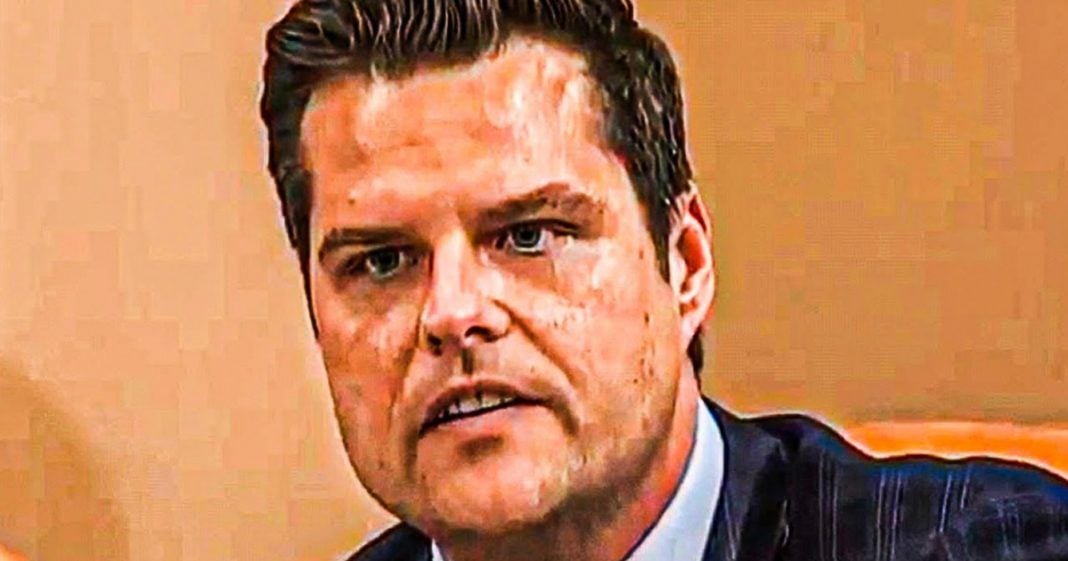 Republican Senator Ben Sasse has had enough of the clowns within his party, especially people like Matt Gaetz. Recently, Sasse called out Gaetz for his immature behavior and fawning over Donald Trump, suggesting that this isn’t the kind of person that anyone should be taking seriously. Gaetz isn’t in politics to make anyone’s life better or even to enact change, he is in politics to become popular, much like his mentor. Ring of Fire’s Farron Cousins discusses this.

Republican Senator Ben Sasse has had it with some of the idiots trying to take over his Republican party and one of those idiots happens to be my representative Republican Matt Gaetz. During a recent interview with Politico, Sasse lashed out at Matt Gaetz for his immaturity saying, that guy is not an adult. It’s a simple statement, but it tells us so much about what the real people within the Republican party actually think about Matt Gaetz and he’s absolutely right. What we have seen from Matt Gaetz in the, you know, handful of years that he has been in Congress has been nothing short of juvenile. The very first thing that guy did when he got to Washington, DC was proposed legislation to abolish the EPA, right? This guy, by the way, represents a district here in Florida that is 100% dependent on environmental tourism, the beach, and his first move was to say, let’s get rid of the one agency that’s protecting my district and their economic activity.

And ever since then, like that might be one of the most mature things he did because he only got more juvenile from there with his non-stop support of Donald Trump. His, um, adolescent, I guess, infatuation with him is the best way to say that. I have often said Matt Gaetz, you know, kind of acts like a, a school child seeing their, their teen idol, you know, Justin Bieber comes to mind, but I know that kind of shows my age because it’s, you know, I don’t even know if he’s a thing anymore, but you know how the, the crowds used to scream and cry for, for Justin Bieber or way back in the day, like the Beatles. That’s how Matt Gaetz is with Donald Trump and Ben Sasse called him out for it and good for Ben. Ben is also, by the way, facing censure from his Republican party back home in Nebraska, for not blindly supporting Donald Trump.

So Sasse kind of at this point is like, you know what? I don’t care. I got nothing else to lose. I’m going to come out guns blazing against these idiots that are destroying my party. And to that, I say, Ben, look, y’all deserve what’s coming at you. You know, you guys sat silently by for decades as your party morphed into what it is today. Okay? This is not something new. This is not something that happened overnight. It is not something that is unique to Donald Trump or even Matt Gaetz. This is something that the Republican party slowly turned into right before our eyes. You were a part of it, Ben, whether you want to admit it or not and even though I agree with you about Matt Gaetz being immature, and I’ll add one more for you, has done nothing for his district here in Northwest Florida.

I don’t even know if the guy ever comes back here anymore. Other than, of course, to do TV appearances from his, from his home. That’s all Matt Gaetz wants, by the way. But again, Ben Sasse, you sat by and you watched all of this happen and you stayed a part of it. But I actually do want to hit back on that one, one more time. Matt Gaetz, does the guy have any future in the Republican party? Does he have broad enough appeal to actually become more powerful than he is now as a representative of Florida’s, you know, kinda a little bit podunk, uh, first district and that’s not an insult, I’m just saying we’re not a huge metropolis here, we’re a beach community. Right? Does he have the power to win an election outside this district? I don’t know. He might be able to win, you know, a Senate race here in Florida, possibly. But beyond that, I don’t think the man has broad enough appeal to ever move past that.

And I don’t even know that that’s what he wants. He would want it for the attention, but what the guy really wants is a contract with Fox news. Right? You don’t build a TV studio in your home if that is not your primary goal and I know that sounds weird saying that from the TV studio in my home, but come on, Matt Gaetz loves the camera. He jumps at every single opportunity to get in front of one and talk. It is what this guy loves. If he ever is no longer in United States politics, you had better believe it will happen lickety split that this guy will either have his own TV show, a web show, a podcast, or possibly a combination of all three, because that is what Matt Gaetz wants because he’s not an adult. He took an adult position as a representative, but he is doing nothing for this district other than putting his face out there and making us all look like bumbling idiots and that is what he wants. Good publicity, bad publicity, it’s all the same for Matt Gaetz as long as it gets his little juvenile face on television.