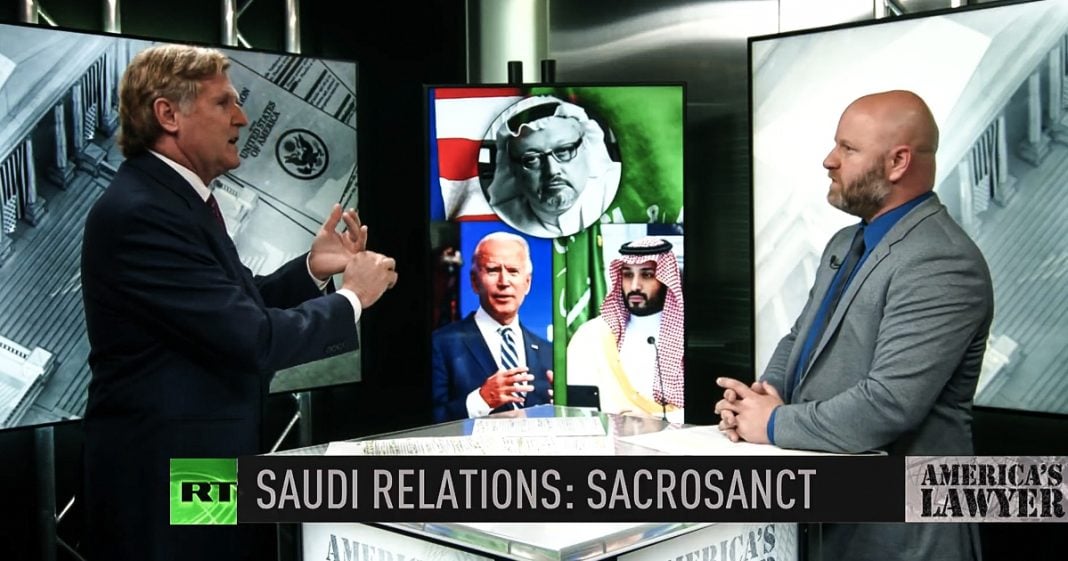 Mike Papantonio:             President Biden says he doesn’t want to ruffle any feathers by going after Saudi Arabia for murdering journalist, Jamal Khashoggi. Joining me to talk about that is Farron Cousins from the trial lawyer magazine and honestly, one of the best progressive commentators in the business. Thanks for joining me.

Mike Papantonio:             Look, as I, there, I’m really missing something here because when Biden was running for president, he talked about Saudi Arabia as the evil empire, basically. You remember that?

Mike Papantonio:             The pariah. Okay. So what has changed here is again, I come back to, to, The Dissident, the movie, The Dissident. You’ve got, if you’re watching, you’ve got to watch that show, The Dissident, to understand how corrupt and ugly this family is. So what we have is Biden day one saying, I’m going to change our policy. We’re going to, his term was recalibrate. Remember?

Mike Papantonio:             Well, what does recalibrate mean for this president? Maybe you can tell me.

Farron Cousins:                  Well, I, I wish recalibrate meant reanalyze our relationship with Saudi Arabia, maybe start looking at them with an actual critical eye, but unfortunately, Biden proved within the last week that he is actually not willing to do any of that because he doesn’t want to upset Saudi Arabia. He doesn’t want to make these people mad and at the same time, they released this government report showing that they absolutely know for certain that the Saudi crown Prince ordered the murder of Jamal Khashoggi, oversaw it, not physically there, but made sure it happened. He was in, involved, basically. He said, go kill this guy and they did it.

Mike Papantonio:             Well, as you watch The Dissident, you’ll come to the conclusion, maybe he even watched because they had televisions set up exactly where it was all taken, and there’s speculation that, that MBS actually watched what was happening. So here, here we have detailed intelligence. They, they, they cut off his arms. They tortured him first. They captured him. They tortured him. They cut off his arms. They cut off his legs and then they burned the body. And we don’t want to ruffle their feathers because why? Because we’re selling them weapons and making billions of dollars in weapons. Because we have this oil alliance that we never should have. If Biden will go back to the other thing he said is we’re going to solve climate problems and we’re going to go to alternative energy, maybe we don’t worry about MBS. But this story, every time we turn, every time you’d kick another, another log over, it gets ugly. So people said, look, why don’t we at least do to him what we have done to Maduro, what we’ve done to other dictators around the world, where we don’t let them come to the United States. We don’t, let’s see, Assad, didn’t we do that?

Mike Papantonio:             Kim Jong-un, we said, you can’t travel. We said, you know, we’re going to cut off your travel. Why can’t he do it, this guy is a murderer. I mean, he’s a psycho murderer and running, running a, a country where everybody’s under his thumb and the country is being really run by radical clerics. And the reason he lets that happen is because he’s afraid he’s going to lose control of Saudi Arabia.

Farron Cousins:                  Absolutely. And let’s not also forget, you know, they, they dressed up one of their own in Khashoggi’s clothing so that he could walk by the exterior security cameras to make it look like he was leaving. So, so that’s just another piece of that puzzle here too. But, you know, Biden last week also talked about, I’m going to put more sanctions on Venezuela. I’m gonna throw some sanctions on Russia because I don’t like what they may have done to this guy. So he’s willing to sanction people, but he’s not willing to do it to Saudi Arabia. He’s taking these countries that, that actually need help instead of sanctions, sanctioning them. Then this country that needs sanctions, he’s saying, I don’t want to upset you. What else can I get for you? I mean, he’s like the waiter at a restaurant.

Mike Papantonio:             He is, he is MBS’ personal concierge because of all the money he got from Raytheon, that he got in his campaign, from McDonnell Douglas, from all of the, every two-bit military contractor or military weapons sales person sent him millions of dollars. And now they’re saying, oh, you can’t make this guy mad because if you do, we’re going to lose all this business. And oh, by the way, what about oil? But now think about this, Venezuela, people are eating garbage in the streets. Okay. They, they, they don’t even have, they don’t have food, they don’t have water, they can, they don’t have medicine and we’re sanctioning Venezuela and we’re sanctioning Kim Jong-un. Yeah, the guy’s a total freak. He’s a total creep. But it’s kind of the same setup over there. So Assad, we, the way we deal with them, is we say, you are a national, international thug, we will not allow you to come to the United States. They could do the same thing here, but they choose not to, right?

Farron Cousins:                  Right. They, they welcome him when he comes to the United States. You know, how many times did we see George W. Bush kissing the ring and bowing down and holding hands and showing them around the White House, like they’re, they’re best buddies because they are. And this is obviously one of the few times when you have the US government willing to be bipartisan, love of Saudi Arabia happens with both, or the Saudi Royal family, happens with both the Democrats and the Republicans. And meanwhile, you do have this regime that treats their citizens like insects.

Mike Papantonio:             Well, it’s a regressive, obsolete, thuggish regime that only stays in, and basically what they’ve done is they’ve claimed all the natural resources for themselves.