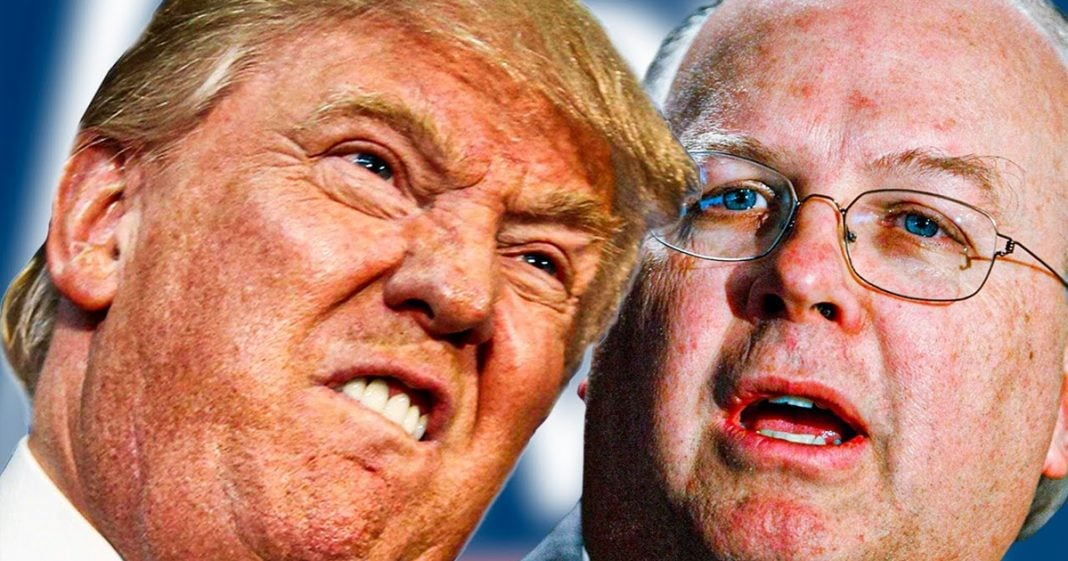 Donald Trump issued a stern letter yesterday, telling Fox News that they needed to fire “loser” Karl Rove because he has no idea what he is talking about. Trump repeatedly called Rove a “loser,” which is odd considering Rove turned one of the worst candidates of all time into a two-term President. Ring of Fire’s Farron Cousins explains what’s happening.

Donald Trump is not happy that political advisor Karl Rove is still welcomed at Fox news. So yesterday he sends one of his little letters, makes it look totally official, you know, on his little, you know, the office of the president letterhead, where he demands that Fox news fire Karl Rove, because as Donald Trump says in his letter, Rove’s just a big ol’ loser. So you got to get rid of it. Here’s some wonderful little snippets from Donald Trump’s letter. Karl Rove has been losing for years, except for himself. Like that’s, that doesn’t even make sense, okay. So let’s just start with this first sentence, Karl Rove has been losing for years, except for himself. Karl Rove hasn’t, um, run for anything. He, he’s really not as respected or as admired as he used to be. So he’s not, he’s not winning in that sense.

Like, that’s honestly what I want to know Donald, are you seriously comparing and my God, you’re actually making me defend Karl Rove here for a moment and I hate you even more for that. Are you really going to compare your record, your electoral record, versus Karl Rove’s? Because yeah, I am, I’m pretty sure Karl Rove wins that fight. Hell, if you even compared Begala and Carville to Rove, Rove has the edge on that as well. Like Rove is an evil son of a, there is no question about it, but he is good at what he does. Rove turned one of the dumbest human beings to ever run for president, a guy who was essentially laughed at by all of America, somehow turned him into a two term president, George W. Bush. Meanwhile, you, on the other hand, Donald, couldn’t even win the popular vote in two different elections and I know George W. Bush didn’t win it in 2000, but he did come back and sealed the deal in 2004 with a lot of help from voter suppression.

But Trump had even more help from voter suppression and still couldn’t get the popular vote. Karl Rove is many things, many, many horrible things, but stupid or bad at his job, those aren’t things that describe Karl Rove. Karl Rove is the real deal and though I disagree with him on a 100% of things, I can still acknowledge the fact that he does know what he’s doing and he is actually a rather terrifying individual to have to go up against in the political arena. Donald, this is a fight you’re not going to win. As I said, Karl Rove is good at what he does and he has been around a lot longer than you and he has been far more successful in politics than you could ever imagine. So I encourage you, drop this fight now because just like you, Rove plays dirty, except he’s just a little better at it than you could ever hope to be.