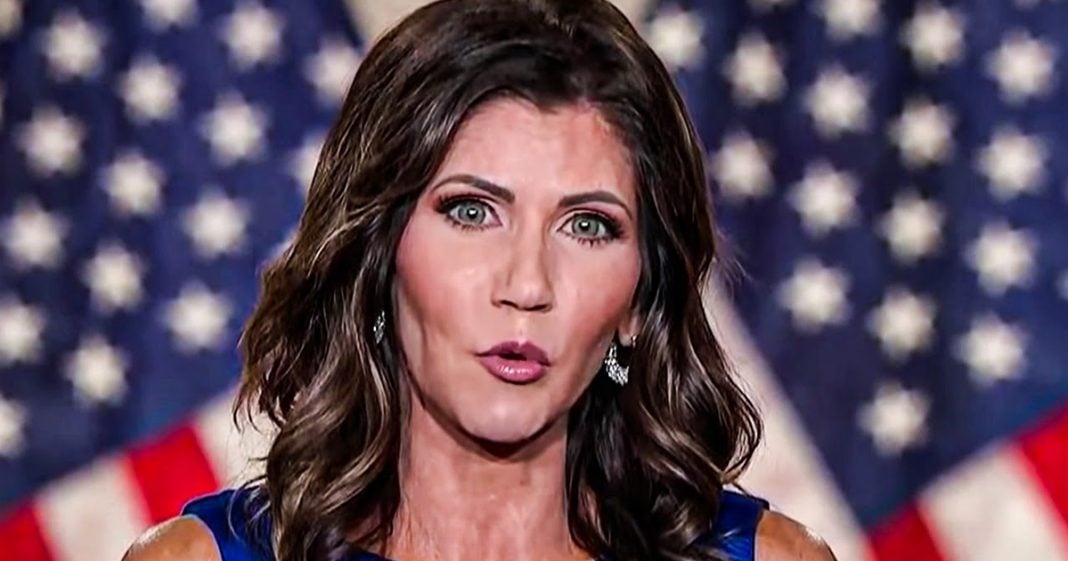 Republican South Dakota governor Kristi Noem has some questions to answer now that it has been revealed that her actions as governor allowed a ranch owned by her family to get their hands on $600,000 worth of COVID funds from the state – a sum that only 4% of businesses in South Dakota were privy to. Prior to Noem’s order as governor, the family ranch would have only received $100,000 from the state. Ring of Fire’s Farron Cousins explains what’s happening.

South Dakota governor Kristi Noem has become a bit of a rising star within the Republican party. Ironically, she’s becoming a rising star with the Republican party for the way that her state has handled COVID-19, which is by not handling it at all. By trying to act like South Dakota’s some kind of independent state, we don’t want your help. We don’t want your mask mandates. We don’t want your social distancing. We’re Cowboys and girls out here, and we just don’t want to do it and Republicans across the country thought, wow. Yes, that’s very good. Good, this is what we want in our party. So anyway, she’s a rising star, a report came out in Washington Post this week, showing how she helped her family’s own business secure hundreds of thousands of dollars, $600,000 to be exact, in COVID relief funds available from the state. Now, before I tell the story, let me make it clear, there’s absolutely no evidence at the moment that anything that was done here was illegal or improper.

But it certainly raises a few eyebrows, doesn’t it? See, here’s what happened. The state legislature passed legislation that opened up $100,000 to businesses in the state of South Dakota if they could prove, I think it was a 15% reduction in revenue due to COVID-19, you can get this hundred thousand dollars. That’s what the legislature passed. Noem came out, adds her own little, I guess, signing statement or executive order and she ups the limit after, by the way, her family’s ranch had already qualified for the money. So she comes out and says, you know what, we’re bumping it up by another half million dollars, by $500,000. So now you can qualify for $600,000 and so of course her family’s ranch got more money. Her brothers got a hundred thousand dollars for their business, according to the Washington Post, and we don’t know what, what that business is.

It wasn’t mentioned in the report. And again, it is important to point out that there is no speculation at this point that she did anything illegal. But again, God, certainly raises some eyebrows. You knew your family had already qualified for these relief funds and then you come out with the stroke of a pen and you say, you know what, I’m going to let people get some more money. She also, by the way, is the one who asked, in her state, if, here it is, Noem asked the state Supreme Court directly to weigh in on whether lawmakers could benefit either directly or indirectly from the program, as lawmakers had inquired, whether they could apply for grants. So Noem went to the state Supreme Court too after that, and is like, hey, um, can, can we get some of this?

I mean, you know, we’re here, there’s extra money. People aren’t claiming it or we’re denying enough claims, maybe, I don’t know. But, uh, yeah, I mean, is it cool if I and some of my friends in the Senate here, the House and Senate, can we just take a little? What, what, what, what an absolute Republican thing to do. Like, that’s the best way to describe that. This is such a Republican thing to do. It’s also very reminiscent of what transportation secretary Elaine Chao had done with her family’s businesses. So, uh, yeah, I, I think Kristi Noem here is kinda treading a fine line, shall we say. May not be illegal, certainly looks dubious to the public and this is the kind of thing that can absolutely send a rising star crashing back down to the ground.