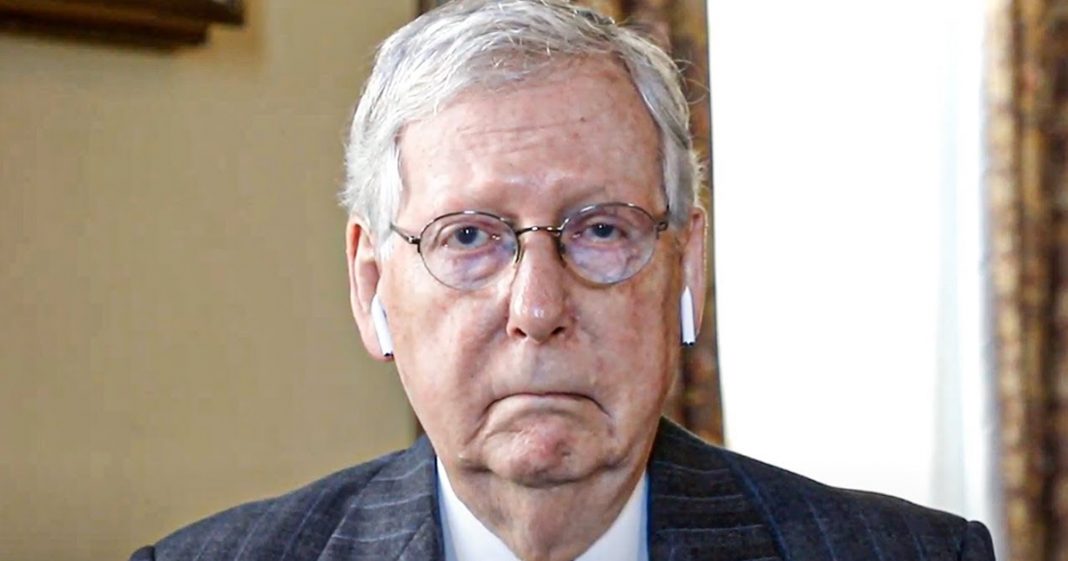 Mitch McConnell is starting to worry about surviving his current term in office due to his advanced age, and he has apparently been working with the Kentucky governor to come up with a list of suitable replacements in the event he kicks the bucket before his six-year term ends. This is just one of many reasons why we need either term limits or age limits on members of Congress, because the people of Kentucky voted for McConnell, not a list of people McConnell wants to see in office. Ring of Fire’s Farron Cousins discusses this.

Mitch McConnell apparently doesn’t think that he is going to survive his seventh term in the United States Senate. Mitch McConnell is currently 79 years old and he just started a new six year term, meaning by the time the next election happens, the man would be 85 years old. And we had all seen those pictures of him just a couple months ago with his hands and face all bloodied and bruised up and we still don’t even know what the hell actually happened to the guy, but clearly, yeah, not in the best physical shape. And so what he has done is he is working on a list, a list of people that would be acceptable replacements for him should he not make it to the end of his term. And by the way, we’re not talking about an accident. We’re not talking about, you know, something, outside forces acting upon Mitch McConnell, by any stretch, we’re talking about just his advanced age and him possibly not making it to the end of his term, you know, dying of natural causes.

So I don’t want people to get the wrong impression about that. This is strictly about dying of natural causes. But anyway, so he’s put together this list of three names, submitted it with the governor of Kentucky who happens to be a Democrat, except there’s just one issue. Mitch McConnell knows, obviously the Democrats not going to appoint a Republican to take this seat. So Mitch McConnell is also at the same time, pushing a bill through the Kentucky state legislature, he’s obviously not pushing it directly himself. He’s pushing lawmakers for it and this bill would actually give the state parties the authority to replace a deceased Senator instead of giving that power solely to the governor. And what this would do would create a little panel for each party. Each party gets to pick your people to be on the panel.

And then that panel would get to pick the replacement instead of the governor. So if a Republican dies, the Republican panel gets to pick the successor. If a Democrat dies, the Democratic panel gets to pick the successor. Right now, the law on the books is that the governor being another elected official gets to pick the successor and even that, to me, let’s be honest, like I’m not okay with that either. The people of any given state got together and said, we want this individual, okay. It’s not like they have running mates so that you can say, well, I like this one and the person they’re running against. So if this person something happens to them, the running mate, I’m choosing that. They chose one person. So if something happens to that one person, immediately what should happen is a new campaign should begin and in the meantime, you don’t have a Senator. Sorry, that’s the way it goes.

Maybe think twice before electing an 80 year old, who has been in office since I was two years old. Think about that for a minute here, folks. In addition to all this, Mitch McConnell’s sneaky dealings with the state legislature, his list of possible successors, this man has been in the Senate since 1985. I was two years old, two years old when he won his first election, two, and I’m almost 40 now and this guy has been in the Senate for that entire time and just won another election. Can we please, for the love of God, get some term limits going here or based on Mitch McConnell’s own actions here, having to come up with a list of suitable replacements and having to try to change state law so Republicans can retain the seat, maybe it’s time to think about some age restrictions. I mean, hell we already tell people you’re too young to be in office.

We have laws against that. Maybe it needs to go the other way too. Mitch McConnell clearly thinks he’s not in good enough health to make it six years. You got Diane Feinstein who, you know, her memory and her mind appears to be failing, based on reports. Nancy Pelosi’s been in office so long, she doesn’t think that showing off, you know, all of her collection of expensive ice cream is somehow detached from reality. All of these people need to go, but their districts and their States continue to vote for the same people because they’re scared to move on. Don’t be scared. Move on from these individuals. Rip it off like a band-aid and never look back. Because if you keep doing this, they’re all gonna end up trying to pull crap like what Mitch McConnell is doing now and that is to basically ensure that his seat stays in the hands of a Republican and he’s going to continue basically pulling the strings from beyond the grave.