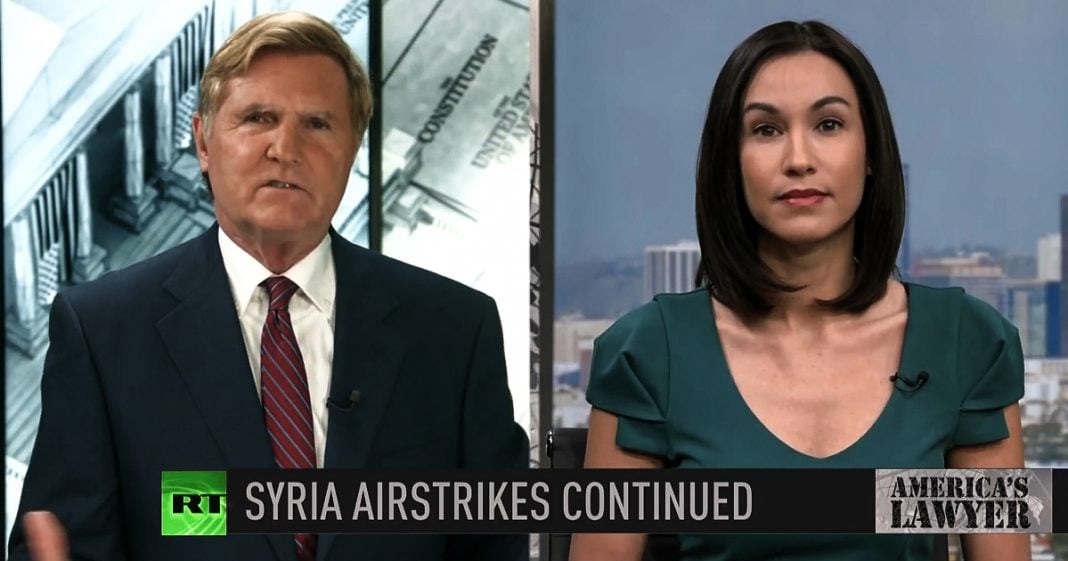 Via America’s Lawyer: President Biden faces scrutiny for green-lighting airstrikes in Syria, justifying them as retaliation for last month’s rocket attacks on a U.S. base in Iraq. RT Correspondent Brigida Santos joins Mike Papantonio to discuss the way these strikes are authorized, and how Biden’s own press secretary is backpedaling on her previous defense of sovereign countries.

Mike Papantonio:             President Joe Biden is facing backlash from some members of Congress after authorizing airstrikes against Iranian targets in Eastern Syria, killed at least 22 people. Brigida Santos is with me now to put this together for me. First of all, why did Biden approve last week’s airstrikes and which facilities were targeted? I mean, as you look at this story, there’s so many facts flying around, try to break it down so we really know what happened. Why was the strike taking place?

Brigida Santos:                   Sure. Well, last week the US dropped seven 500 pound bombs on buildings in Syria that were reportedly used by Iranian backed non-state militias. Now the strikes reportedly come in retaliation for rocket strikes on a US led coalition base in Erbil Iraq last month that killed a foreign allied private contractor and wounded a US service member and four American contractors. Now Biden tells congressional leaders that the latest airstrikes were launched in accordance with America’s right to self-defense under article 51 of the United nations charter. The problem is it’s unclear whether the group that took credit for the February attacks in Iraq is backed by Iran or even related to militias that use the Syrian facilities bombed by the US just last week. And the reason they did this in Syria was because they did not want to off the Iraqi government. So the Biden administration carried out these strikes just over the border of Iraq in Syria.

Mike Papantonio:             Aren’t we already seeing a pattern here? Okay. We talk, you know, Biden goes in and we have these sanctions that he issues against Russia and Venezuela and, you know, parts, partly China. It’s almost, and now we have these attacks taking place. It’s almost like we have Blinken out there trying to say, okay, where is the best place for us to sell our weapons? Because if you think that these sanctions aren’t an issue to where it, all it does is antagonizes these countries further, whether it’s Russia, whether it’s China, whether it’s Venezuela, whoever, and now we say, oh, by the way, we’re going to drop a few bombs. 500 pound bombs. You know, Biden says attacks were legal under international law, but some members of Congress, they disagree. Why, why is that?

Brigida Santos:                   Well, a few members of Congress, including House Democrats Ro Khanna and Ilhan Omar, say Congress must authorize military action that’s not in self-defense against an imminent threat. Democratic Senator Tim Kaine also agrees with this sentiment. Now over the years, Congress has increasingly handed its war declaring powers to presidents in both parties. Last year, the Democratic led House actually tried to reclaim Congress’s war powers when passing a resolution to reign in president Trump’s use of military force against Iran. That resolution was ultimately vetoed, but the point is the majority of Democrats back then wanted to check presidential authority on military action, even White House press secretary, Jen Psaki, previously expressed concerns about the issue. Back in 2017, she tweeted a response to the Trump approved bombings stating quote, what is the legal authority for strikes? Assad is a brutal dictator, but Syria is a sovereign country. However, now, when it comes to the Biden administration Syria airstrikes, she says the president quote, has the right to take action in a manner of his choosing.

Brigida Santos:                   Well, it’s obviously derailing any pending plans. The European union had just invited leaders from Washington and Tehran to sit down to discuss the nuclear deal. But Iran of course has now rejected that offer. So for now, nuclear talks are off the table.