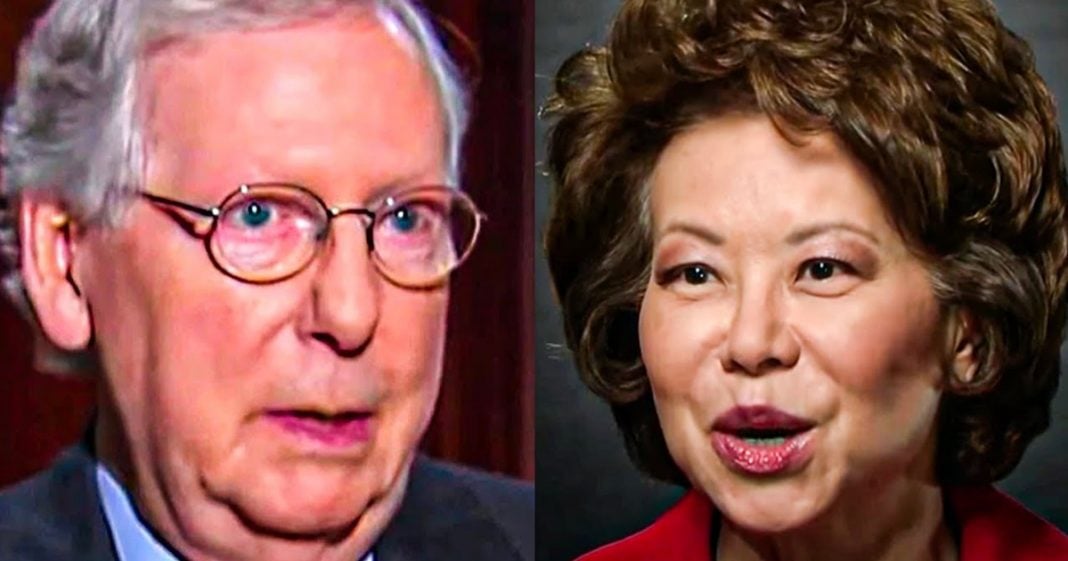 Former Transportation Secretary Elaine Chao was investigated for quite some time during her tenure, but the investigation fizzled out before she left office. Or at least that’s what we were led to believe. The truth is that the Inspector General found numerous instances of ethical violations that were referred for criminal prosecution, but the DOJ refused to go after the Secretary who happens to be married to Mitch McConnell. Ring of Fire’s Farron Cousins discusses this.

Former transportation secretary Elaine Chao, the wife of then Senate majority leader Mitch McConnell, had been under investigation for I think a little over a year. We had discussed the investigation, basically what the inspector general was trying to find out was, was Elaine Chao doing two things. One, was she steering contracts toward Kentucky to reward Mitch McConnell, her husband’s donors and number two, was she doing things to benefit her family’s businesses as transportation secretary. And up until yesterday, we hadn’t heard a word about these investigations. Most of us were led to believe that these investigations just kind of fizzled out and maybe there was nothing there. Maybe they just, you know, fell by the wayside when she left office, but it turns out neither of those are true. This investigation did not fizzle out and it was actually referred to the US department of justice for criminal prosecution. And they opted not to do it.

The DOJ under Donald Trump did not choose to prosecute or even reprimand in any way transportation secretary Elaine Chao. It was referred for prosecution in December. Biden’s DOJ for the record, absolutely could still seize on these and go forward with prosecution against Elaine Chao, which they 100% should do. If they’re smart, not just politically, but you know, in the eyes of justice itself, this is kind of the thing that needs to happen to show that you’re taking your job seriously and of course it has the added benefit of exposing Republican corruption that could end up helping Democrats win elections. It’s a win-win for you. What are you waiting for? Move forward with the prosecution. So what’d she do? Well, it turns out that the inspector general was not able to find any evidence of wrongdoing with Elaine Chao steering those contracts towards McConnell’s donors in Kentucky. So that’s not a thing. The family, absolutely, yes.

They did find that she was improperly using her office, along with her family’s businesses. So that’s one of the things. She was also abusing her power, again, by using the family business there, but also having her office look into, I know one example was a student who had received a scholarship from her family’s philanthropy. Like she had her office use their power to look in and see how this kid was doing. So that’s one instance. Another thing she was doing was effectively abusing her staff, not in the throwing staplers at them sense, but in the, hey go buy me Christmas ornaments sense. In fact that’s actually one email that was uncovered where she was telling a staffer what kind of Christmas ornaments to go buy her for her home.

So yeah, this may seem small. It may seem piddly, but I think the deals actually with, between Chao and her family are, are probably where the big, you know, criminal activities would be found if you were to go forward with the prosecution. But look, this woman is corrupt. She abused her office. She abused her power. She abused everything that she had available to her. Prosecute her. The inspector general says prosecute her. They’ve already put together a nice, neat little file for you with everything spelled out very clearly on how to prosecute her and what to prosecute her for. So Biden’s DOJ, what are you waiting for? It’s all there for you, move forward.