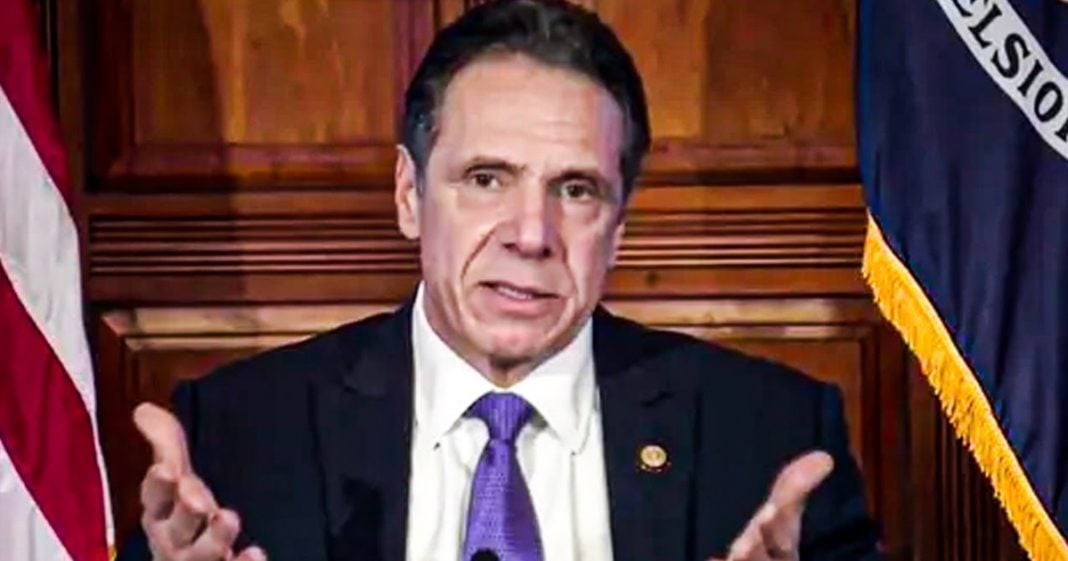 New York Governor Andrew Cuomo addressed the public yesterday, and he finally acknowledged the multiple accusations against him by several women who used to work for him. Cuomo issued a weak apology, claiming it was just his friendly nature getting the best of him, and then went on to state clearly that he would not resign. This is not good enough, and Democrats need to demand that he step down before he gives Republicans the fuel that they need to attack the Democratic Party for the next two years. Ring of Fire’s Farron Cousins discusses this.

New York governor Andrew Cuomo, did a, I guess you’d call it a press conference yesterday, where he announced that he would not in fact be resigning, but he’s totally sorry and he means it, really, deeply that, you know, his, his unnecessary touching and kissing of people, both men and women, he says, you know, totally men and women, there’s hundreds of pictures. That’s a direct quote from him. There’s hundreds of pictures of him touching and kissing both men and women and if that made you uncomfortable, he’s totally sorry. It’s just his dad used to do that. So he does it too. Hey, you can’t teach an old dog new tricks, right? And he’s not resigning. So there you have it. Yeah, sorry I made you uncomfortable with these things that I’m not even really under fire for. I’m going to ignore all of the big issues, ha ha ha, and then I’m just going to tell you straight up, I’m not leaving.

People of New York elected me to do a job and I’m going to do the job, Andrew Cuomo says. They did. They elected you to do a job. They didn’t elect you to sexually harass your staffers. They didn’t elect you to ask these staffers to go and play strip poker with you. Is that something also you learned from your dad? Curious, actually do want to know that, because you said that the, the touching and that’s, you know, just how you greet people, because that’s how your dad did it. Did your dad invite staffers to go play strip poker too, because that’s what you’ve been accused of. And again, you, you admitted that from your little half-assed apology yesterday. Did your dad teach you to lie about the number of elderly people that you got killed in your state? Did he teach you that or was that something you just came up with on your own, Andrew? Because you’re not apologizing for that crap either.

This is absolutely one of the most ridiculous apologies that we have seen from a politician in a long, long time. Didn’t address any of the actual issues, of course, and then at the end of it all says, hey, this is just who I am, deal with it. I’m not going anywhere. The Democratic party machine has to pull every resource away from Andrew Cuomo. You have to completely pull your support from this man. You have to distance yourself and say, we are no longer associating with Andrew Cuomo. We’re done. He is done with us. We’re parting ways, because let me tell you what happens if you don’t. It doesn’t matter that you have Republican leaders in Texas facing potential felony charges. It doesn’t matter that you have a Texas governor reopening a state to let people die after he just let people die in a snow storm. It doesn’t matter that you have a Florida Republican governor who is a bumbling buffoon and has absolutely botched his state’s COVID response. All the incompetence and corruption of Republican governors means nothing when conservative media has a single Democratic governor to point to and say, look at how corrupt the Democrats are. They ignore the dozens on their side if they can focus on one Democrat.

So what happens then? You have the media pick up the narrative of Cuomo, before you know it, every network is only talking about Cuomo and so the corruption of people like DeSantis in Florida, Abbott in Texas, Kemp in Georgia, all of that gets swept under the rug and these individuals get to do whatever the hell they want with no consequences. The longer Cuomo stays in office, the more he draws the media attention onto him, and the more he provides cover for these Republicans and the more he provides fodder for the Republicans to run horrible ads against Democrats tying every single one of them to Cuomo because that’s what’s going to happen. They’re going to run ads all over the country, no matter if you’re running for a House seat in the state of Florida or a House seat out in Montana, if you’re a Democrat, they’re going to run ads tying you to Andrew Cuomo. Kick him out of the party today because demanding that he resigns didn’t do it. So kick him out, say goodbye, cut your losses and move on. Or else I promise you, it’s going to cost you a hell of a lot more in the future.