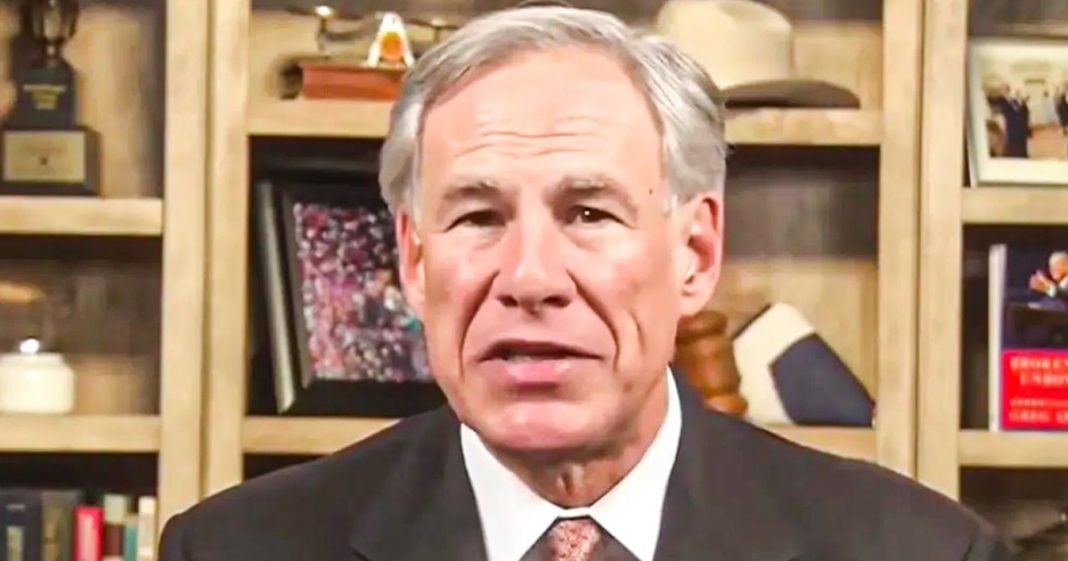 Republican governor Greg Abbott of Texas has decided that he’s ok with letting even more Texans die, and he has now lifted the state’s mask mandate and told ALL businesses that they are cleared to reopen. Texas is now the largest state to make this move, and the timing of it is not a coincidence – Abbott is hoping the state draws in tourists for Spring Break with his decision. Ring of Fire’s Farron Cousins discusses this.

Republican Texas governor Greg Abbott has apparently decided that he didn’t let enough people die during recent winter storm Uri. So he decided to announce yesterday that he is lifting Texas’s mask mandate and telling every single business in the state, you can be open. Restrictions are gone. Let the bacchanal begin, basically is what Greg Abbott said. So Texas is about to become yet another super spreader State, again. Right now they’re number three in total number of COVID cases behind New York and California. I think it’s actually California, New York. They could easily overtake them now thanks to governor Abbott’s decisions and what an idiotic thing to do just from a political standpoint, like let’s ignore the fact that he’s ignoring the science for just a moment. Talk about the fact that this guy is already so embattled, like in so much trouble with his voters over the energy grid, the energy bills, the overall response to winter storm Uri. Like, you’re so screwed as it is.

So you’re just like at this point, screw It. You know what? I’m taking away the mask mandate, I’ve been double vaccinated, so I’m good to go, Abbott, and y’all just out there, die if you want, I don’t care. I don’t care. That’s the message that Greg Abbott is sending. I don’t care if you live or die. I didn’t care if you live or die in the storm, you me off by coming after me after that. So I’m taking away the one line of protection you had, that thin line of fabric over other people’s mouth holes. What a scumbag, right? What an absolute horrendous human being. Like, this is Disney villain level of evil that we’re talking about here. The other thing too, though, there, there’s a reason that he’s doing it now. It’s not just because winter storm Uri and his anger over the voters for that, it’s spring break. Spring breaks are beginning to start all across the South down here, Texas has huge beach communities and they want people to be able to come to Texas. Mississippi, by the way, also along the Gulf of Mexico, lifted their restrictions too.

So we’re seeing these Southern States where people tend to flock for spring break. It’s still cold up North, feels wonderful down here, except of course today it’s, it’s in the forties out of nowhere. But other than that, like typically weather down here hits the 60s, 70s, sometimes even the 80s, depending how far South you go and people want to get away. People have been locked up in their homes now for a year. A lot of people already throwing caution to the wind. Plenty of them didn’t have any caution to begin with. So they’re ready to get the hell out and Texas is saying, we’re all the way open for business. Come and bring your virus with you. We won’t even make you cover your face. And then Mississippi chimes in and says, hey, don’t forget about us. And then of course you have us over here in Florida where our governor’s like, well, ha, we never even had a mask mandate. So checkmate.

Yeah, this is bad. It’s great that Joe Biden says we’re going to have 300 million doses of the vaccine by the end of May, you know, for every adult in this County, because we’re going to need it. But based on the actions that are happening right now, across the South as usual, um, for many people that’s going to be too late, it’s going to be too late. These decisions by these Republican governors led by Texas are going to get people killed. There is no question about that. The only problem is that these Republican governors don’t care and the question remains, will the voters hold them accountable when they’re up for reelection? It’s up to us to remind people of these horrible actions that these governors took because if we fail in that job, these people will, I promise you, forget about it and move on. So we have to remind them that these governors literally didn’t care if they lived or died on multiple different occasions, just in the span of two months.