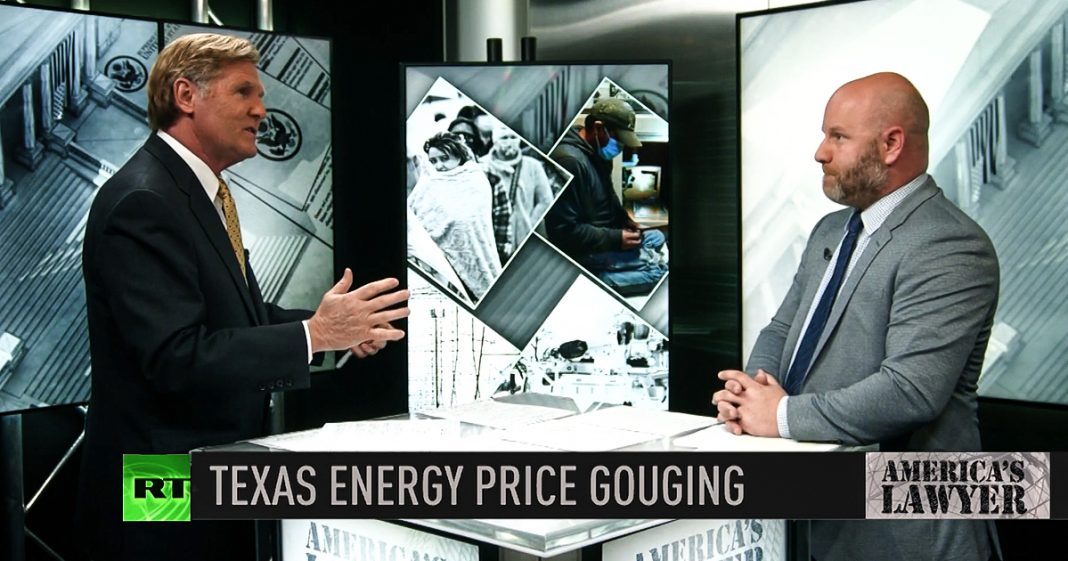 Mike Papantonio:             Texans were hit with a massive winter storm last week that knocked out the power grid and now they’re facing thousands of dollars in new power bills. Joining me to talk about this is Farron Cousins, you know, Farron, the corporations are always going to see an opportunity to take advantage of disaster, to take advantage of people suffering. And that’s what’s happening in Texas in this unregulated energy delivery system where the power grid doesn’t even work. What’s your take on this story?

Farron Cousins:                  You know, at first, when I saw these headlines and people posting the bills, I thought, okay, well obviously the company made a mistake and accidentally billed this man $17,000. But no, this is the, the energy companies intentionally did this. They price gouged consumers because obviously the demand for electricity skyrocketed and the supply was low. So they justified this and now these energy companies that are charging people $16,000, $8,000, $5,000, whatever it is, they’re saying pay up or we’re cutting your power. So this is not a mistake and this is not something the power companies are willing to forgive. They’re saying, give us $10,000 for one month of electricity or you’re off the grid.

Mike Papantonio:             Well, in a, in a capital, a real capitalism free for all in an unregulated setting, you always see these hyenas. I mean these bottom feeders, corporate, bottom feeders coming out to squeeze every dime they can out of this, most of the time, it’s the suffering consumer. That’s certainly the situation in this one. Man was charged $17,000 as you point out in these, some of these, these, these costs. But if you go back to the beginning of it, it’s Abbott, okay. Abbott, governor Abbott said, well, we want to un, no regulation here where it comes to, to power source delivery. You can choose whatever company you want and that’s great until there’s a wholesale power problem like we have here. Right?

Farron Cousins:                  Right. Absolutely. And, you know, that’s, Texans are very unique in that and they can actually choose, well, I’ll get my electricity from company A instead of company B, but also they have these agreements, I guess, where they do pay what they call wholesale prices. And typically, it’s, it’s a pretty good rate. Unless of course there’s a disaster, like a snow storm, or even a hurricane, which Texas is no stranger to, then you pay out the wazoo because the companies say, well, the wholesale rate now is suddenly, you know, $500 per kilowatt hour or whatever they want to say it is because there’s no regulation saying they can’t say what it is. Just make it up out of thin air.

Mike Papantonio:             Ugly, ugly part of this story is state leadership, legislators, the people in regulatory, it looks like a scene out of Beavis and Butthead. It looks like these Beavis and Butthead quality leaders are in charge. They don’t know what to do. They’re saying, oh my God, maybe we got it wrong on the deregulation. Maybe there should be some oversight by the government, because if a man’s paying $17,000 for one week, understand it’s really a loss of one week. I don’t care how much he saves the rest of the year, it’s a really bad deal. So maybe they need to take another look at this. I doubt they will because corporations control, in Texas corporations control everything from regulatory, all the way to the Supreme Court of the state. The worst Supreme Court in the United States is right there in Texas.

Mike Papantonio:             New York governor Andrew Cuomo is trying to bully politicians into submissions about his nursing home scandal. I mean, 10,000 people conservatively died from his incompetence. You know what really chaps me, is the Democrats who don’t have the good sense to say, okay, yeah, I’m a Democrat. Governor Como is a Democrat and I got to stand behind him. I mean, really? Have we gotten that tribal? This guy is a thug. He, you know, he is an absolute thug. He bullies, he bullies this legislator who comes out and simply tells the truth about how this guy lied for so long. Pick it up from there.

Farron Cousins:                  Right. This is such a disgusting story. You know, obviously we, we’ve talked about the nursing home thing, but now Cuomo is in survival mode fighting for his political life. So what is he doing? He’s not going out there and having any kind of contrition saying, look, I’m sorry I did this. Uh, no, he is lashing out at the people who called him out for this who are saying that he should resign and what’s even more is we’re starting to get more and more stories coming in. I see them all the time from people that have worked for Cuomo on social media saying, yes, he is a bully. I have, one of them said, just yesterday morning, I have PTSD whenever my phone rings and it says no caller ID, because that’s what she says Cuomo used to do. So they wouldn’t know it was him calling and he could scream at them because they didn’t do what he wanted.

Mike Papantonio:             He is an absolute thug. Now let me tell you, it’s what really gets me, last time we did this story. You remember the comments? The comments were, oh, gee, you guys are talking about Como. You haven’t said, said anything about what really happened. Let me make it clear. Let me talk slow. Let me slow down for the people that really don’t get what a thug this guy is. What he did was he caused people to die. Here’s how he did it. He would say, if you check out of a nursing home and go to a hospital and you die in the hospital, we’re not going to count that as nursing home related. If you go home and you have COVID and you die at home, we’re not going to count that as nursing home related. Here’s the problem. The feds wanted to come in and help him. Okay. You had the health department in New York that wanted to help him, but he didn’t want to look bad, so he lied. So those folks that don’t get it, did I talk slow enough just then?

Farron Cousins:                  Oh, and he would also take other nursing homes, take those residents, put them in with another nursing home, overcrowd them to free up nursing home spaces for hospitals to use for COVID patients. So he helped spread it among the nursing homes. Then covered it up because that was the, that was the big reason he had to cover it up so people couldn’t know how badly he screwed up. And this was a guy who, again, 10 months ago, people were saying, well, he could be the next president. No, this guy should go the same way Donald Trump did because he’s the same person, just with a different hair color.

Mike Papantonio:             CNN darling. All of the, you know, all of the comments, oh, this guy is brilliant. He’s the future of the country. Did you ever hear MSNBC do anything to really investigate what was going on? No. You know why? It’s, what we talked about last time, MSNBC was trying to create a hero with a zero.

Mike Papantonio:             And that’s what happens every time you try to do that. This hero worship thing, it’s got to be over with for Democrats and Republicans alike.