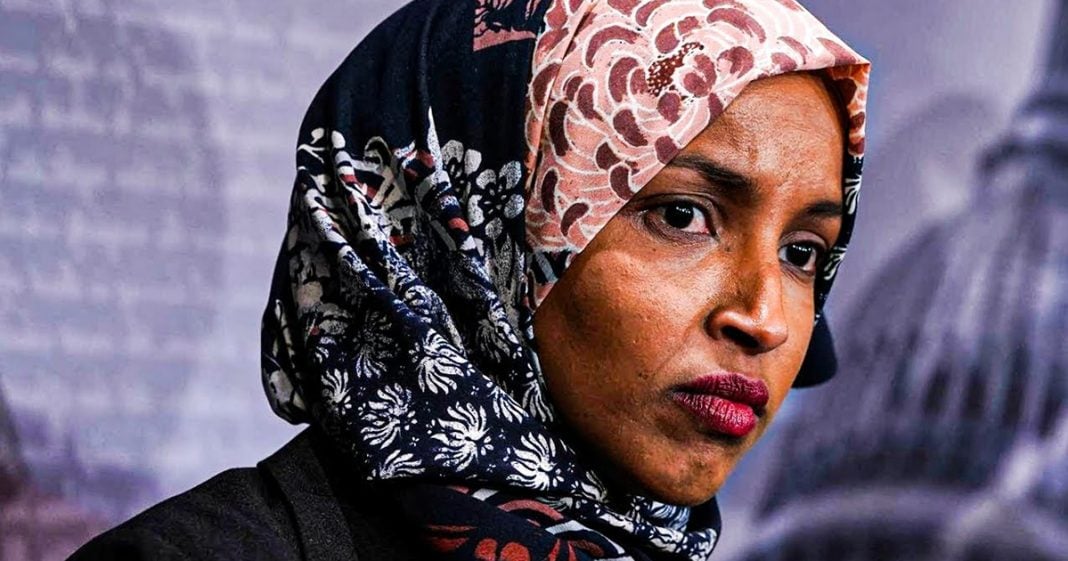 Representative Ilhan Omar is stepping up and filling the leadership void created by Joe Biden’s refusal to take action against Saudi Arabia, and she has now introduced legislation that would sanction the Saudi Crown Prince. His role in the murder of Jamal Khashoggi has been made public, but Biden has refused to do anything about it because he doesn’t want to upset this country that for some reason we still consider to be an ally. Ring of Fire’s Farron Cousins explains what’s happening.

Representative Ilhan Omar introduced legislation yesterday that would play sanctions on Saudi crown Prince Mohammed bin Salman, after it was revealed in a US intelligence report last week that he approved the murder of United States citizen and journalist Jamal Khashoggi. Now, with Khashoggi’s murder, we know that he went into the consulate. He was ambushed when he got in there, and this is all according to the report, they tortured him. They dismembered his body and then they took his clothing, put it on another one of their own, had him walk around the outside of the building so security cameras would make it look like Khashoggi had actually left the consulate. And we now know that Mohammed bin Salman, Crown Prince of Saudi Arabia, approved this because he was unhappy with what a US citizen had been writing about him in the Washington Post.

And in spite of this US citizen being murdered by a foreign government, last week Joe Biden said, I’m not doing anything about it. I don’t want to ruffle any feathers. I don’t want to upset our allies in Saudi Arabia. And this week Ilhan Omar says BS, a US citizen was killed. Saudi Arabia for decades has been guilty of some of the most egregious human rights abuses on this planet. Accountability starts now and if we’re not going to get it from Joe Biden then by God, Ilhan Omar says she’s going to do it herself with her legislation. This legislation place sanctions on MBS. Freezes his accounts with the United States, no more spending to and from the countries. And of course it blocks his entry into the United States, which both of those things are desperately needed. Like that has to happen at a bare minimum. Consider this fact, Joe Biden also announced last week that he was placing some sanctions on Russia because he was unhappy with the way their government attacked Navalny.

I forget his first name and Navalny lived, by the way, he didn’t die. The Russian government did not succeed in killing him. But Biden says, hey, look, that government tried to kill somebody. We’re gonna, we’re going to sanction them because they suck now and then like the next day, they’re like, hey, um, Saudi Arabia actually did the same thing and this, this guy was actually one of ours. He was a US citizen. So what do you, what do you want to do? We do the same kind of sanctions we’re doing with Russia? And Biden’s like, nah, Saudi Arabia has got stuff we want, they have money, they have oil. Russia, yeah, they got some oil, but you know, we’re not really the trade partners for that. in terms of money, eh, no. So that’s why that is 100% why this is happening because you had two very similar scenarios.

You know, there’s very little difference between what we have seen the Russian government do when they get angry with an individual and by God, we’ve seen it a lot. Like, oh no, he suddenly fell off a 30 story balcony. Who could have guessed that? And then Saudi Arabia over here doing, I mean, even more grotesque things, but one country gets sanctioned and one gets welcomed with open arms into the White House. Why? Because Saudi Arabia has things that we want. They have money that they use to buy our weapons and they have all of that sweet, sweet, precious oil that we just, God, can’t get enough of. Need another hit every now and then don’t we? Ilhan Omar is right, Saudi Arabia for Khashoggi and so many other things, they are not our friends. They are not our allies. They are not good guys.

They’re just as evil as some of these other regimes that we’re told we have to hate except Saudi Arabia is the real deal. Saudi Arabia really is the big, bad enemy that we’ve been trained to think some of these other countries are. They are the ones who intelligence reports say they buy our weapons from us and sell them to Al-Qaeda and Al-Qaeda uses them to kill us. They fund terrorism in areas across the globe, according to lawsuits. They’re not our friends. I mean, by their actions alone, they have proven that they are our enemies. So let’s stop inviting them. Let’s stop listening to them and let’s stop enabling them and the slaughter that they are helping to carry out, not just in their own country, but all over the Middle East.