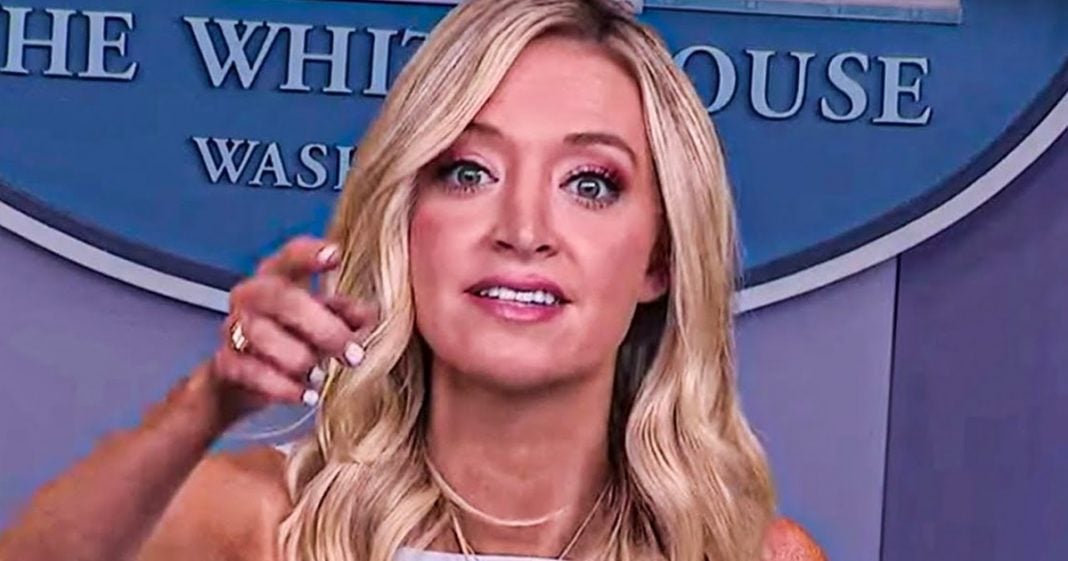 Fox News officially announced on Tuesday that they had hired former Trump Press Secretary Kayleigh McEnany, and staffers at the network are absolutely furious about this decision. Several staffers spoke to The Daily Beast and told them that there’s absolutely no objectivity at the network anymore, and that the viewers who continue watching the garbage they put out are morons. Ring of Fire’s Farron Cousins explains what’s happening.

Yesterday Fox news announced that they have officially hired Kayleigh McEnany, Donald Trump’s former press secretary, as a full-time contributor to the network. And shortly after this information was released to the public on Tuesday morning, it was later revealed that Fox news staffers are furious with the network’s decision to bring on the truth immune Kayleigh McEnany, and you know, before I get into it, it is good to know that there are still some people that work at Fox news, you know, albeit the staffers behind the scenes, not the on air people who actually do have morals and standards and do believe deep down that they can change the culture at this network that they can make it better than it’s ever been by actually making it truthful. God bless them for it, but, they keep getting proven wrong and I think that’s why they’re getting so off now.

Again, the Daily Beast spoke to several insiders at Fox news, got their opinions on things, and here’s what they had to say. It’s truly disgusting. They fired hardworking journalists who did care about facts and news reporting only to turn around and hire a mini gerbils whose incessant lies from the White House helped incite an insurrection on our democracy that got five people killed, including a police officer. Um, wow. That’s, that’s pretty strong, strong words. Another one says, post-Trump Fox is quickly becoming a very scary place and quite dangerous for our democracy. It’s not even conservative news anymore. They’ve plunged into an alternate reality where extremist propaganda is the only course on the menu. Now that’s a great point and that’s what I want to hit on. I’ll get back to that in just a moment here. So many good people are out of a job now, and I’m sure she’ll get a huge contract.

it bothers me in that it basically is a slap in the face of the hardworking journalists that value real news and facts. This is the best one. Uh, it’s a self-serving profiteering enterprise. She was hired because of name recognition, notoriety and obvious willingness to say anything her employer desires, the viewers are morons. That’s why I liked that one the most, because it also takes that shot as like, yeah, we know the network’s horrible. We know we do these bad things, but by the way, the people that watch this network you’re idiots, you’re morons. So back to the point, you know, Fox news as, as this staffer says, is, is going more into the conspiracy route. They, they did fire journalists, including the one who called Arizona for Biden in the election, which was truthful, but it hurt Trump’s feelings. So they fired that journalist and they’re going more into the conspiracy realm.

And the reason for that, the reason they’re going to these extremes now is because they actually have to compete in the same marketplace as networks like Newsmax and One American News and in order to do that, you have to out crazy them. You know, this is something we have actually talked about here at Ring of Fire since the beginning. Since 2004, we’ve talked about the fact, and I’ve brought this up recently, too, there’s not enough room in the marketplace for all of these conservative viewpoints, I guess you would call them, conservative outlets, I think is a better word. So what happens and we saw this by the way, back in the day with Ann Coulter, Michelle Malkin and Laura Ingraham, the three of them continuously had to out crazy the other one to get their name in the headlight, to get the spotlight for a few minutes until another one of them would say something ridiculously crazy and stupid, then the spotlight would go.

And that’s kind of what Fox news is having to do now with Newsmax and One America. Oh, they’re hiring former Trump staffers. Well, we’re going to hire former Trump staffers. Oh, they said this crazy thing that almost got them sued for $1.3 billion. We’re going to say the crazy thing that’s going to get us sued for defamation. Like Fox news is in the position now where they’re kind of playing from behind. You know, I thought for certain many months ago, that Fox would emerge victorious in this war between these three little conservative networks. But it turns out Fox is actually losing. They’re losing viewers. They’re not getting as many advertisers and those other networks are continuing to grow. So Fox has to combat it and you combat that by bringing in somebody like Kayleigh McEnany, you know, pretty face, empty head. That’s what fits in at Fox news.

And so they found the perfect hire with Kayleigh McEnany. As the staffers pointed out, she will say whatever they want her to say, it will have a hardcore conservative bent and hopefully the network thinks that’s enough to bring in some of their viewers who are going to those more extreme networks. We’ll see as this story unfolds, but either way staffers aren’t happy and when the people behind the scenes aren’t happy, tends to make the quality of the product go down. So Fox is going to have to eventually deal with that issue as time moves on too.