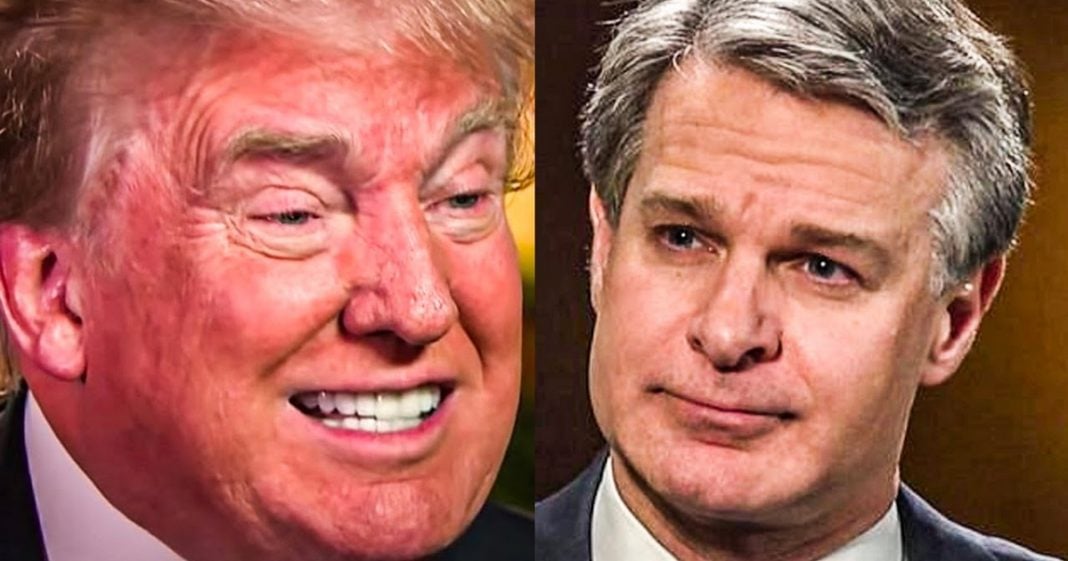 FBI Director Christopher Wray confirmed this week that there is absolutely no evidence that Antifa perpetrated the attack on the Capitol on January 6th, nor is there any evidence yet that any of the rioters were Antifa. In short, the FBI director made it clear that these crazed Trump supporters, not left wing agitators. This isn’t a shock, as these idiots boasted on their social media pages about what they did, making it easy to identify them. Ring of Fire’s Farron Cousins explains what’s happening.

Yesterday, FBI director Christopher Wray was essentially kind of forced to come out and admit that the FBI has not found a single piece of evidence to suggest that anyone from the January 6th insurrection was in fact Antifa, which when you say it another way just confirms that, yeah, all the people who helped storm the Capitol on January 6th were in fact, crazed Trump supporters. Chris Wray said the following in his statement, he said, we have not to date seen any evidence of anarchist, violent extremist where people subscribed to Antifa in connection with the 6th. That doesn’t mean we’re not looking and we’ll continue to look. But at the moment we have not seen that. So I think it’s funny that he’s like, look folks, we’re really trying to find it. Okay. We would love to find this Antifa smoking gun, but so far, none of their subscribers as he calls them, which is just hilarious, like, hey, do you subscribe to Antifa? You should dude, it’s totally cool. Um, no, so, so anyway.

None of their subscribers have been found there and there are still right-wingers out there, and in fact, we did a story on it earlier this week and sure enough, it brought out some of the craziest of the crazies on Twitter saying nu-uh, I have proof. I have documents showing that an Antifa guy said he was going to dress up as a Trump supporter and here’s the check he got. Like, y’all are nuts. Seriously, go check yourself in, get yourself analyzed, find out what kind of demons you have kicking around out here so you can stop being plagued by these kinds of thoughts, because it simply didn’t happen. And we know that not just because of what Christopher Wray said, I put very little stock into what he has to say, what I do believe, however, are the people who have been able to go through social media after identifying the people at the riot and seeing that, yes, these are hardcore conservative people and they always have been. Right? These are not fresh converts. These are not people who had been posting, you know, Antifa stuff up until December and then suddenly it’s oh, Trump, Trump, Trump to try to throw people off. No, they have this pattern. We see it.

We go through their pictures, we go through their profiles, we go through everything that they have to offer and it confirms that these are not some kind of Antifa sleeper agents. They are in fact hardcore yet crazed Trump supporters and now the FBI has confirmed that. But hey, don’t worry, folks. As Wray said himself, he is absolutely going to keep looking to try to find anyone in that crowd who may be an Antifa subscriber. So of course at that point, that would give the Republicans clearance to say, aha, even if it’s just one, one dude, if you find the one dude, suddenly they’re going to frame it as both sides. What happened on January 6th was not a both sides issue. That was a Trump supporter issue. It was a Republican issue and it’s an issue that they need to stop avoiding and accept the fact that their side has some serious health problems, mental health problems, that need to be addressed because the longer we ignore them, the more dangerous these individuals could become. Locking them away. Cool, great. That doesn’t solve the fact that these people do have serious issues that need to be worked out with professionals so that they can be rehabilitated. Otherwise you’re just caging a monster that’s going to come out even more angry.