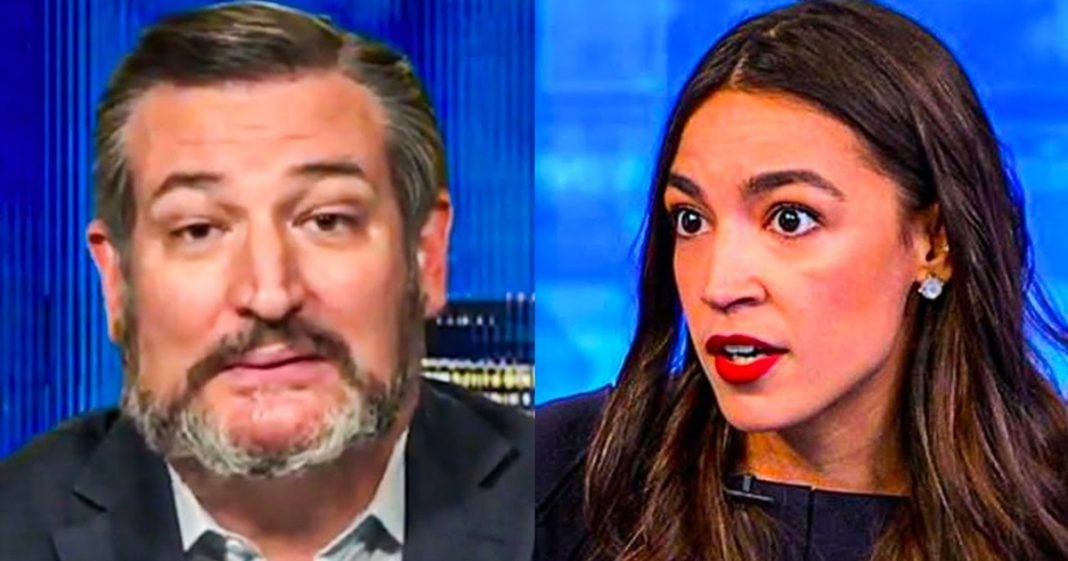 Ted Cruz took a cheap shot at Representative Alexandria Ocasio-Cortez during his speech at CPAC, and the young Representative fired back at Cruz on social media accusing him of using Texas as just a “layover” between his trips to Cancun and CPAC. AOC is absolutely right, and Cruz should show a little bit more reverence for the woman who did more for his state in a time of crisis than he has in his entire political career. Ring of Fire’s Farron Cousins explains what’s happening.

During the CPAC convention over this past weekend, Republican Senator Ted Cruz took a couple of cheap shots at democratic representative, Alexandria Ocasio-Cortez. One of them, when he mocked her saying, and AOC is telling us she was murdered during the Capitol insurrection that Ted Cruz has been accused of, uh, helping to incite and of course has not been held accountable for any of that. So he decides to mock this young woman, because she was frightened when all of this was going on, because as we know, she has received countless death threats over the years, to the point where her staff has had to have special training to know how to deal with any crazed individual that might approach them. So, yes, I would say that her fears are based in reality, Ted. But either way, Ted Cruz takes this cheap shot at this woman. So she fires back on Twitter on Sunday saying this.

She says, I don’t care what Cruz said at CPAC, but I do care that it appears Texas was just a layover stop for him between Cancun and Orlando to drop a pack of water into someone’s trunk and abandoned his constituents again, as they get slammed with $16,000 electrical bills. You know, Ted, you really got to stop fighting with AOC. Uh, you’ve never won one of these fights, by the way. She is smarter. She is quicker. She is better than you could ever hope to be and as usual, she’s 100% correct about this, dude. You abandoned your state when they needed you most. You were nowhere to be found because you went to a different country, seeking a better life for your family, sound familiar. And then you came back and as she said, you threw a couple of bottles of water in the back of people’s trunks and then you skidded off down to Orlando to go trash the woman who went to your state, and actually raised more than $5 million for your state, while you did nothing. You did nothing. This woman helped needy residents of Texas, which you could have done. You should have done, but you didn’t do.

And you thought it was a better idea to go to a different state, to what is likely going to be a super spreader event and mock her. She was one of the few people that went to Texas and helped. Like material, quantifiable help AOC gave to the people of Texas and Ted Cruz has nothing better to do, but to trash her for a couple of political points, Texas, you deserve better. You deserve better than this scumbag, which is exactly what Ted Cruz is. He made that comment because he knows that’s one that resonates well with the craziest of the crazies in the Republican party, which is what goes to CPAC and he said it to gain political points. Meanwhile, this young woman busted her to help his state because he fled the country and if you don’t see who is right and who is wrong in this situation, then there is no help for you at all. Ted Cruz is a scumbag. AOC is the hero in this story, and that’s just the way it is.