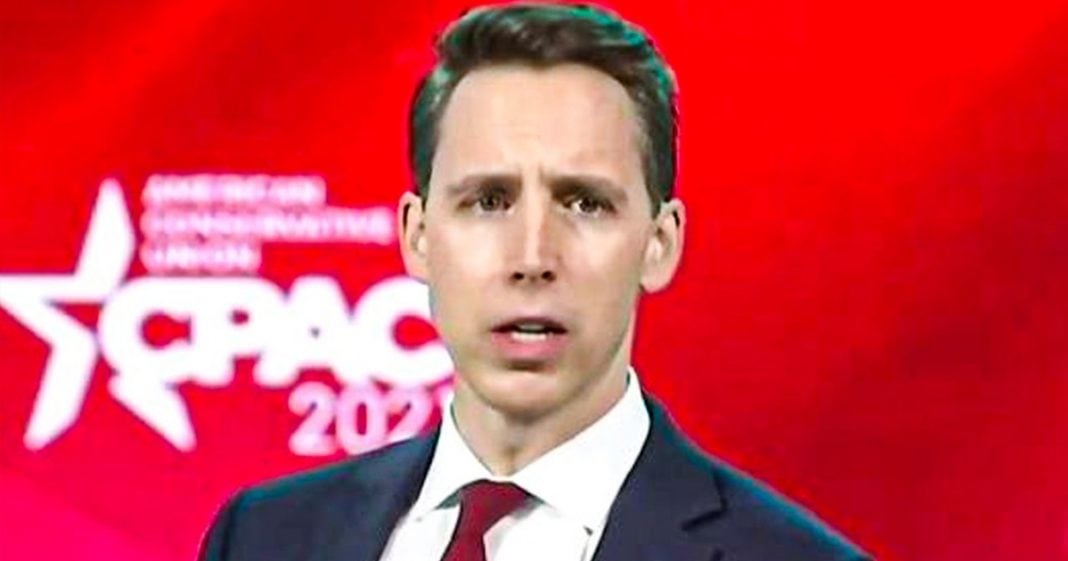 Republican Senator Josh Hawley said late last week that there is no systemic racism in the United States because we are country that “liberated slaves.” The man has absolutely no understanding of U.S. history, either that or he thinks that the rest of the country is lacking that knowledge. This is the man that some Republicans believe will be the face of the Party for years to come, and this is the best that they have to offer. Ring of Fire’s Farron Cousins discusses this.

Republican Senator Josh Hawley desperately wants to be the new face of the Republican party and by God, he is willing to say and do anything to make that a reality. On January 6th, shortly before the insurrection, obviously we’ve all seen the photograph of him walking by the crowd, giving them the fist of solidarity and then of course, those individuals stormed the Capitol and Josh Hawley has not yet been held accountable for his actions in solidarity. But this past weekend at CPAC, Josh Hawley showed the country just how stupid he truly is when he said the following. We heard that we are systemically racist, talking about America. You heard that once or twice, we heard that the real founding of the country wasn’t in 1706, it was in 1719, or whatever. We heard that America’s founded in lies and evil. That’s what we’ve been told.

All of that is false. All of that is a lie. Part of standing up to the oligarchs in tech and in the media and in the liberals is reclaiming our history and saying it is good and we are proud to be Americans. We’re proud to have lived in a country that started with nothing and became the greatest country in the face of the earth. We’re proud to be in a country that liberated slaves. Wow, I think you kind of skipped over some parts there, bud, because we didn’t just found the country and say, hey, slaves are all liberated. No, no, no dumb dumb. We went through decades and decades of fights, of legislation, a very bloody civil war before we even got to that point. Then it was another hundred years after that, that we finally erased most of the last bit of laws that segregated these individuals, the black individuals from the white individuals. That’s, that, that that’s not a liberal conspiracy.

That’s not the media making that up, Josh. These are things that are in history books. These are things that are verifiable. Hell, these are things that some people alive today actually lived through and they would be more than happy to tell you about it, Josh. Here’s the thing. We know, oh, he also, by the way, called for a new nationalism, if that’s not terrifying enough for you. Josh Hawley, like most other Republicans in his position, is choosing to be ignorant about the facts. I do not believe for a second that Josh Hawley is a stupid person, but in order to succeed in today’s Republican party, you have to come off as stupid, right? You have to look at reality and say, this isn’t what it is. No, this is, this is fake. What I’m telling you, the things I’m literally making up off the top of my head, those are the things that are real.

That’s how you succeed in today’s Republican party and that is exactly what Hawley was doing here. He is making things up. He is erasing and quite literally white washing American history because it didn’t fit into the narrative that he was trying to sell that idiotic crowd down at CPAC. So much like Ted Cruz, who also is not an ignorant individual. I mean the Cancun trip, yes, that was very stupid. But other than that, Ted Cruz is actually very good at politics and I think Josh Hawley is too. And that’s why Hawley is going to be around forever. This is the Republican party’s new golden boy. This is the one that they’re putting up there, putting out there, allowing to go out there to be the face of the Republican party at a time when the Republican party is looking for a new face. Right?

It can’t necessarily be Donald Trump. He’s down there hiding at Mar-a-Lago. Ted Cruz is universally hated, but Hawley, Hawley’s fresh enough and even with the blight of his fist of solidarity is supporting the insurrectionists. He can, he can outlast that stigma. And I know it sounds weird to say that, but folks, trust me, if Hawley doesn’t run in 2024, he’ll still be around again to run in 2028. At that point, what happened on January 6th, 2021, he’s going to dismiss it as ancient history and American voters gonna be like, yeah, I guess he’s right. That’s it. That’s all it’s going to take. Hawley is not going anywhere and he is going to continue peddling his unique brand of stupidity because as we all know, that plays pretty well to the Republican crowds.