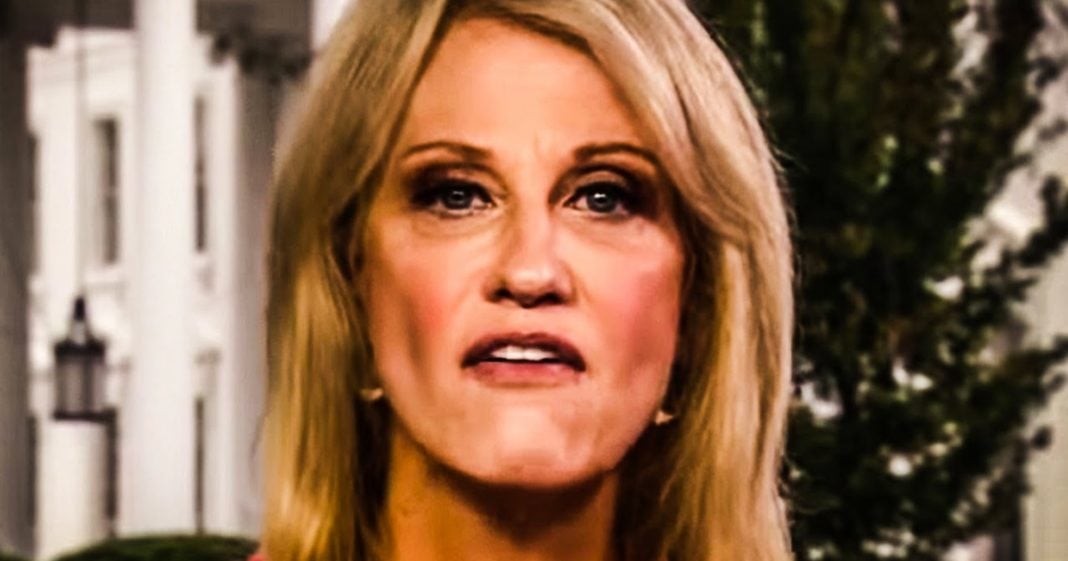 According to a new report from Vanity Fair, Kellyanne Conway managed to survive the Trump White House by routinely leaking things to the press. That’s the least surprising part of the new report, as it also claims that Conway KNEW Trump was off his rocker, yet she still did everything in her power to defend him in the press. Ring of Fire’s Farron Cousins explains how this report perfectly explains what happened behind the scenes at Trump’s White House.

According to a new report from Vanity Fair, Kellyanne Conway apparently knew from the beginning that she was working for, well, to put it mildly, a crazy person. But she managed to survive ,according to the report, by continuously leaking to the press. And this report, by the way, is based on conversations with actual White House insiders, who were there at the same time as Conway. Here it is, Kellyanne was determined to come out on top. Her superpower, according to associates, was leaking to the press. While she made a show inside the White House of needing to stop the leaks and publicly bemoaned the palace intrigue stories, she herself was a front, they say. According to associates, she needed to remain Trump’s biggest champion while privately insisting to those in the real world, the world from which she came, that she was a fellow sane person who understood that Trump was a mess.

She also, it goes on in rather, uh, let’s say colorful language, to admit that Donald Trump was in fact, a misogynist, a claim that many in the White House tried to dismiss all the four years he was in office. Now let’s be clear about something here, her being the leaker, that’s something every one of us suspected the entire time. We had actually done videos saying it’s pretty obvious that Kellyanne Conway’s the leaker. There was that, I think it was Washington Post piece a few years back where she tried to be like, hey, off the record, you should say this thing. And they’re like, but we’re already on the record so we can’t say that somebody else said what you’re trying to have us say and they printed it. So it became obvious at that point, yes, Conway was the leaker. What’s more interesting is that she knew she was working for somebody who she herself basically describes as not sane.

And yet she still continued to be one of his biggest defenders, loving every second of every single interview she ever gave, knowingly lying to the public about what was actually happening inside this White House. Now Kellyanne has, you know, basically disappeared since she left the White House late last year. So we haven’t heard a whole heck of a lot from her. But it wouldn’t surprise me one bit if she wasn’t kind of pulling the strings on stories like this, right? Because this is exactly the kind of thing you would want printed if you were trying to give yourself a public image makeover to make some kind of return to American politics. I think that’s what we’re seeing playing out here. Maybe she had these individuals, you know, these associates go talk to Vanity Fair and say, hey, she knew he was crazy. She wasn’t like him at all.

She was actually a good one and she just went along with it because, you know, she worked for him. We can’t let this work. Right. We can not allow Kellyanne Conway to con her way back into American politics. It’s been a nicer place since she left and that says a lot about this hellscape that we call American politics. She was absolutely horrible. She got paid to lie to the public and apparently behind the scenes, she was lying to everybody else about who in fact was leaking these stories. She is just straight up a horrible human being. We’re seeing more and more of that even with her being gone. But again, we can’t allow these little, you know, oh, well she knew all along he wasn’t good. Who cares? You went along with it and you’re going to hang that over your head for the rest of your days.