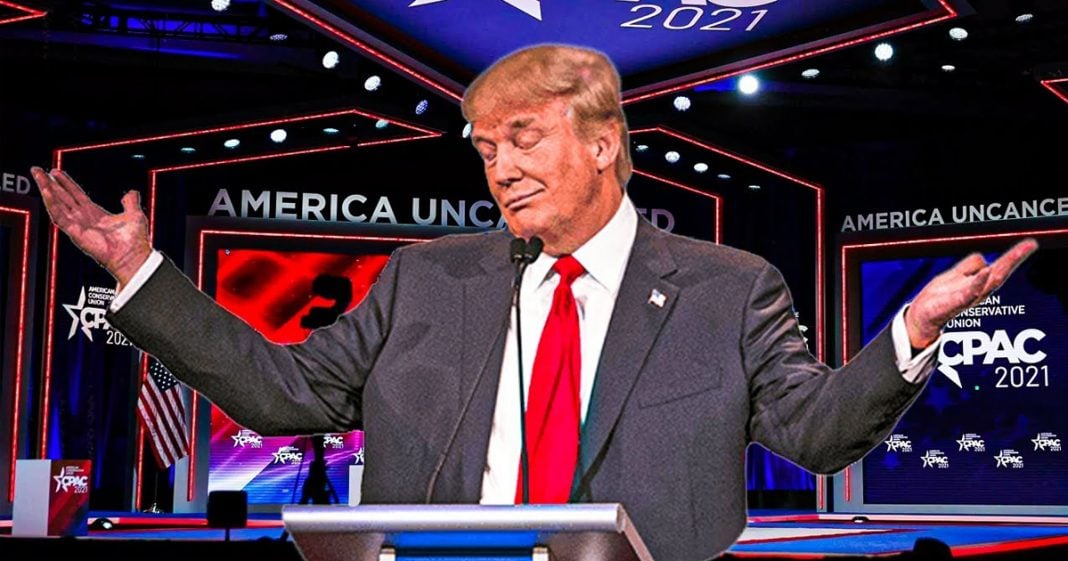 Social media lit up over the CPAC weekend after it was revealed that the stage was in the shape of a symbol commonly used by Nazis during the Second World War. CPAC organizer Matt Schlapp quickly took to Twitter to not only say that the symbol was not intentional, and also that those who point it out are engaging in “slanderous” behavior. The proof is on the stage though, and everyone saw it. Ring of Fire’s Farron Cousins discusses this.

Well folks, CPAC has now come to a close, thank God. But the big standout star of the weekend was not actually Donald Trump. It was in fact, the stage itself. As many people on social media were quick to point out once the conference began, the stage was shaped like an odal rune, which is a symbol that was frequently used by Nazis during the second world war. People all over social media posted pictures of Nazi soldiers that had the little emblem on their lapels. Like this was clearly something the Nazis used and apparently CPAC was like, hey, this is our design for our stage. Now Matt Schlapp, who was very vocal during the Trump administration, huge supporter of Trump and head of the American conservative union that puts on CPAC, was furious when everybody started pointing out the fact that, yeah, you’re standing on a Nazi symbol.

So he came out and he tweeted this. He said, stage design conspiracies are outrageous and slanderous. We have a longstanding commitment to the Jewish community. Cancel culture extremists must address anti-Semitism within their own ranks. CPAC proudly stands with our Jewish allies, including those speaking from the stage. Yeah, you stand with your Jewish allies on top of a Nazi symbol, you idiot. This isn’t a conspiracy. This is something that actually happened. Okay. We’re not making it up. The, the, the symbol was there. And to say that it’s slanderous, dude, you need a dictionary pronto. That is not slanderous to point out something and say, hey, that’s the same as this and then provide photographic evidence side-by-side showing people, eh, they did it. Now you can argue back and forth all day long about whether or not this was intended and unfortunately, I don’t think that’s something we’re ever going to be able to prove or disprove.

Obviously, reports over the years have suggested that these neo-Nazis have wanted to take on a more mainstream role in America. And according to reports, they’ve done this by going to the Republican party. So it is entirely possible that this was not an accident. It also is entirely possible, considering we’re dealing with a party of idiots, that it was completely accidental, that they didn’t mean to do this at all. They just said, hey, here’s a cool shape. What if we, do this and like two little wings coming off the top. Yeah. Like that wouldn’t surprise me either because these people don’t take five seconds to look online because really it took people a matter of minutes after seeing this shape to say, wait a minute, I know that from history, I’ve seen this before and you’re not going to like where I’ve seen it. So Matt Schlapp can get on Twitter. He can rant and rave all he wants, accuse people of slander. The truth is there, right? You did use the imagery, whether or not it was intentional, I guess that’s going to be a mystery forever.