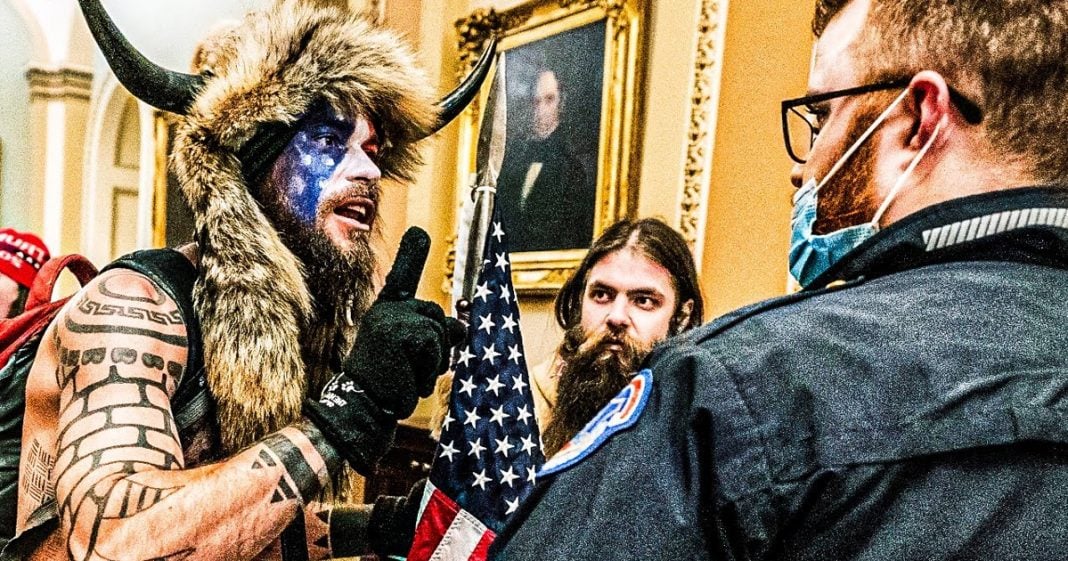 Republicans are still trying to say that Antifa was responsible for the January 6th insurrection, but their talking points continue to be ruined by the people who stormed the Capitol. With more and more evidence emerging from the event – including imagery actually being shared by the insurrectionists themselves – it is becoming increasingly foolish for Republicans to blame anyone other than their followers for what happened. Ring of Fire’s Farron Cousins discusses this.

Apparently, there’s still a lot of Republicans out there who are trying to blame the January 6th insurrection on Antifa. They are still out there saying that this was an Antifa false flag operation meant to confuse people and to obviously make the Trump supporters look like crazy lunatics. In fact, CNN this past weekend actually ran a segment on this, a very long segment on Saturday evening, talking about the fact that this conspiracy, that it was somehow Antifa and not the Trump supporters, is still prevalent. But they also pointed out that this entire conspiracy is and always has been thwarted by the posts, the social media posts from the actual insurrectionists themselves. As we have already discussed at length and CNN, I guess finally decided to cover it at the end of February, these individuals who stormed the Capitol were posting it on social media, live streaming videos to their Facebook page, tweeting out pictures of themselves. And of course, being caught on the security footage and the footage of other individuals at the event.

Like we know who most of these people were and so far there’s no Antifa. There is no Antifa. There was no Antifa, at least not that anybody can prove. What we have been able to prove though, is that these individuals have a long history on their, again, their social media pages of supporting Donald Trump and other right wing causes for years and years and years and years. So in order for this conspiracy to actually work, you would have had to have had Antifa years ago, like long before Antifa was even a thing, they would have had to at that point, come up with this little plan to storm the Capitol on January 6th, a day, that most of them I’m sure didn’t even know held any significance whatsoever for electoral politics. Most people didn’t until this year. So they would have had to plan it all the way back then. Started posting pro-Trump stuff all over their Facebook and Twitter pages. Continued the charade for four years, maybe five years, depending on if they started during the primaries. So five years posting all of this and planning all of this and then showing up in their best pro Trump regalia to storm the Capitol on January 6th.

That is a hell of a leap, but apparently it’s a leap that far too many Republicans in this country are still willing to push. But the proof is in the pudding, folks. We have the social media posts from these individuals. We know that they are not Antifa plants who have been basically sleeper agents for the last five years. That’s not a thing. Antifa didn’t do this, Republican Trump supporters did. And of course, Republicans don’t ever want to own the mistake. Hell I’m sure if it was Democrats that had done this, Democrats wouldn’t want to own it either because it was a disgusting display, but the lengths to which Republicans are going to are absolutely comical at this point. They’re literally telling people, hey, deny or ignore the reality, deny that this was our people and somehow pin it on this nameless faceless thing called, oh, it’s not nameless, but Antifa. You know this thing, that’s not really an actual organization, even though we like to claim it is. There’s no real leader of it. You can’t pinpoint any one individual who kind of runs it. It’s just a thing. So yeah, keep doing that because I’m sure that’s totally not making you all look like bonafide idiots every time you say it.