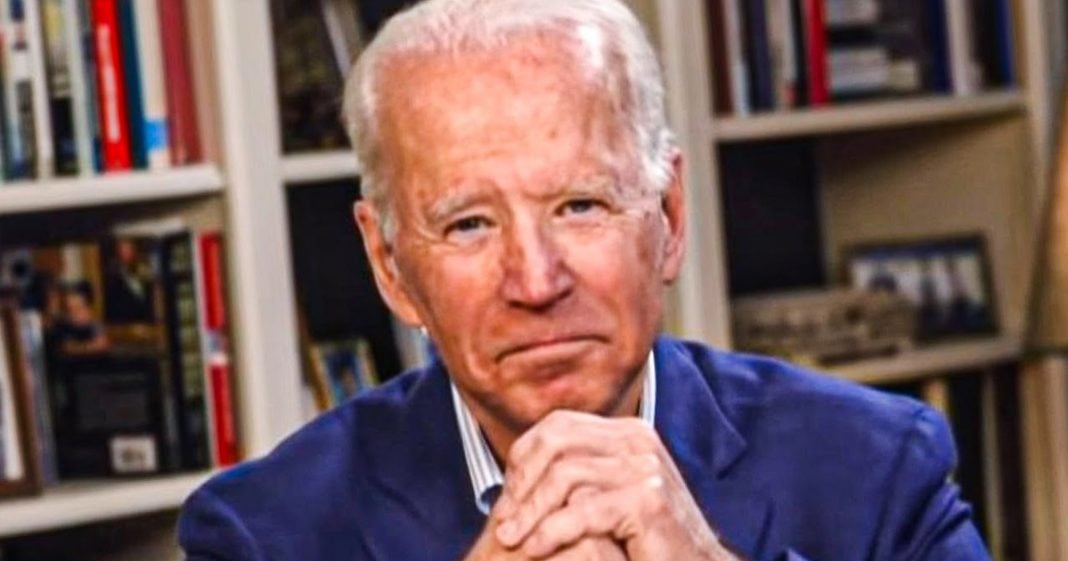 A new poll shows that voters want Joe Biden to go big on cancelling student loan debt up to $50,000. Right now, Biden doesn’t want to go that big, and instead is considering forgiving roughly $10,000 of debt. That’s a good start, but people want more from Biden as the student loan debt crisis continues to weigh down an entire generation. Ring of Fire’s Farron Cousins discusses this.

President Joe Biden is still planning on forgiving, at least some portion of student loan debt here in the United States, which let’s, let’s be clear about it. That’s a good thing. That is definitely a great positive move. The question is, is it enough? We have what, one and a half trillion dollars in student loan debt here in the United State, States held by people of all age groups, 18 and up, even people in their sixties and seventies have student loan debt. And I’m giving these reasons first to kind of prevent any arguments. This debt for many Americans is holding them back. It’s holding them back from being able to purchase a home. It’s holding them back from being able to go out and try to find their dream job, because they immediately got to pay this debt. They can’t afford to not work. So they’re settling, they’re getting these crappy jobs.

They’re not able to contribute to the economy in the ways that we actually need them to, to keep the economy running under our capitalistic system, because they’re so busy paying off these debts. The cost of college is growing astronomically, not keeping pace with the price of inflation. So you have to take out bigger and bigger and bigger loans. They’re taking out these loans, most of them at a time when they don’t really fully understand the implications of it. They’re 18, 19 years old. They’re signing these documents, you know, that are basically saying, you’re going to be paying these off for the next 30 years. When you’re 18, that’s kind of hard to grasp. So all that said and done, yes, there is a student loan crisis and yes, the ripple effects of it are felt throughout the entire United States economy.

So Joe Biden’s gonna forgive some of it. How much? Well, according to a new poll from data for progress, Americans, most of them, 54% say go big. Go big and go 50 grand, 50 grand in loan debt across the board. Let’s not means test it because then you’re getting into crap you shouldn’t be getting into. Just forgive it and move on. 50 grand is what they say, 54% say 50 grand, 37% say, no, don’t go that high. So a 17 point advantage for the people who say go big. We’re not going to get 50 grand. We’re going to get 10 grand, which again is still good, but it’s not great. It’s kind of like the affordable care act, right? It’s good. It’s better than one we had, but it still wasn’t enough to actually fix a crisis and that’s kind of what Joe Biden’s thing is. I understand a lot of people and I’m actually in this boat, you give us 10 grands towards our student loans, you kind of take care of our problem.

But we’re not Really the ones who are suffering the most from it anymore. You know, we have kind of corrected ourselves to the point where we’re able to pay it and it’s not that big of a blow to us each and every month. That’s the boat I am in. The other folks, not so much, you know, if you have 60 or $70,000 in loans for a bachelor’s degree, which is not uncommon anymore, 10 grand is nothing. I’m sorry to say it that way. But 10 grand is nothing. And that’s why people say go big. But honestly, that’s one of the biggest problems the Democrats always have is like, when you have the numbers, when you see the polls and the people say we want it and you have the numbers to make it a reality and the Democrats still come and say, eh, no.

Could have done it with the public option, by the way, in the affordable care act. Because that was all, all a part of the original bill and the public loved it. But they wanted to get some Republicans to help supported and then, oh no, now we’ve lost and now we got nothing except a bunch of healthcare exchanges and still paying too much for health insurance. Yeah, tens of millions of people got health insurance. That’s kick for them. That’s so much better than not having it. That still doesn’t mean they can afford to go to the dang doctor though and this is the same thing, you know. That’s what gets so disappointing is the Democrats always come along and say, all right, I got a great idea, but before, let me go ahead and make it a little worse before I sell it to you. Happens every time.