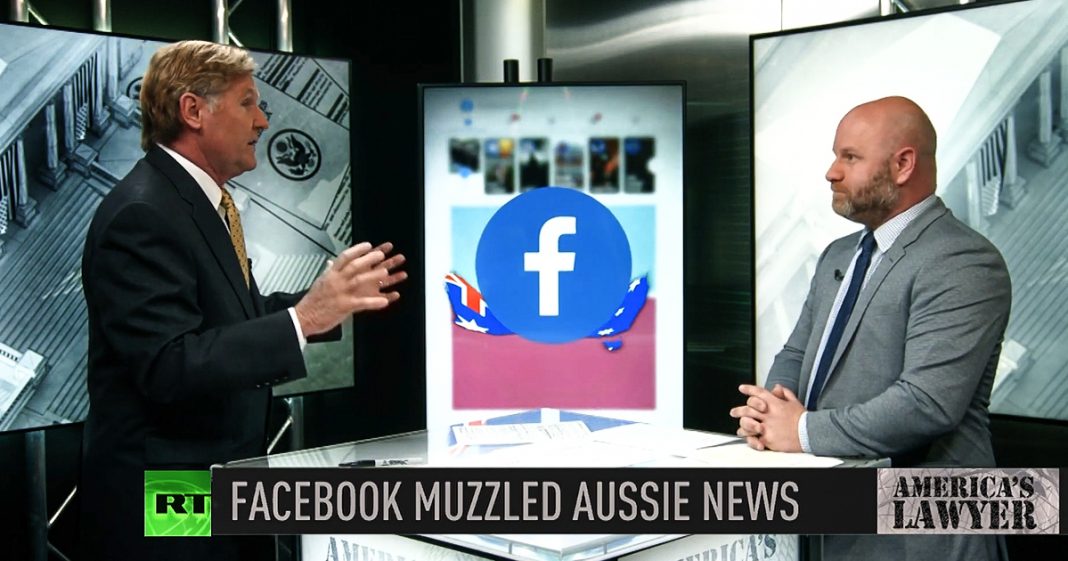 Via America’s Lawyer: Facebook reaches a deal with the Australian government to restore news sharing to the country’s users. The feature was banned after news outlets demanded to be paid for their content. Mike Papantonio & Farron Cousins discuss more.

Mike Papantonio:             Facebook has reached a deal with the Australian government to restore its news sharing feature after cutting off Australians from sharing news on their feeds, when media outlets demanded to be paid. Okay. Real simple here. All right. You’ve got this monstrosity, this tech monstrosity that believes they are bigger, I mean, they think they’re bulletproof, honest to God, think they’re bulletproof. Now they go to Australia and they start saying, we’re going to punish you Australia. We’re going to punish you because, oh my God, news sources want to be paid for their work. Take it from there.

Farron Cousins:                  So Australia tells the, or Facebook tells the Australian government ,we’re blocking all news in your country. Oh and just for good measure, we’re cutting off all your, your firefighters, your, your social services pages on Facebook. We’re just shutting those down because to hell with you, I guess, is their reasoning. So, and they did this again because Australia was working on legislation that would in fact force Facebook to start paying the news companies, who it’s using essentially, to get people to come to Facebook. Come to Facebook because that’s where the news is.

Mike Papantonio:             The the bad news. You predicted this last year. Okay. Here’s the bad news. They worked out a deal. Now that sounds like good news on it’s face, doesn’t it? It sounds like great news, but it’s not. All Facebook is trying to do is consolidate, consolidate all this information and start their own news service. This is going to be corporate media on steroids. Australia had to cave in, I guess, that the other part of it is, it slowed down the regulatory look at Facebook.

Farron Cousins:                  Right. So Facebook it’s a win-win for them because, you know, yeah, they’re not getting the regulations right now, but their new deal, they’re saying, look, we’re going to help these struggling newsrooms in Australia, just like they’re struggling everywhere. We’re going to pay them for their content. But what it does is gives Facebook the clearance to say, listen, we’re paying you. We don’t want you to talk about this. We don’t want you to talk about that. We’re not going to let you publish this story or that story or whatever it is. Facebook at that point becomes a news organization, not just a social media company, and that is exceptionally dangerous.

Mike Papantonio:                  Why is it that, why is it that we don’t see this? Why is it that the person watching this program right now, who’s on Facebook every day, we have a Facebook site, I guess you have to do it. You have to go, you have to make that move. But the truth is you got to understand, go into it with your eyes wide open. Facebook starts out and they say, we’re now going to censor individuals, right? We don’t like what you said, this is socially unacceptable. So we’re going to censor you. The next thing they do is they start censoring news sites, right? We don’t like the way you reported this. It doesn’t meet with our ideology. So we’re going to shut you down there. The next thing we now have, you see the progression?

Mike Papantonio:             Individuals, sites. Now how about where you’re censoring an entire government and nobody says, well, my God, there’s something wrong with that. You can’t censor an entire government. These people believe they could have censored all of Australia. And we don’t see a problem here, really?

Farron Cousins:                  Right. And they absolutely could have, that’s the scary part is, well, I mean, effectively they did, but they still have the power to do this. They could do it, I don’t know if they have the reach to do it in the US, but you could certainly do it in smaller countries and then build up from there to the point where we’re all citizens of Facebook at that point, I guess. I don’t know what it is.