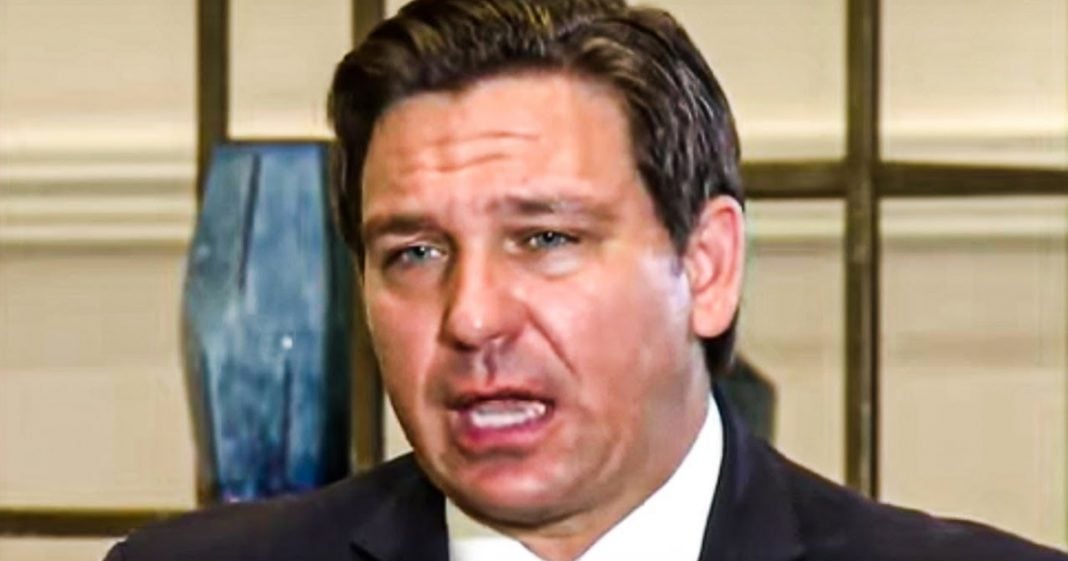 The Democratic Party in Florida is already well behind where they were at this point four years ago in terms of finding candidates to run for governor, and now the Party has to decided who is capable of defeating an unpopular Republican incumbent. That seems like an easy task, but Democrats have repeatedly failed to beat unpopular Republicans in Florida for over a decade, and they still don’t know how to do it. Ring of Fire’s Farron Cousins explains why this matters, not just in Florida, but across the country.

At this point, four years ago, there were multiple different Democrats in the state of Florida who had already announced they were running for governor. They had already been around the state making speeches, raising money, knocking on doors. But right now, four years later at the exact same point in the gubernatorial campaign, nothing. We do not have a single Democrat that has yet to declare, that has declared themselves yet, that they’re running for governor against our Trump loving Ron DeSantis in 2022. And I know that may seem like a long way off, but again, folks, as I keep saying, it really isn’t in political terms, it’s always the next election. And guess what? That’s the next election. So we’re there and we’ve got to talk about it at and the Democratic party in the state of Florida has to figure out what the hell they’re going to do because they’re already falling behind. And I know it seems like, wow, well, this should be a cakewalk for the Democrats. Yeah. So should have beating a guy like Rick Scott, who had to plead the fifth more than 70 times so that he didn’t end up in jail when his company committed the largest Medicaid fraud in the history of the United States, Medicaid or Medicare. I’m sorry. I always get it confused.

Um, yeah, Democrats lost to that guy three times, twice for governor, once for Senate. So yeah, Democrats in Florida always tend to struggle and now they’re struggling to find someone, anyone that can take on the hugely unpopular, Ron DeSantis, and win. Now again, Rick Scott was never hugely popular here in the state of Florida, still won his reelection. Then of course he won the race for Senate. Ron DeSantis is even less popular. His handling of the pandemic has been abysmal. He is now under fire for sending the vaccines to his wealthy donors neighborhoods via these little mobile vaccination units that the poor’s in Florida, we don’t get access to that, but his wealthy white donors sure as hell do. You know, come out like the ice cream man get your little vaccine. Run up to the window, put your arm up there. You’re good to go. It’s not actually like an ice cream truck. Please don’t think that it is. Uh, but you know, not too different going through the neighborhoods and giving people vaccines, which would be great for distribution, by the way, if you were doing it everywhere, not just for your wealthy donors. I digress. Democrats have a real problem in the state of Florida. They don’t know how to win campaigns and here’s why.

They think they have to go to the middle because, uh-oh, if we put somebody who is a little, little too progressive up there, they’re going to call them Socialist. They’re Going to call anybody who runs in the state of Florida a socialist because they don’t understand what the word socialist means. They’re not that bright, but they’re good at running campaigns and they’re good at convincing other not that bright voters, that that’s something you should be scared of. You shouldn’t, you should embrace it because it means you get taken care of. But we have a conservative elderly population here in the state of Florida, we have a fairly conservative Cuban American population here in the state of Florida and those populations are actually only getting more conservative and of course they’re getting larger. You know, the big boost of the former felons here in the state of Florida didn’t happen because the Republicans made sure it didn’t happen. They’re also working on new voter suppression techniques ahead of the 22 elections so that the Democrats really going to have to overcome these massive margins in order to have any kind of impact here in Florida.

Because you’re fighting against most, multiple things. You are effectively in a red state, you’ve got massive voter suppression and more on the way and your state party apparatus is trash. I’m sorry, but it is. You lose to a guy like Rick Scott once, okay, maybe that’s a fluke. You lose three times in a row and suddenly you have to look at it yourself and say, maybe I’m the problem. Then you lost to Ron DeSantis. You lost your one Democratic Senator. You better find somebody good and you better find somebody better than the names that are being floated around because one of the names being floated around is Charlie Crist. The guy who’s run for governor. He was governor at one point, but he’s run for governor again and he’s lost. He lost to Rick Scott, uh, ran for Senate and lost, the guy’s a serial loser because he keeps changing parties and changing affiliations based on which way the wind’s going and nobody trusts him. Do better Florida Democrats because I’m tired of having idiot Republican governors screw up my state.