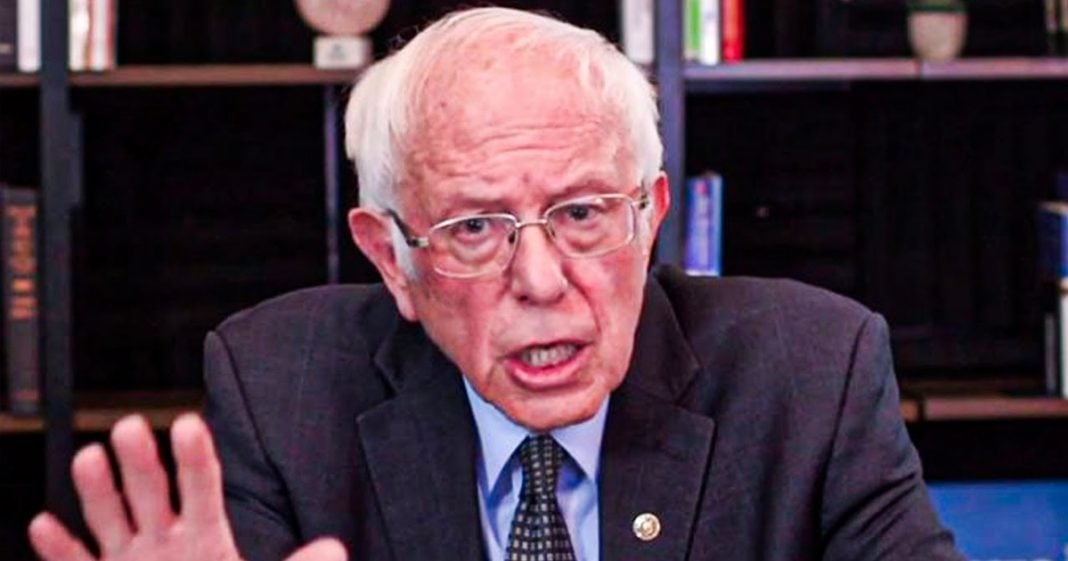 During a Senate hearing this week, Budget Chairman Bernie Sanders called out billion dollar corporations for paying their employees “starvation wages” that forced them to need government assistance in order to survive. No working person should have to rely on the government so subsidize their wages – especially when the company they work for pulls in billions in profits every year. Ring of Fire’s Farron Cousins explains why Bernie is right to call out these corporate leeches.

During a meeting this week with the Senate budget committee committee chair, Bernie Sanders Took the time To talk about the fact that we have billion dollar corporations in this country, companies that pull in more than a billion dollars a year in Profit that are paid Paying their workers, what he described as starvation wages. And as a result of that, these starvation wages lead to these workers being forced onto government assistance programs, meaning that we, the taxpayers are having to subsidize the low wages of corporations. One of the ones he specifically called out, obviously it was Walmart. A Walmart has now announced by the way that they are going to increase their company-wide minimum wage to $15 an hour. So that’s good for them. That’s more than the rest of the is going to get thanks to the Senate parliamentarian. But Bernie Sanders is 100% right with what he is talking about here. And Walmart is not the only culprit that does that. We have grocery store chains across the country that do the same thing.

We have, uh, you know, uh, other big box stores, not just the grocery stores, the big box stores that do this same Kind of thing. You know, up Until recently, we had the Amazon warehouses doing the exact same Saying these companies come into these areas And there’s a great book by the way, that explains This in the most Beautiful detail I’ve ever seen. I think it’s more than a decade old at this point, but it’s called the great American job scam by Greg Leroy it, read it, read it, read it, read it. It is one of the best books you could ever possibly read. But anyway, it explains how this whole scam that Bernie Sanders is talking about, uh, happens. You have these companies who come in and, and much like we saw with Amazon’s Q2. Remember they come in, they get the cities to basically bid against each other. To see who’s going to give them the most benefits. You know, we’ll give you 2 million in tax breaks. We’ll give you 3 million. We’ll give you, uh, 2 million plus all this extra land here and you know, all these other perks. And then the company picks, okay, well, I’ve got everybody begging me to come here. I’m going to pick this one.

And then they pay it Such low wages that the workers in the area end up on public assistance programs, which further drains money out of the local economies. So it’s a twofer. And usually you only hear about one or the other, but it really is a double, double whammy, I guess, for lack of a better term. Anyway, Greg Leroy’s book explains a beautifully. Bernie Sanders explained it beautifully in the hearing this week. And we all need to understand that this is what these billion dollar corporations do, and $15 minimum wage for them. Hey, it’s great that you’re voluntarily moving it up to that point. It should be higher If you You’ve ever talked to somebody that works in one of these big box stores. If you have ever talked to somebody that works at a Walmart, and if you haven’t please, I encourage you to do so. I have talked to many of them. This is not a fun or easy job. This is not a sit around and do nothing kind of job for a lot of them. Some of the big dudes I know that have worked at a Walmart.

This is backbreaking labor, And they get paid a pittance for what they do. I don’t know anybody Who’s come out of that from being a stalker that hasn’t ended up with some kind of like chronic injury or chronic pain from doing this job. And it’s the same at target. It’s the same at Sam’s club and Costco and all these other stores, folks Talk to workers. That’s where you’re going to get your real information from Until then Bernie Sanders people like Greg, the Roy. Again, the book is the great American job scam it’s from many years ago. Uh, but beautifully written, beautifully explains all of this. So if you can’t talk to a worker about how bad things are, listen to these two other individuals, because they nail it as well.