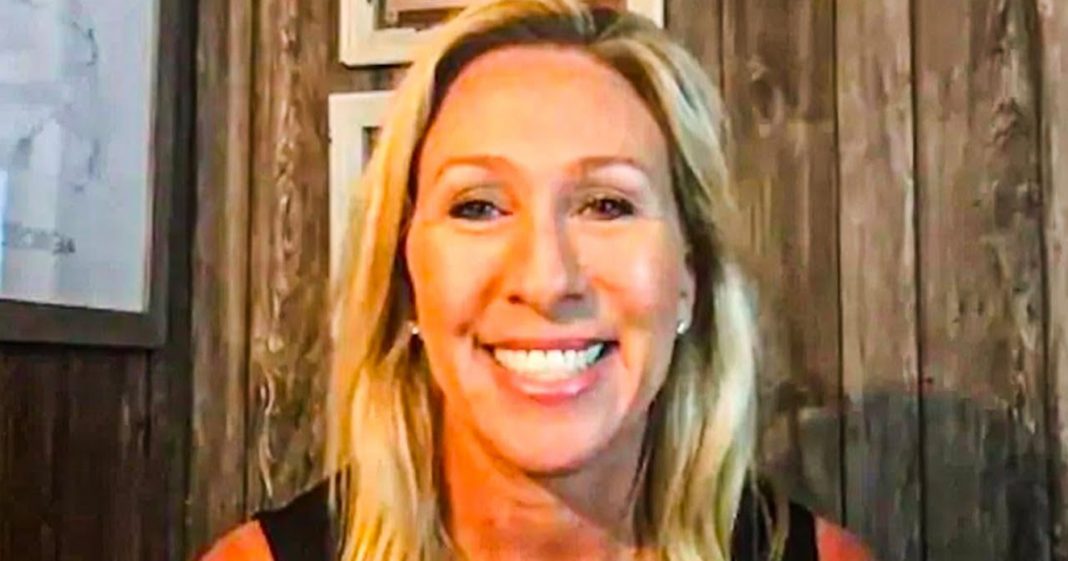 Marjorie Taylor Greene showed exactly what Republicans do when they can’t win on issues: They turn to bigotry. Greene helped to reignite the Right’s culture wars this week with the idiotic sign outside of her office declaring that there are only 2 genders, but the issue runs far deeper than just signs and slogans. Republicans have convinced millions of Americans to care about issues that have no impact on their lives, and Ring of Fire’s Farron Cousins explains why they do this.

This week representative Marjorie Taylor green, once again made a spectacle of herself and just brought the whole level of class of Congress down a couple notches again, when she put the sign outside of her office, you know, saying there’s only two genders and she did this to directly mock her neighbor across the hall who has a transgender daughter in her. Uh, the, the member of Congress had put a transgendered flag outside of her office. So Marjorie Taylor green across the hall goes out, makes a video of her putting this. There’s only two gender stickers and does her little thing and marches along. And, uh, all of this is regarding the equality act, uh, currently in Congress. And here’s the thing about what Marjorie Taylor green is doing here. She is perpetuating something that Republicans have been doing for decades, and that is, as we all know, the culture Wars, the one thing Republicans do really, really well is convinced stupid people to care about things that actually have no effect on their lives whatsoever.

And that’s what we’re seeing with this transgender issue. We have seen it for years on the issue of transgendered rights. Republicans have gone out there and said that if you allow a transgendered woman to use a ladies’ bathroom, well, my God, there could be some perversion there. Your, your daughter, wouldn’t be safe. A man can dress up as a woman and assault her in a restroom. And that’s why we got to stop that as if that’s a thing that actually happens. Folks, guess what? It’s not, there’s no facts to back this up. And honestly, as of right now, there’s literally nothing stopping an individual from doing that. Anyway, Republicans were just using that as this kind of false flag type thing to say, wow, this is why we can’t do it. Oh no. And then this week a Marjorie Taylor greens, one of the people coming out, Sam, but what if a, uh, a transgendered woman wants to play women’s sports?

You can’t compete with that. What are y’all really that stupid? No, I’m not talking to the members of Congress. Folks. I’m actually talking to Republican voters. Are you really that stupid? Does that affect you in your life any way? And that’s the whole thing about the culture war issues folks is that they actually don’t affect the lives of conservatives. Giving people more rights. Doesn’t take any rights away from you. It just makes everybody a little bit more equal in an increasingly unequal society. There is nothing wrong with that. It takes nothing away from you. It doesn’t endanger your family. It doesn’t endanger your religion. It doesn’t change your life. One bit. I don’t care if you’re uncomfortable around the LGBTQ community, that’s your problem. That’s your problem. You deal with that. But that doesn’t mean that we can’t protect these individuals from the discrimination that they face every single day, the party is selling bigotry and their voters, their followers eat it up because they don’t know any better because Republicans have spent decades trying to tell them that your life sucks because a transgendered woman wants to use the ladies room.

That’s it? And it’s not just with the, the LGBTQ issues. It’s with immigration to the bigotry there. Oh, well, yeah. You’re not getting paid a good wage. Not because your employer is greedy as hell, but because all these people coming across the border, they’re taking your jobs. Oh. And by the way, they also want to rape and murder us. Trump said, no, they don’t. I know they didn’t. There are literally jobs here in the United States that American workers simply don’t take a great example of that. As a state of Georgia, about 10 years ago, passed a very restrictive immigration policy, basically getting rid of the migrant workers that come during the farming seasons. Do you know what happened there in Georgia after they did that? And you couldn’t bring in these foreign workers, Americans didn’t take the jobs and the crops sat there, rotting in the fields.

So, but the bigotry is what got it passed. And they’ve been doing this for years. It’s the bigotry, the same kind of bigotry that Reagan came out with the welfare Queens, these lazy black people on welfare making more money than you. And they’re not having to work. Okay. Well, that’s not the fault of the people on welfare. That’s actually the employers Reagan. And we knew that I always like to at the time, but I probably still could have figured that out. But Republicans always turned to bigotry because they can’t win on issues. They turned to culture Wars because they got nothing else. They got nothing left. As I’ve repeatedly said over the years, the Republican party has only had one new idea in 40 years and that new ideas, what if we cut taxes for the wealthy and then the poor people will get more of it.

Oh, it’s an idea that failed. But it was an idea and it was new, but that’s it. That’s all they’ve had in 40 years of being in power. That’s it? Where’s that healthcare plan by the way that they’ve sworn for over 10 years now, all we’re working on is common. It’s common. It’s common. Trump promised repeatedly throughout his administration. I think actually 17 different times. If I’m not mistaken that, uh, we have a health care plan coming in a week or it’s coming in two weeks, never, never, ever, ever came to fruition. The closest we got was when, uh, Kaley McEnany came out with that book of empty pages and said, here it is, no, you can’t see it. Republicans have no ideas. So they turned to the stupid talk of culture, war issues that doesn’t actually affect anybody, except the people who, Hey, maybe they won’t be discriminated as much in this country. Those are the people that are affected. And if you’re not one of them, then you really have, have no say in this, it doesn’t affect your life at all. You still get to go to church. You still get to have your family unit. You still get to watch your kids play sports. If that’s what they choose to do, your life doesn’t change at all. But for some, their life may get a little better. But Me, that doesn’t mean yours gets any worse.