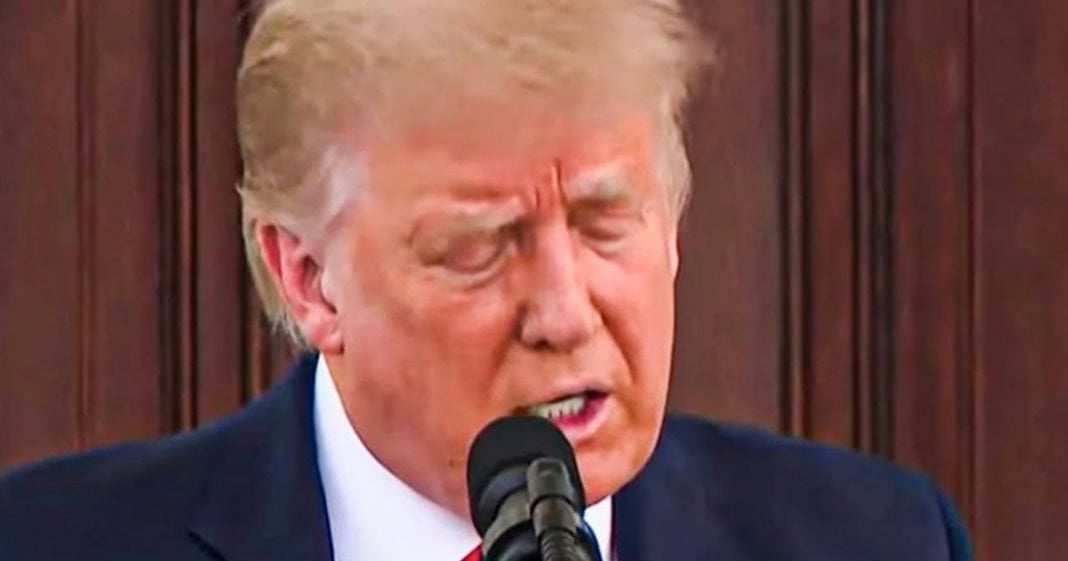 Trump’s financial records are now in the hands of prosecutors in Manhattan, allowing them to put the final pieces of the investigatory puzzle in place. This won’t be an easy task, as the number of documents is reportedly higher than one million. But Trump now knows that he can’t hide from this investigation or any others, and the dam is about to break wide open. Ring of Fire’s Farron Cousins explains what’s happening.

Earlier this week after the Supreme court decided that Donald Trump can not continue to hide his records from investigators over a million pages of document, uh, documents Hughes me were handed over from Donald Trump’s accounting for amazing cars over to the process [inaudible] in Manhattan. The Manhattan DA’s office now has over a million Trump’s financial records, including, but not limited to tax returns, communications about tax returns, uh, filings on worth of buildings, which is huge, uh, related to this case. And of course, probably about a million others. There is a lot of information to sort through. And unfortunately, due to the grand jury secrecy rules, we’re not going to know what any of this information is, but that’s okay. We will, of course eventually find out if any of this goes to trial. If it doesn’t, we’ll probably never know what’s in these documents. So here’s the thing.

And this is the bigger part of the story to me, obviously, this is horrible for Trump and his kids, and yes, it’s great for those of us who have been longing for some kind of accountability for the Trump family. So, yeah, that’s wonderful and great. What this really means though, is that all of these other law suits and things investigations going on with Donald Trump, the dam broke earlier this week with that Supreme court ruling. And that ruling may have just been pertaining to the documents in New York. The way the ruling was issued indicates that even if Trump tries to hide from any of these other lawsuits that he is facing, he is not going to be able to, to do that after all his big excuse was you can’t do this. I’m president, you got to wait till after I leave office and the Supreme court, including, you know, some of the conservatives there said, well, you’re not president anymore, buddy.

So got to face it. Nothing we can do to continue to protect you, even though we’d probably like to, we can’t do it. So the dam has broken now back to the documents at hand, right? These are the final pieces of the puzzles, obviously that the investigators need to put together. But like I said, over a million documents, this is not going to be fast, right? We’re not going to see some crazy new developments in the next week or so, but in the coming months, what we will see as the prosecutors using these documents to go forth and call more, uh, witnesses, get more testimony in front of the grand jury. Uh, hopefully what I imagine they’ll try to do. This is typically what you do in situations like this, uh, call in the small guys first, see if you can get any of them to crack, see if you can get any of them to admit to what you’re investigating, and then you call them and the bigger fish and the bigger fishery they’re going to come in and lied to you about what the little guy said, or they’re going to corroborate it at which point.

Hey, wonderful. Yeah, you’ve got your thing, but you try to get the smaller people on the totem pole to crack because going through these documents, you’re going to get a lot of names. Like I said, they have the communications and that almost is as big as the financial records themselves. So you’re going to find out every little player that was involved in this. And if those little players don’t want to get hit with charges of their own, for going along with any of these alleged schemes that may have taken place, they’re going to have to come clean, they’re going to have to work deals. And that’s where the fun really begins. Again, not going to know anything. I mean, probably longer than a few weeks. I imagine given just the load of documents, but soon, soon, it’s all going to come crashing down. And we’re going to know a little bit more about whether or not Donald Trump is as corrupt as we all pretty much know he is.