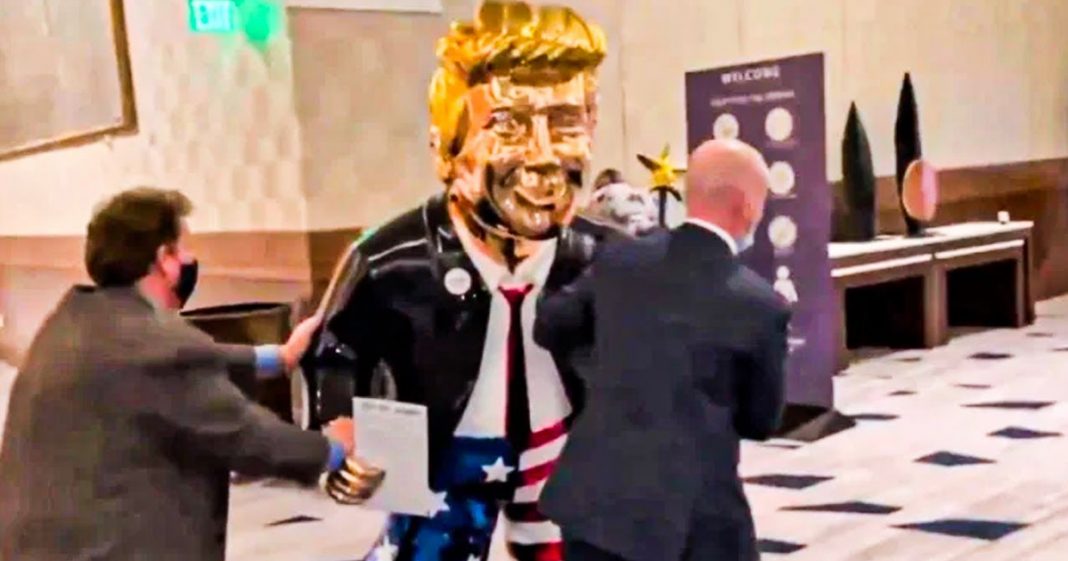 CPAC attendees will have the opportunity to live out their wildest heathen fantasies this weekend, as the conference is set to feature an actual golden statue of Donald Trump. These individuals completely lack self awareness and they have become caricatures of themselves with this latest stunt. Ring of Fire’s Farron Cousins explains what’s happening.

CPAC kicks off this weekend. And for all of those who are going to be in attendance at this very likely to be super spreader event, just know that your dreams, your heathen dreams will finally becoming true as you will legitimately have the chance to worship a golden statue of Donald Trump, Uh, photos that have come out of the setup of CPAC have revealed individuals wheeling in literally a golden statue of Donald Trump. Now I’m sure the thing isn’t made of actual gold, but it is a gold plated or gold colored, uh, shiny reflective metal In the shape of Donald Trump. Uh, you know, the, the perfect, perfect metaphor for what this Republican party has become. And what’s funny is that they don’t even realize the irony of this. They don’t see it as that they are for all practical purposes. You know, the people down at the bottom of the mountain, in the Charlton Heston movie, the 10 commandments, they got annoyed that he was up there taking so long, getting the 10 commandments. Uh, so they melt down all their gold and they create the big golden calf and they say, okay, well now we worship the golden calf. We love you golden calf.

Uh, by the way, it’s not just in the Heston movie, that’s also in the Bible old Testament. So anyway, that’s what these idiots have done. They have created their own golden fatted calf in the form of Donald Trump. And to that, I still have to ask this question that I ask every time, like why, if you’re going to pick any random human being across the planet to worship as a God, why this guy, like, I really want an explanation, what is it about him? Cause we know it’s not his intellect. We know it’s not as appearance. Uh, there’s plenty of people on this planet that have way more wealth than he has way more power than he has. So, so why this middle of the road guy, he’s not religious. So you can’t say it’s a religious thing. So again, I really want to know like what made you pick this fat slob for lack of a better term, this disgusting little pig To be your new God, I don’t know. No, if I really want an answer to that from these Republican idiots, but Hey, you’ve made them into your God. You’ve made him actually into the golden idol. So you better hope that that Bible you cling to every day is wrong. Because if it’s not, you’re going to have quite a bit of explaining to do when you get to the pearly Gates.