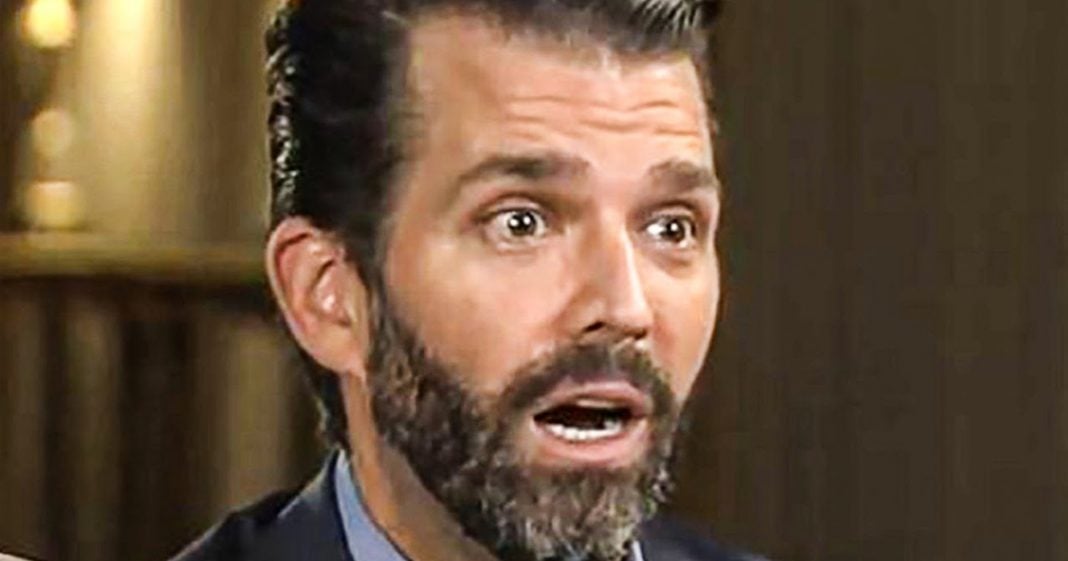 Donald Trump, Jr. has found himself a target of investigators and prosecutors in New York, along with Trump Organization officer Allen Weisselberg, as the two acted together to control the company’s financial during the Trump presidency. While the scope of the investigation still remains a mystery, those with knowledge now say that Junior could be in serious hot water. Ring of Fire’s Farron Cousins explains what’s happening.

Donald Trump Jr. Has now found himself smack dab in the center of that investigation, into his father, taking place in New York. And nothing about that is surprising actually, because the investigation is not just into Donald Trump, Sr. The investigation also encompasses the entire Trump organization and their financials. So the reason Donald Trump Jr is now getting roped into this is because, well, who do you think has been running the company for the last four years? So here’s the fun part like this. This is where it all comes together here. Obviously Donald Trump and the Trump organization are being investigated for possibly, uh, over-inflating values to banks in order to get loans that would be bank fraud under, uh, valuing properties. When reporting to the tax authorities that would be tax fraud, uh, maybe a combination of the two, maybe one or the other Michael Cohen seems to think, uh, they did both of them and Cohen was actually involved in it if it did happen.

So that’s where we’re at. But now that we know Donald Trump Jr, uh, is also being targeted, I guess you would call it in this investigation. That means that they have likely, likely uncovered evidence to show that this practice didn’t stop. When Donald Trump’s senior became president, they may have enough evidence to tie it all the way through basically the entirety of the Trump organization. And if that’s the case, it would likely eventually rope in a younger brother, Eric as well, who has been running the company with Donald Trump Jr. But Trump Jr is the one who has the most communication with his father Trump’s senior. Uh, Trump Jr. Is actually the guy in charge or was the guy in charge of being the gatekeeper between Donald Trump and his finances. Uh, you know, Trump Jr was effectively the blind trust, uh, that Trump put his finances in.

So that’s why Trump Jr is a little bit more a person of interest, I guess, at this point, uh, than Eric Trump would be. But I don’t think for a second that Eric Trump is going to get away. Scot-free on this. If in fact, the Trump organization, as a, as an entity engaged in this kind of behavior, another person who is also according to new reports at the center of these investigations is a Trump organization, chief financial officer Allen Weisselberg Weisselberg. His name has been thrown around for years and years, uh, mentioned in this investigation, that investigation and other investigation, uh, the guy’s no stranger to it. But again, if you’re pulling in the financial officer, likely means you’ve got some evidence that financial crimes were likely committed, or at least you think you’ve got enough to prove that they were. So that would be why you would want to bring in the chief financial

Officer. So there you have it, But that’s the latest developments on all this. And, uh, I got to say the last two weeks with those investigations up in New York, getting pretty interesting. Hopefully we ended up for some charges here pretty soon, because I think we’re all watching this with bated breath at the moment, hoping that there’s something in here to take down these, Uh, jackasses. So got to wait and see though.