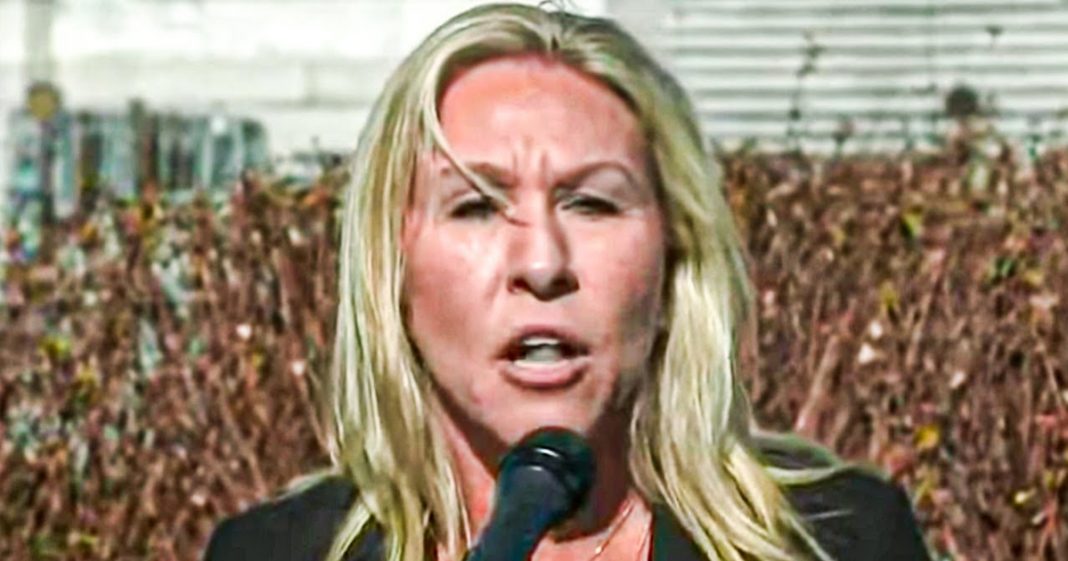 Political analysts are predicting that, if the current trajectory remains constant, Republicans in the very near future will only become more extreme, leaving people like Marjorie Taylor Greene as the “moderates” of the Party. This is certainly a real possibility, as the public has repeatedly showed us that so far there isn’t a level of crazy that they aren’t willing to elect. Ring of Fire’s Farron Cousins discusses this.

So there was an interesting article out this week that I wanted to talk about in this article, quotes, numerous different experts, you know, political analysts, uh, you know, people who have been studying the Q movement since it’s, uh, emerged. And these individuals actually think that on the current trajectory that the Republican party is on, it’s only going to go further down that rabbit hole. And eventually people like Marjorie Taylor green are going to be viewed as moderate Republicans, because that is how far down this conspiracy hole. They see the Republican party going. If again, the current trajectory does not change. Um, that’s a terrifying thought, right? I mean, just yesterday we saw Taylor green go out there and post that big sign outside of her door that there’s only two genders. Um, and that’s because her neighbor across the hall put out the, uh, the flag supporting transgendered rights and, uh, yeah, it’s all very juvenile would Marjorie Taylor green is doing.

And to think that in the near future, she might be like a Mitt Romney character where you’re like, well, at least Marjorie Taylor green, didn’t vote to, you know, whatever horrible thing, the more extreme Republicans want to do folks. That really is a terrifying thought. And honestly, I don’t think it’s out of the realm of possibility whatsoever. The Republican voters in this country have proven that they’re okay. They’re absolutely okay. With any level of crazy you throw with them so far, we have not yet seen, except I think with one exception. And I’ll talk about that in a moment. But other than that one exception, you haven’t seen anything you can throw at Republican voters where they’re just like, nah, I’m not going to do it. And the one exception of course, was Roy Moore in Alabama, after the stories came out about him, cruising malls, looking for young, uh, preteens and you know, very young teenagers, certainly under-aged teenagers back in the day.

Um, but even then Roy Moore got like 48% of the vote. So they just barely said, we’re not okay with that. Other than that, you’ve got the, the queue supporting, uh, representatives. Yep. Let’s vote for them. Cool. What about ones who have, you know, engaged in horrendous behavior or, you know, husband is a sex offender kind of person. Sure. Send them all in. We don’t care. These are the people the Republicans choose. So it only stands to reason that if a more extreme candidate become becomes their nominee, they would also choose that person. And one of the biggest culprits here is not just by the way, the Republican voters, the culprit is gerrymandering. So when you have these districts across the country that are so red, that even a potato with an R written on, it could win, then yeah, you’re going to get the extremists because those Republican districts truly will vote for anyone who calls themselves a Republican. So if you get a crazy one in there, the crazy one will get elected. And then once the crazy one gets elected, it sends a message to all of the other nutjobs throughout the country that, Hey, maybe I could do that too.

And again, it plays itself out a lot more in the gerrymandered districts, you know, Marjorie Taylor green, that is a safe Republican district. If she does not have a strong Republican challenger up against her, she’s going to be there for awhile. Kind of like Matt Gates, not saying that this area, by the way, is gerrymandered so much. This is just a red, red, red area. And it’s a, you know, a little square tip in Northwest Florida. Uh, it’s not all weird shaped like Dan Crenshaw, uh, district, you know, shaped like a big old hook coming down. Yeah. That guy wouldn’t be in Congress, if not for gerrymandering Matt Gates. On the other hand, he’s here because he found a home in a deep red district. But regardless of what it is, these deep red districts were only Republicans can win whether through gerrymandering or not, they can put up the crazy people and the crazies can easily win. And more districts like that mean more candidates like that mean a Republican party in Congress moving further and further to the right. These analysts are correct. And if we want to stop it, that’s up to the Democrats to actually do something and start delivering for the American public so that they quit flocking to these absolutely unhinged individuals looking for a better life.