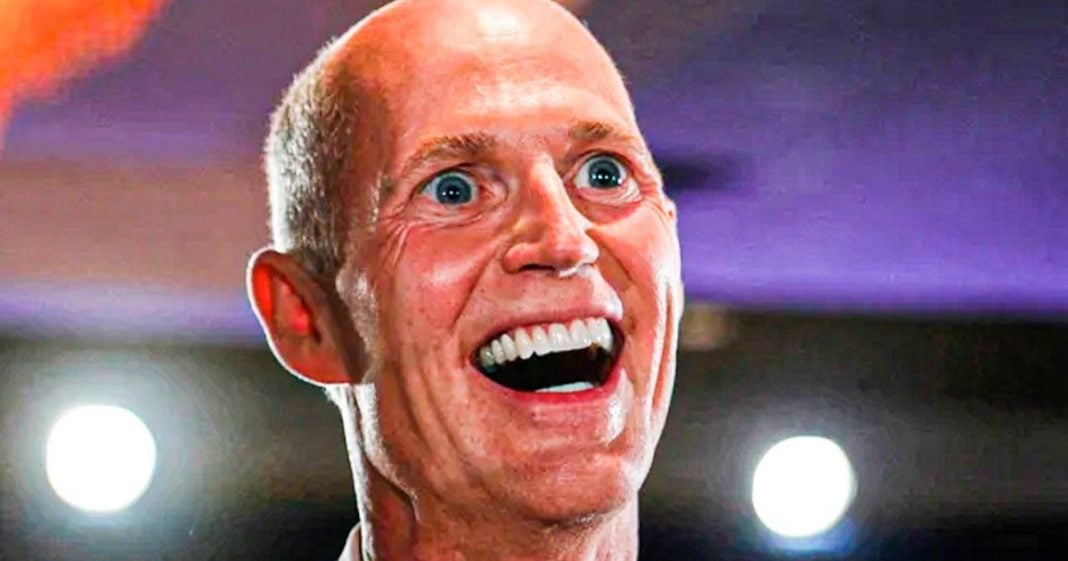 Republican Senator Rick Scott circulated a memo (as head of the Republican Senatorial Campaign Committee) this week officially declaring the civil war inside the Republican Party to be over. Apparently, the rest of the Party doesn’t quite agree with Scott’s analysis of things, but at least someone in the Party is trying to show a little bit of leadership…or is he? Ring of Fire’s Farron Cousins explains what’s happening.

Republicans claim to hate cancel culture, yet Republican Senator Rick Scott this week, as the chair of the national Republican senatorial committee, did a little bit of canceling of his own. He announced in a memo that the Republican civil war is canceled. In fact, that is, that is actually word for word what he said, the Republican civil war is now canceled. The long-running impeachment show is now over. This political theater should have been held at the other end of Washington in the Kennedy center instead of the US Capitol. It was an unserious circus. It’s over. Now it’s time to look ahead, he said in the memo. What Rick Scott is trying to do here is he’s trying to get all of his clowns back into the car, right? That’s what’s happening, you know, stop being crazy over here. Stop being divisive over here. Stop calling each other out, making us look bad nationally, come on, everybody back into the car. Let’s just drive forward.

Now in theory, this is the right thing to do. Now I don’t want people thinking I’m sympathizing with the Republicans or cheering them on in any way. I will never do that. I promise you. But just from a structural standpoint, if you’re trying to get ahold of your party, if you’re trying to get ahold of your business, whatever it is, yes, this is what you would do. You would need somebody to emerge as a leader and that is what Rick Scott is attempting to do here. He’s saying, listen, guys, this is done. Stop it. Stop the fighting. Stop the divisiveness. We are one, let’s prevent, present, excuse me, a united front to the country and show them that we’re, we’re good and we don’t have problems. And he continues in his memo and he says, the Demo, Democrats control the White House, the Senate, and the House of Representatives, in other words, they control Washington. The notion that there’s a civil war within the GOP does not need to be true, should not be true and will not be true. Fanning these flames in both the media and our own ranks, desire a civil war.

So those fanning the flames. I, excuse me. I realized after I said that, I left out that word, those fanning the flames obviously want this to happen. The media wants it to happen. The Democrats want it to happen. Uh, listen. Yeah, I think we kind of do, but also at the same time, even if we weren’t fanning the flames, Rick, you don’t get to shift the blame. See like you were actually on a good track. That’s the problem with Republicans. They can say something good for about 10 seconds before they immediately shove their foot, I don’t even want to say in their mouth, because I think we all know where they’re shoving their own feet. But anyway, you put your foot in yourself as you should not, by saying things that are just blatantly untrue because this Republican civil war taking place is not because the media is pointing out, hey, look how nutso Marjorie Taylor Greene is.

Oh, hey, Lauren Boebert is posing for videos looking like Osama bin Ladin. No that, that’s, that’s not the media. That’s, that’s your crazy people in your party. You know, the fact that you have factions of the Republican party in Arizona, in Pennsylvania, censuring, censuring their own members because they didn’t vote the way they wanted on impeachment. That’s not a media creation, Rick. That’s not a Democratic creation, Rick. That’s your party showing the rest of the country how crazy they are and how there is no room within the Republican ranks for independent thought whatsoever. So send out your stupid little memos, right? Cancel the GOP civil war all you want, Rick, that’s not going to do anything. You wanted to emerge as a leader, but all you did was show us how weak and pathetic and how much you refuse to accept the reality of what’s really happening. You’re not a leader, Rick, you’re just another Republican follower who doesn’t know what to do now that your party doesn’t have a clear figurehead.