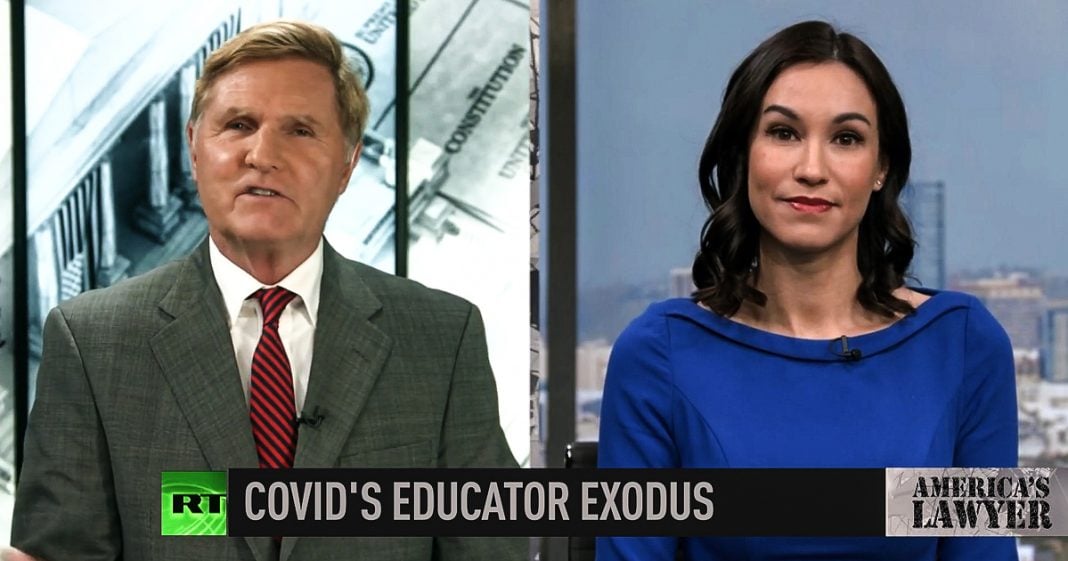 Via America’s Lawyer: Former NFL players sue the league over racial discrimination in its concussion settlement protocol which makes it harder for black players to prove cognitive decline. Mike Papantonio & Farron Cousins discuss more. Then, RT Correspondent Brigida Santos joins Mike Papantonio to explain how unsafe reopenings and extended work days due to COVID could cause the shortage to double, as millions of teachers are considering leaving their jobs.

Mike Papantonio:             A new report says that the NFL concussion settlement is discriminating against black NFL players. Wow. You talk about a subtle kind of discrimination that’s costing these folks money. Let me, first of all, a dear, a very good friend of mine, a lawyer named Chris Seeger put this settlement together. He did not include in the settlement anything about what the NFL is doing here. Take it from there.

Farron Cousins:                  Yeah. The NFL had set up all these criteria, you know, to test, do you really have CTE? Did you have enough concussions to impair your life? And if you did sure, you get the money, but what we found out now through this ABC investigation of all places, I was shocked they did this.

Mike Papantonio:             It’s not in the document that was the settlement. The NFL are the people saying, well, we can keep, we can save a lot of money by arguing, well, of course they have cognitive disabilities because they’re African-American, that’s literally what they are saying here, you understand.

Farron Cousins:                  And, you know, nothing stuck because there was nothing actually there. This was just the NFL trying to, you know, stop all this money from going out the door and this is another part of it. They’re just trying a new tactic here. What if we go with, well you’re African-American so you’re probably not as smart as a white person anyway, that’s the bottom line of what they’re doing here.

Mike Papantonio:             That’s exactly what they’re doing. I mean, you, you put into words exactly what they’re doing to these athletes. Most of these, a lot of these athletes, man, they were on the frontline for years just getting pounded, pounded. And they’re saying, yeah, we see some cognitive disability here, but it doesn’t have anything to do with you playing, getting your head smashed for, for, for eight years playing in the NFL. It’s a, really an ugly story.

Mike Papantonio:             Teachers are struggling. They’re struggling to do their jobs during the pandemic. Many educators now say that they’re planning to quit, retire early, get out of the business. It’s no longer rewarding. Brigida Santos is with me to talk about it. Brigida, how many educators at this point are, are leaving the profession due to the pandemic specifically?

Brigida Santos:                   Unfortunately, it’s quite a lot. Nearly 27% of K through 12 educators in the US say they’re considering exiting the profession or taking a leave of absence due to the COVID-19 outbreak. Now that’s according to a nationally representative survey of teachers, school administrators and support personnel. In November 77% of respondents said their workloads have increased due to new online and hybrid teaching models. Many teachers report that they’re now working 12 to 14 hours per day, instructing students who come to school, as well as those who attend classes online. Teachers say they’re also struggling to keep up with evolving local health regulations that leave them scrambling last minute, with every update. Now, in addition to working more hours for the same amount of money teachers are also not feeling like their districts are doing enough to keep them safe. You know, it’s not uncommon for classes to have students from 50 different households. That’s a lot of exposure for teachers who have to teach in class. Now the risk is no longer worth it for many of them.

Mike Papantonio:             Yeah. I mean, why would they want to live, leave a profession with low pay, low benefits, low level political support at every turn of the, every, everywhere you turn low level political support. And now the threat of death in a system where we’re not even giving them enough to make a difference. If you take a look at what’s happening to the educational level in the United States, it’s appalling and you can’t put it all on the teachers and say, they’re just not teaching. We’re not supporting it enough. Of course you leave when it gets to the point, you’re saying, you know, this job along with all that bad stuff, it could kill me too. Before the pandemic, didn’t we already have a national teacher shortage? I mean, because of these very reasons, weren’t we already seeing that?

Brigida Santos:                   We sure did. The US has faced a persistent national teacher shortage since at least 2015, which stemmed from layoffs that began during the great recession. But in 2018, there was an estimated shortage of about 100,000 K through 12 teachers. Now with the pandemic, teacher shortages are getting even worse. Here in California alone, over 3,200 teachers retired in the second half of 2020, which was an increase of over 25% from the same period the previous year and the demand for these jobs is only going to increase by an estimated 5% every year through 2028. As you said, poor pay and poor working conditions are absolutely to blame. Teachers earn 20% less than other people with college degrees and they often need a second job to pay necessities. Fewer people are going to college now to become K through 12 educators. Instead they’re choosing to become college professors and unfortunately the profession is suffering and so are our communities which depend on qualified teachers to educate our youth.

Mike Papantonio:             Yeah, and the ugly thing is now we’re blaming on unions because kids, they’re, our results are deplorable. When you take the United States result for educated children and compare it around the world, it’s embarrassing. I mean, when you look at the numbers, it’s embarrassing. And nevertheless, the, the, the point is, oh, the teachers are responsible. The unions are responsible. No, low pay, low benefits, low support by politicians. Now, the threat of death, all that adds up, this is a serious, serious problem we’re looking at right now. Are educators in the US though, are we at least getting them COVID vaccines yet?

Brigida Santos:                   Guidelines from the centers for disease control and prevention placed teachers in phase two of the vaccine rollout. But it’s really up to individual States to determine when educators are going to actually receive those vaccines. Now, at least 24 States have made some or all teachers eligible, but of course, scheduling appoint, appointments is dependent on the vaccine supply. Now, in other States, the policies are completely inconsistent and in many cases, absolutely unfair. For example, here in Los Angeles, teachers at the Wesley private school in North Hollywood, where tuition every year is about $30,000, received vaccines from the Northridge hospital through a special program, even though childcare and education workers under age 65, don’t currently qualify for the vaccine. The County says this shouldn’t have happened, but this is not the only story in the country about how the well-connected elites have cut the vaccine line. And as for educators, as a whole in California, they might be included in next months vaccine rollout, but 80% of LA county’s eligible seniors still can’t get the vaccine due to shortages. So this timeline is probably not very realistic.

Mike Papantonio:             And it all falls on this, what’s happening in our kids. Sometime go on, go online and take a look at where they spontaneously show up on a college campus and interview freshmen, freshmen and juniors, and talk about asking them well, who won the civil war? What was the revolution, who won the Revolutionary War? Who is, could you name one Supreme Court justice? If you listen to it, it is nauseated and, and nevertheless, they want to say, well, that’s because our teachers aren’t doing their job. You have to support these folks before we’re going to get the kind of results we want. Brigida, thank you for joining me. Okay.