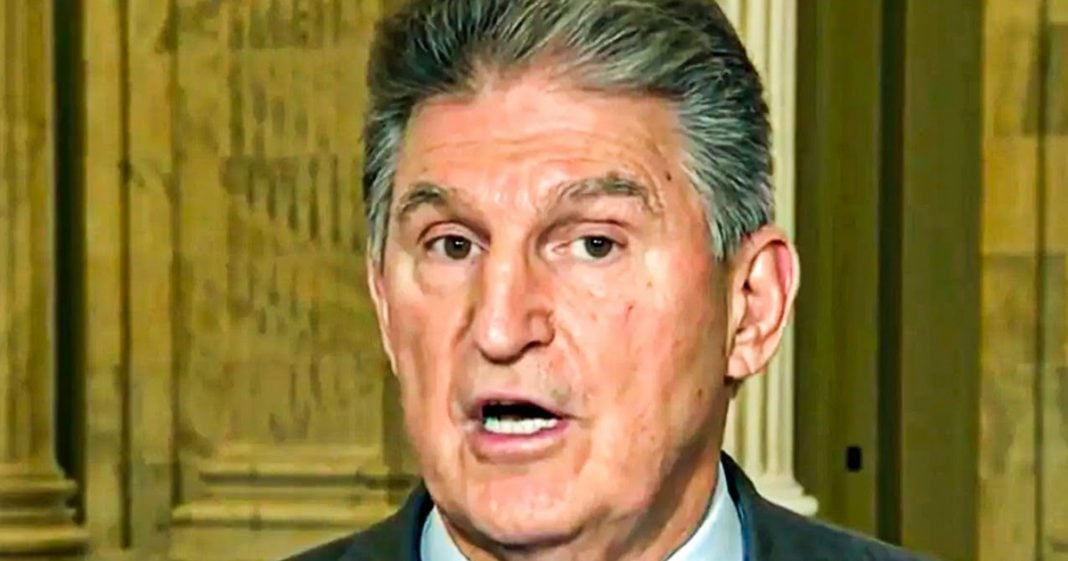 Democratic Senator Joe Manchin is not on board with the proposed $15 an hour minimum wage fight, and instead he wants that number to be a few dollars lower. The truth is that $15 an hour is the compromise, and the real minimum wage would be over $20 an hour if it had risen along with inflation. American workers need money, and corporations are hoarding billions – $15 an hour is not an outrageous demand, as Ring of Fire’s Farron Cousins explains.

Democratic Senator Joe Manchin from West Virginia has announced that he is going to put forth an amendment to the coronavirus relief package that instead of raising the minimum wage to $15 an hour over five years, would raise it to a paltry $11 an hour. And as I’ve repeatedly said with Democrats, sure, it’s better than it is now, but it’s still not good enough. That’s the problem with the plans from the Democrats, most of them, is that sure, it’s, it’s better than what we have, but not even close to good enough to solve any real problems. So Joe Manchin is out there actively trying to sabotage the fight for $15 and I think everybody needs to understand something here, that $15 minimum wage, that’s the compromise, $15 was the compromise. We should be pushing for, what I think it’s like $23 an hour, because that’s where minimum wage would be, had it kept pace with inflation and cost of living.

So $15 is the compromise, $15 is kind of the lowest we can go. And even if we get the $15 package as part of this COVID relief, it still takes five years to get us to that point. We, we need this now. I mean, this isn’t something that, okay, well in five years, guess what else is going to happen in five years, folks, inflation and cost of living increases and et cetera, et cetera, those things are going to continue to climb. So by the time we get to $15 minimum wage, it’s not going to be good enough either. That’s the reality we’re dealing with today and then you have idiots like Joe Manchin who come along and say, well, what if we just aim lower and keep in mind, there is no reason for this. There is no reason whatsoever for Joe Manchin to come in and say, all right, hold up.

Let’s not do this. He has nothing in it. No dog in the fight fight. So why? Well to protect his corporate donors, but that’s the idiotic part of the whole thing. You’re actually not protecting them. You’re actually hurting them because I know a lot of companies out there don’t want to pay $15 an hour or you have some small businesses saying, oh my God, if you do that, I got to cut workers. I’m just, I don’t have enough. I don’t make enough money to increase their pay by a few dollars an hour. Um, then you’re not running a good business by the way. I’m sorry to have to drop that bomb on you. But if you can’t afford to give your workers an extra $3 or $4 an hour, then, then there’s something wrong with your business. Or it’s just greed and you’re lying about it.

Those are the people that spend the money that actually drives the United States economy. And Joe Manchin doesn’t think they deserve a raise or at least not any kind of raise that’s actually going to make their lives any better. We can do better than Joe Manchin. We can’t let this guy, this one guy from West Virginia, hold the entire state ransom for the next four years. That’s absurd. It’s the same thing Mitch McConnell did. You get one dude from Kentucky that completely obliterates progress in the United States and now we’ve got one guy from West Virginia completely sabotaging the fight for $15.