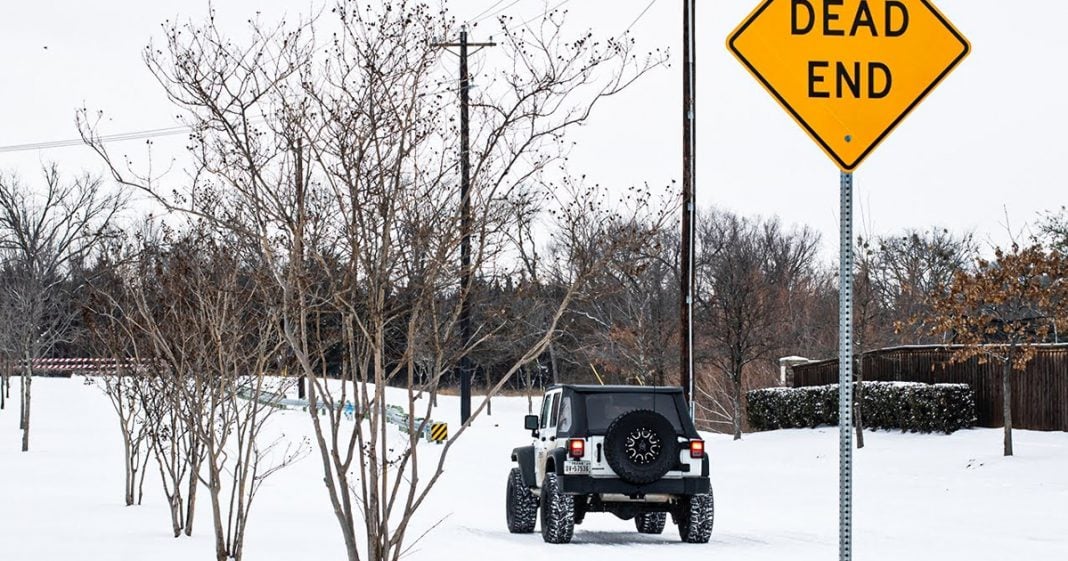 Utility companies in Texas have decided to add insult to injury to millions of Texans after last week’s winter storm, and many are now finding themselves on the receiving end of thousands of dollars in electric bills. This is what deregulation does, and the state of Texas is becoming a terrifying warning to the country about what solid Republican rule can do to Americans. Ring of Fire’s Farron Cousins explains what’s happening.

Reports are coming out every day of residents in Texas, getting hit by these astronomical power bills, some as high as $17,000 in the wake of last week’s winter storm Uri. And the reason this is happening is because Texas is one of the very few States out there where residents actually get to choose where their power comes from. You know, you actually have multiple different energy companies in any given area. You make the choice and that’s who you go with. Whole thing is very, very deregulated. So there’s few people looking over their shoulders and after last week’s outages and these power companies, you know, have to pay all this money to, to fix their systems, to update and upgrade. They thought, you know what, what if we just pass on all these prices to average consumers and suddenly your $200 power bill is a $17,000 power bill.

In the very beginning, when these stories first started coming out, a lot of us assumed, okay, it’s an error. It happens. We’ve seen that before. You know, somebody says I had a $90,000 phone bill, and then you call the phone company like, oh yeah, sorry. That was totally an accident. This is not accident. $3,000, $5,000, $8,000, $12,000, $17,000 power bills people are posting on social media. These are real and the energy companies now they’re not saying, oh, let us fix it. No they’re saying, if you don’t pay it, we’re going to shut off your power. These are real and these people are expected to, to pay these. And they have, obviously no means to do that. I think there’s very few people in this country, in fact, I’d wager a bet to say 99% of us who couldn’t pay a power bill like that if it’s suddenly got dropped on us, especially when we weren’t the ones who screwed up.

So now of course you have all these calls for the lawmakers in Texas to immediately forgive these power bills. But these power bills from the power companies, these power companies are the ones who put the politicians in place. I mean, go to open secrets, look at how the money flows in the state of Texas, from the energy companies to the politicians. What are the odds the politicians are going to say, hey, sorry, donor, you’re not going to get your money? What do you think is going to happen then? The power company is gonna say, well then, sorry, politician, you’re not going to get your money. Texas is very quickly becoming a completely failed state and it is 100% because of Republican policies. There is no other way to slice that folks. This is the way it is because Republicans created it this way to benefit the power companies and now they’re passing the problems onto you. Privatized the profits, externalize the risks. That is what conservative government gets you and it’s the average voters, the citizens, the constituents who always end up paying the price.