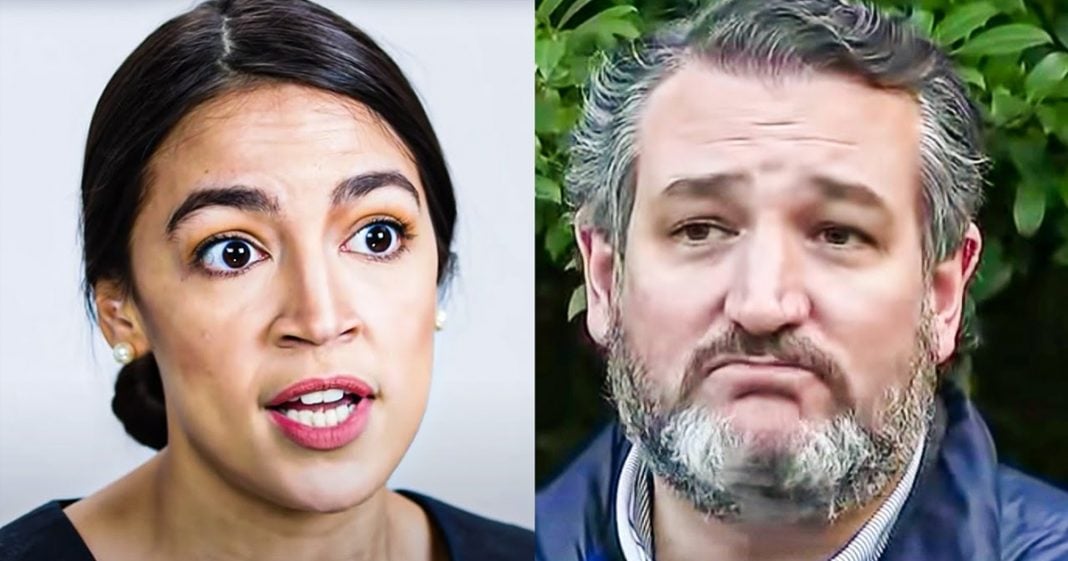 Democratic Representative Alexandria Ocasio-Cortez spent the past week raising money for victims of Winter Storm Uri in Texas, all while Ted Cruz was busy doing damage control for his own career. The state needed a leader, and AOC, along with Beto O’Rourke, rose to the challenge. Meanwhile, state officials are still missing in action, and Cruz is still trying to save his own behind. Ring of Fire’s Farron Cousins discusses this.

Right now the biggest concern for Ted Cruz is not his constituents in the state of Texas. It is rehabilitating his image after the disastrous decision last week to fly out of the country while his constituents were freezing to death, quite literally freezing to death. AOC, representative Alexandria Ocasio Cortez, on the other hand, a Democrat from New York decided this situation needed a leader and she decided to be that leader that Ted Cruz could have been and should have been. So she flew down to Texas, along with local politicians, started filling meal boxes for residents. So she was actually down there doing the groundwork that Ted Cruz attempted to do on Saturday by taking some photos, give, putting water in people’s car. AOC’s actually filling the boxes dude. But in addition to that, she also raised $5 million for needy Texas families to buy them the supplies that they need.

The situation again, needed a leader. People were struggling. They were looking for help. They were looking for anyone to step in and be the leader and by God AOC did it. Beto O’Rourke also played a big role in this. He raised over a million dollars. He’s down there on the ground in Texas as well, helping out in the way that Ted Cruz could have done. So all those Republicans who defended Ted Cruz leaving, and by the way, Ted Cruz’s lies are unraveling more and more by the day. We find out over the weekend that he invited his college roommate down there with him. He was not planning on coming right back. We know when he bought the ticket and all that, like, no, it’s all a lie. It’s all a farce. Ted Cruz is screwed. But anyway, all of those Republican politicians or, and Republican talking heads, by the way, who said, well, what can Ted Cruz do? You know, he’s a, can’t do la la.

Nah, he could’ve done what AOC did. You could’ve done what Beto O’Rourke did. But instead you chose to not just leave, but blame you’re leaving on your daughter’s, which we now know is also another lie that you told. AOC takes a lot of heat from Republicans. Texas is a red state run by Republicans. So when this disaster struck, did she sit there on her high horse on Twitter and say, told ya? Nope, nope. She said, wow, people are suffering. I need to help. That’s it. That’s what happened. She raised money and, and, and again, huge here, goes down there. These aren’t her constituents, this isn’t her responsibility, but she knows that as a human being, it is her responsibility and that’s the difference there. We have too many politicians who look at disasters happening in other States and they say, wow, it sucks for y’all man.

Hey, you’re a representative you get on that. She didn’t care. Wouldn’t have mattered where it was. She’d have been there. Folks, this is the kind of leadership we have been craving in DC forever, forever. This is almost unheard of at this point and I think AOC and Beto O’Rourke by the way, but he is again, not an elected official. So again, it’s still great he’s doing what he’s doing, but I think AOC being an elected official from a different area, different state, recognizing the need of these individuals, they needed a hero and they got one with AOC.