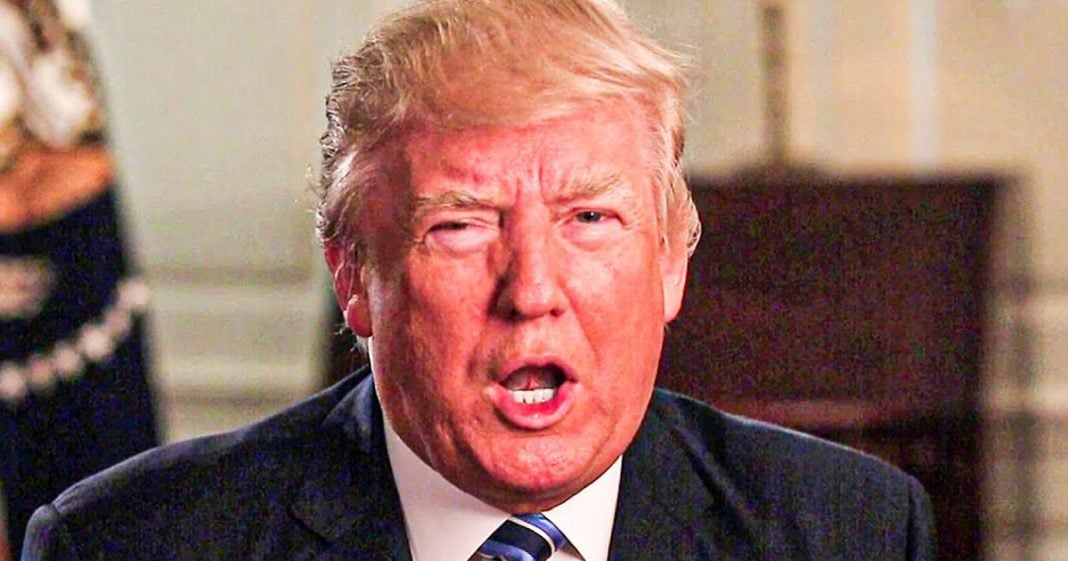 According to a new report by Axios, Donald Trump is planning to declare himself the 2024 Republican nominee during his CPAC speech. This would be an absolute disaster for the Republican Party, but would likely be the best thing to ever happen to the Democratic Party. Trump is hated outside of the Republican Party, and doesn’t have enough broad appeal to actually win an election, as Ring of Fire’s Farron Cousins explains.

This coming Sunday, Donald Trump is scheduled to speak at this year CPAC convention, where according to Axios, Trump is actually planning a grand show of force to declare himself the presumptive Republican nominee for the 2024 presidential election. Now, how he’s going to do this remains to be seen, I guess we’ll all have to tune in Sunday to find out. But we do know that Donald Trump wants to be the figurehead of the entire Republican party, from his position at Mar-a-Lago that’s a little difficult to do. So he has to come out and somehow insert himself into the, the party, into a leadership position. And the only way he could do that is if he does come out and say, hey, I’m running in 2024 and hey, I’m already the presumptive guy. You got to fall in line with me. You got to listen to me.

You got to do what I say because I’m your nominee. Um, makes sense. Totally sounds like something Donald Trump would do. Question is, does it play out like Donald Trump thinks it plays out if, of course this is what he’s planning to do? So let’s assume for a minute that yes, everything about this report is totally accurate. I mean, honestly, we have no reason to doubt it, so let’s assume Donald Trump is planning this. He’s all excited. He’s getting ready for Sunday. It’s like Christmas morning. Um, does the rest of the Republican party follow through with this? Probably not. There’s a lot of different polls out there right now and we’re gonna talk about one later today, but most Republicans not huge fans of Donald Trump, certainly the rest of the country, independents and Democrats, definitely not. So you’re dealing with only your base. Only the people who have registration cards that say Republican on them.

Those are the only people you could hope to get to vote for this guy and Republican leadership understands that. So while they can’t publicly come out and denounce him because they don’t want to him off, they can quietly just let’s move along then. And that’s what they’re hoping to do. That’s what they would like to do. They would love nothing more than for Donald Trump to just sit down there at Mar-a-Lago play golf all day and just be happy and stay out of politics. That is what the Republican party wants. So if Donald Trump re-emerges, it creates a massive problem for the Republican party that was hoping that the Trump cancer was in remission, but unfortunately it is coming back and that’s what they now have to deal with. They let this cancer metastasize, you know, they didn’t treat it when they could. You had two different opportunities to convict him in a Senate trial.

You failed to do it. The insurrection that took place on January 6th has caused tens of thousands of voters per week to leave your party because they hate him. And now here he comes, he’s just a week away from declaring himself all up in our business for the next four years. That’s what he’s doing. He’s coming out and saying, I ain’t going anywhere for four years and that is the worst thing that the Republican leadership could have happened to them. They don’t want it to happen. They’re not going to admit that publicly, but I promise you behind closed doors, that’s what they’re all saying. They’re hoping that this Axios report is wrong because if it’s not, we get four years of Donald Trump being a at a time when the public can’t stand him to begin with. Yeah, that’s not going to end well for the Republican party in 2024.