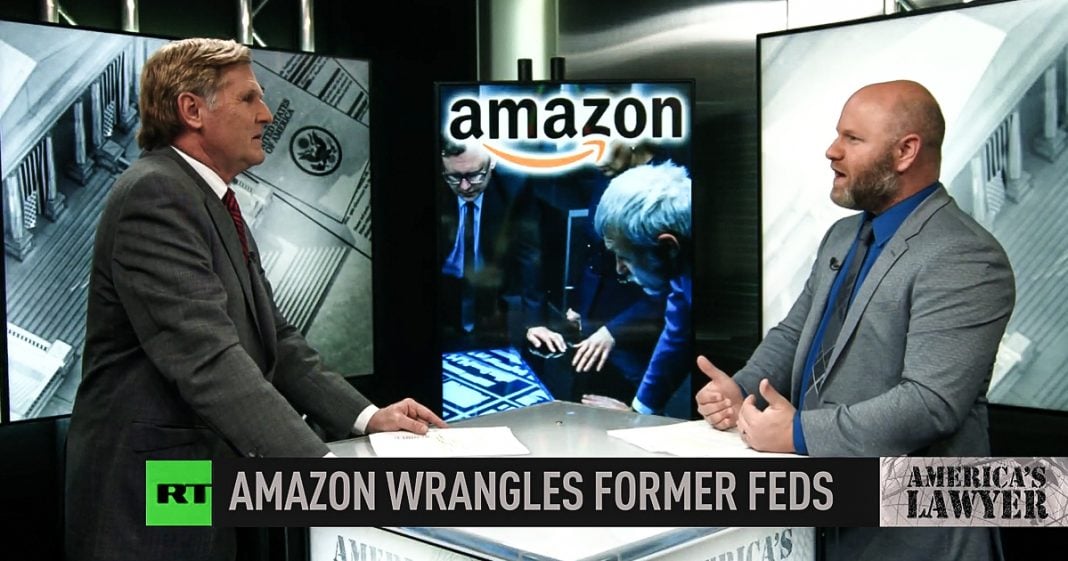 Mike Papantonio:             Amazon is hiring more and more former FBI agents as the company gets into cyber security business. Wow. This is really a problematic story. First of all, it, it starts out, Amazon has really seeded themselves in the military. You know, their, their, their military contracts are unbelievable. With police forces all over the country, those contracts are unbelievable and now they’re building their own army. You understand, and the army is all about controlling employees, controlling political activists who are going after them, controlling legitimate political people who are in office, legislators who are going after them. This army of FBI agents, by the way, this is a FBI revolving door moving through this company now.

Farron Cousins:                  Yeah, they’ve just hired another 20 former FBI agents at Amazon. They already had 26. So now you got close to 50 FBI agents working with Amazon for intelligence. And Amazon says, well, no, no, listen, this is just because we’re moving more into the intelligence apparatus, but, but you’re right. What this really is and I’m sure it has a lot to do, yes, with their new intelligence businesses, but no, they also want to keep tabs on all of the people that they believe might be a threat to their company coming from within or from within the government. We have seen them do it with the people trying to form unions. You know, we know for a fact that has happened. We have seen it happen with other folks who’ve been demanding higher wages at Amazon. This is just the next step. They have the money. They have the connections in the federal government to get to these people. And we’re going to see more of this. They’re absolutely entrenched right now in the FBI.

Mike Papantonio:             Let’s, and then you have J Edgar Hoover was a complete freak. I mean, this is a guy that used to dress up like Shirley Temple in the privacy of his home, and then try to run the FBI, very vindictive fella. He did the same thing, made the FBI an extension of corporate America.

Farron Cousins:                  Right. And now I, now it literally is this extension of corporate America with this revolving door that Amazon is setting up. You know, Amazon has tens of billions of dollars tied up with the defense department, with the department of justice. That is where the bulk of this company’s money comes from. It’s not from selling you your toothpaste on amazon.com. It comes from these massive government contracts and that is where they’re moving more towards. And we see things, you know, they’re, they’re involved in the NFL with their, you know, logistics and all that.

Farron Cousins:                  But, but this is their bread and butter and this is the one they don’t like to talk about. The Intercept still was able to get their hands on it anyway, because they know how to do these things. So Amazon got busted flat out with this. There, there’s no question about that. And unfortunately though, this is the kind of story that, yeah, the Intercept covers it. We’re talking about it here. I, it’s not going to go a whole lot further and that’s what gets so disappointing about a lot of the things we talk about is, they’re big, they’re important. Where’s the rest of the country getting missed?

Mike Papantonio:             Corporate, corporate investigative journalism is dead. I’ve said it, I said it last week and I got all this criticism. Oh, it’s not dead. They’re just having a rough time. No, they’re dead.