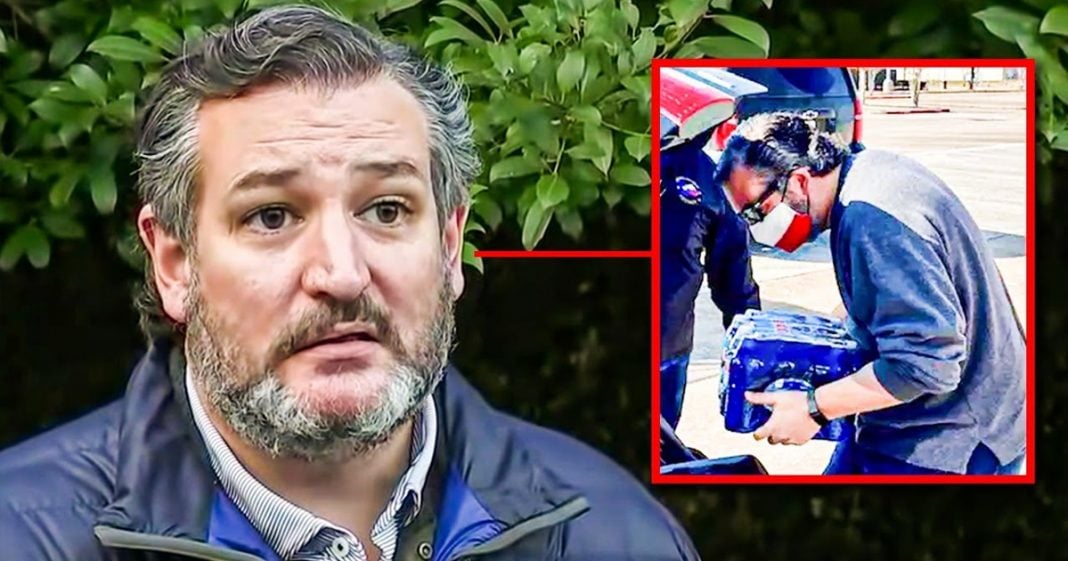 Ted Cruz’s problems aren’t going away any time soon, and now that he’s back from Mexico he’s still getting dragged on social media by people who see through his charade. The Senator posted a pathetic picture of himself putting bottles of water in the back of a car and tagging the picture #TexasStrong​. Meanwhile, Democrats have raised millions to help struggling citizens in Texas. Ring of Fire’s Farron Cousins explains what’s happening.

Republican Senator Ted Cruz got dragged over this past weekend on social media after he posted a picture of himself on Saturday evening, loading bottles of water into a car in Texas and he even put the hashtag on there, #TexasStrong. This of course, after the drama that unfolded throughout the entire week of Ted Cruz fleeing to Cancún, then coming right back, because that was always his plan. Then it turns out that his own friends turned on him, released the text messages between themselves and his wife showing that they were leaving because of the weather. He was not scheduled to come home right away. We know that now that he purchased the return ticket immediately after all the backlash. And so then he’s trying to rehab his image by releasing this photo of himself, putting waters in the back of somebody’s car. So, I mean, yeah. Good for you. That’s exactly the kind of thing that I said earlier in the week that you could have been there doing so I’m glad you did it.

The problem is you get no credit now. You’ve been shamed into doing these things, Ted. So it doesn’t matter what you do at this point. It doesn’t matter if you’re personally going up there in a bucket truck reconnecting people’s power lines, uh, no, you get no credit for anything at this point, Ted, because of what you did with the Cancún trip. Now here’s the thing, as I said, he’s getting dragged on social media and rightfully so, but what’s happening with the Republican, I don’t want to call it primary yet, because we’re not at a primary, but it really is the Republican primary, I guess, is far more damaging to Ted. His opponents, the people that will eventually run against him in the 2024 Republican primary they’re screenshotting all this, right? They are absolutely having a field day with it because they understand they can use this against him. They can absolutely run ads against Ted Cruz, calling him out for the Cancún trip, showing pictures of freezing Texans with Ted Cruz chilling down there on a beach in Cancún.

I don’t think Ted yet understands the damage that just the last six days have done to his career. His, his presidential aspirations may have died last week because of his little trip to Cancún that his wife organized. She may have ruined his future and I hope she did. Ted Cruz is a slimy, sneaky, sniffling little individual that also is actually unfortunately good at politics. He knows how to do it. He knows how to actually come across as sincere. He knows to sell a lie better than most Republicans that we see today. Ted Cruz is a frightening opponent for Democrats. He truly is, but now Ted Cruz may not even make it that far because he’s given his Republican opponents so much fodder to go after him all because he didn’t want to have to do any work and wanted to take a couple of snow days.