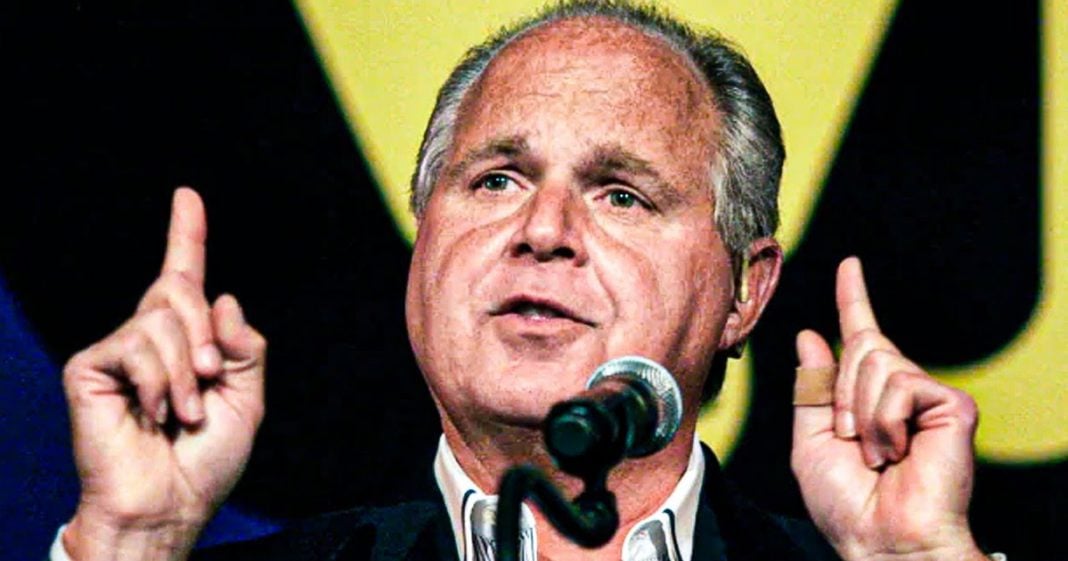 Republican lawmakers are wanting to lower American Flags to half staff this week to honor the passing of Rush Limbaugh, but the most people aren’t too keen on this move. Most of us understand that Limbaugh was a hate-filled, misogynistic, racist jackass, and he doesn’t even deserve to be acknowledged after his death. Ring of Fire’s Farron Cousins discusses this.

Republicans across the country, Republican lawmakers across the country, are actually suggesting that the United States should lower American flags to half staff to honor the life of Rush Limbaugh. Florida’s Trump loving Republican governor Ron DeSantis, the state actually where Rush Limbaugh broadcast his program from suggested that statewide he was going to do this. Republican crazed representative Lauren Boebert, uh, suggested we should do this nationally. And of course these two idiots were met with massive backlash by people who have a little bit of common sense and actually understood what Rush Limbaugh did here to the United States. Rush Limbaugh pedaled in hate and division. That’s what he did. This is not a great man. This was not some kind of revolutionary figure. It was a guy who understood that hate sells and that Republicans were stupid enough to believe anything. That’s why Rush Limbaugh was so successful because he duped a bunch of stupid people into hating a bunch of people that they shouldn’t have hated instead of hating the people that they should be hating.

There it is folks, the secret to Rush Limbaugh’s success. Don’t hate your oppressors. Don’t hate the capitalistic system that keeps holding you down. Instead, here’s a feminazi, hate her. Here’s a black kid, hate him. Here’s an immigrant, hate them, but don’t hate the actual people that are screwing up your life. You know, CEO’s that are keeping your wages low. Politicians who aren’t actually fighting for you and they’re deregulating and making your life a living hell. Radio personalities who are conning you every second that they’re on the air. Those are the people that they should have been hating, but instead Limbaugh convinced them otherwise. And then he gave birth or spawned, I guess, would be a much more accurate description, all of these other little wannabe Rush’s that we see popping up every single year now. They peddle in hate and division and misinformation and stupid people eat it up.

That’s what’s going on and that is what these Republicans want to honor. I think we can do a little better, right? I think we should keep the lowering of flags to elected officials or Supreme Court justices. How about that? How about we not muddy the waters by saying this guy had a popular radio show, lower the flag. Nah, maybe some standards as a country would be nice, right? Otherwise we’re just gonna have this constant back and forth ticky tack crap over who deserves to have the flags lowered for them and what not. This is ridiculous and these idiot Republicans aren’t doing this to honor Rush. They’re doing it to off the liberals and you know what, mission accomplished, because I don’t think they’re going to shut up about this, nor should they. We should all be pretty angry about the fact that Republicans are actually mourning the loss of a hate monger, because he was the one who gave them all their great talking points over the years. They owe their success to him and they truly miss him. Meanwhile, the rest of the country, good riddance to Rush Limbaugh is what they have to say.