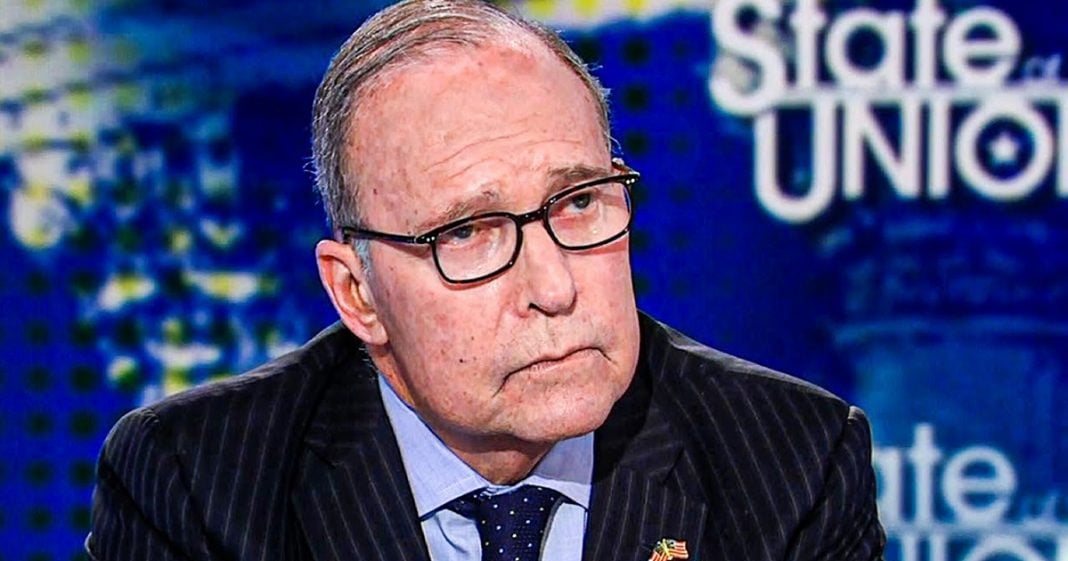 Former White House economic adviser Larry Kudlow said on his new home at Fox News this week that the power outages in Texas that left multiple people dead are somehow the consequences that people face for electing Joe Biden. Kudlow is a dishonest and desperate fraud who is trying to shift all of the blame off of his Republican buddies because he knows that his low information viewers will believe anything he says. Ring of Fire’s Farron Cousins discusses this.

Larry Kudlow, Donald Trump’s former White House economic advisor from his new home at Fox news this past weekend, somehow managed to blame the power outages in the state of Texas that left multiple people dead on Joe Biden. He didn’t explain how Joe Biden was responsible for it, or what specifically Joe Biden did with his progressive leftist policies that caused the Texas power outages, but Kudlow in his infinite wisdom is certain that it was Joe Biden. Here is what Kudlow had to say. I think they’ve moved very rapidly towards the progressive left position on a lot of these issues. He tried to temper it with talk about unity. There was some talk about moving to the center, that there would be more balanced. There wouldn’t be a far left progressive agenda. Unfortunately in the early weeks, what we’ve got a month here, it has been a left progressive agenda.

He’s going after the energy sector, you saw some of the consequences in Texas. That’s just the tip of the iceberg. Um, Larry, you’re an idiot. Anyone who listens to Larry Kudlow is an idiot too. Um, which that’s a given. Here’s the thing Lar, and I know you know this, nothing that Joe Biden has done has been put into effect yet. Nothing. Nothing. There isn’t a single thing Joe Biden has done that is actually a material thing here in the United States, yet. Nothing that he did, nothing that he said, no regulation that he put in place or re put in place by signing executive orders, undoing Trump executive orders, none of that played a role in a single thing that happened in Texas you frigging liar. And yeah, things like this drive me up the wall because Larry Kudlow’s job now just like everybody else at Fox news is to sit here and lie, lie, lie, lie, lie.

Lie about very obvious things. Why? Because they know their audience is stupid. And I think that’s the thing that actually me off the most is these morons who tune into Fox news every day and that’s what you are, you’re a moron and that’s not me talking. That’s them. That’s the hosts, who can take something so blatantly false and sell it to you anyway, and you eat it up. So yes, you’re a moron for that for falling into their trap day after day, night after night, year after year, that is what Fox news prays on. That is what Newsmax and One America feed on as well. Intelligent people don’t watch these networks. Gullible, idiotic people do. People looking for something to blame for why their life sucks.