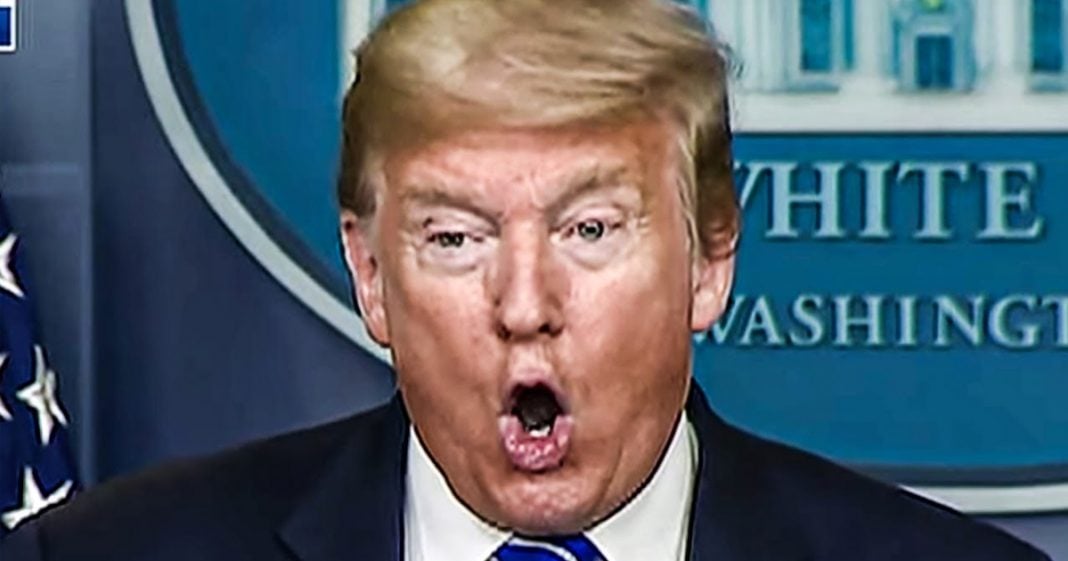 Intelligence experts are worried that Donald Trump’s financial struggles could leave him vulnerable to manipulation by outside powers, and therefore it makes him a major national security risk. The question really though is whether or not the countries that would want to bribe him have the resources to do it – some certainly do, while others clearly don’t. Ring of Fire’s Farron Cousins explains what’s happening.

According to intelligence experts here in the United States, experts and analysts, they’re afraid that Donald Trump is about to become a massive national security threat to the United States. And they think that this is going to happen because the guy is about to owe Deutsche Bank, $1 billion, a billion dollars that they know he doesn’t have. So on paper, I know the guy would never admit it in person, but on paper, Donald Trump has a very serious financial problem. He owes a lot of money that he does not have. Hey, welcome to the same boat as a hell of a lot of Americans. But either way, Donald Trump also knows things. He knows state secrets. He knows classified information. He knows everything about our intelligence. He knows what we’re doing in other countries covertly. And so these analysts believe that Donald Trump could easily be manipulated or coerced by foreign powers, just with the promise of money.

And to be honest, their fears are not just, you know, oh, what if this, they already know that he’s done it before, not even with the promise of money. Here’s how it is. He once disclosed information about a secret mission by Israel’s Mossad security services in Syria to a Russian ambassador. He accidentally revealed how advanced US spy satellites capabilities were in a Tweet. And in his first impeachment was for using fake intelligence about Ukrainian interference in his election to pressure the prime minister of that country. So, yeah, guy’s got quite a spotty history. So here’s the big question. Obviously, the United States has enemies, just like any other country has enemies, but do any of our enemies have the, the means to truly bribe Donald Trump? And I know everybody’s immediately thinking, but Russia could do it. Does Russia really have anything Trump wants? Really? It’s not exactly like they’re rolling in the dough over there and they, no offense to any Russians watching this, you don’t have any, as he likes to call it, prime real estate opportunities.

So it’s not like you could say, hey come, build building with Trump name. We give cash, you give secret. Yeah. It’s not going to happen. North Korea, they don’t have any money to offer him, but he has praised their real estate along their shorelines. So maybe that, except of course for the fact that most people can’t travel over there. So probably not going to be North Korea, either. No, to find the people who have anything Donald Trump wants, you’d have to go to the Middle East, his good friends in Saudi Arabia, United Arab Emirates. They’ve got beautiful resort areas. They have tons of money. So there’s cash opportunities, there’s real estate opportunities and a lot of these governments over there would love nothing more than to get their hands on the secrets of the United States. That I think is where the real threat comes in.

The only good side is that obviously Donald Trump, they’re trying to cut him off from the intelligence briefings. So he’s not gonna know what’s up to date anymore. So that’s good. Um, so hopefully, you know, the guy doesn’t go out there and divulge state secrets just because he’s a little short on cash, but please understand this is a real possibility and that they’re actually kind of preparing for this thing to happen. The other side of the story here, Donald Trump, for the rest of his life is going to be surrounded by secret service agents. So if any of you happen to be watching this, if you see something, say something. Don’t let this man giveaway state secrets while you’re standing right there because, uh, that’s kind of going to be on you at that point.