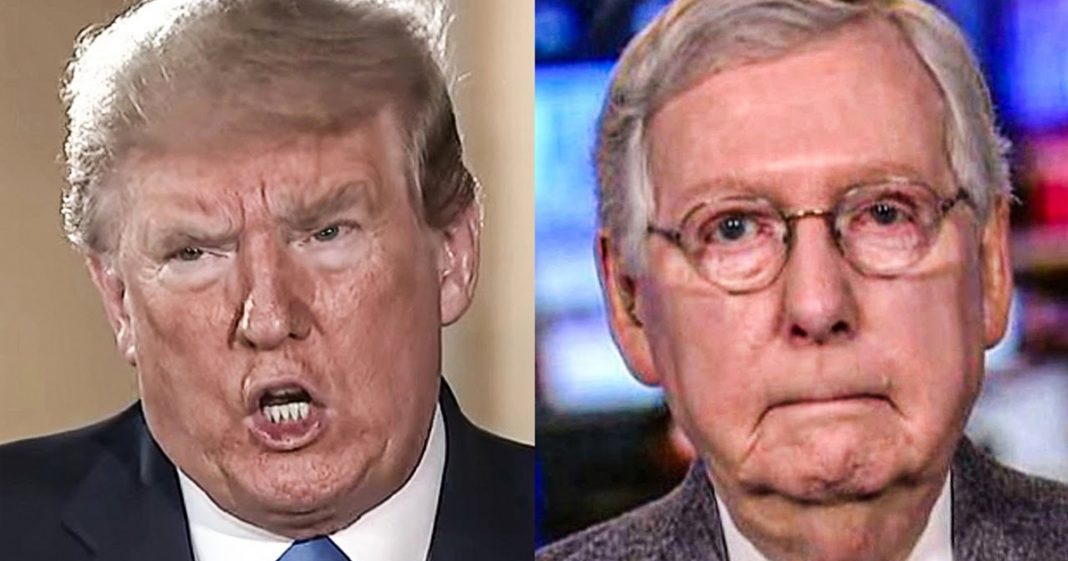 According to a new report by The Hill, Donald Trump is so angry about Mitch McConnell’s rebuke of him following the acquittal vote that he has vowed to make McConnell’s life a living hell. Meanwhile, McConnell says that he is never going to speak to Trump again and wants absolutely nothing to do with him. The high school drama is boiling over in the Senate, as Ring of Fire’s Farron Cousins explains.

The thing I’m wondering. Oh, and by the way, so Trump is out, I’m already trying to move on and I haven’t even finished the good part. Trump is over here saying, I’m going to make your life hell, I’m going to destroy you. And then over here, Mitch McConnell has told the press that he’s Donald Trump. Never gonna talk to him again. Doesn’t want to ever think about him again. He’s done. He doesn’t even exist in my world. So Mitch McConnell’s over here. Like, whatever, I can’t hear you. I can’t hear you. I can’t hear you. And Trump’s like, oh, you better meet me outside. I’m going to beat you. Yeah. Okay. So again, high school drama. We may even be looking at a middle school drama here. So anyway, the question is, how exactly can Trump make McConnell’s life a living hell? How’s that work?

Because McConnell’s already the minority leader, right? He just got reelected. So by the time his next election rolls around, he’s going to be approaching his mid eighties. I seriously doubt Mitch McConnell is going to even be able to run again. So what, what is he going to do, right? Huh, Donald, what are you going to do? That’s what I would like to know. I would like to know what your grand plan is to make Mitch McConnell’s life a living hell, because you have no authority. You have no power. You have the power that some members perceive that you have, but it’s not real. It only exists in their perceptions. Does that make sense? Like he only has power because they think he has power. If they thought he didn’t have power, he would have no authority to do anything about it. You know, challenging a Senator is a lot harder than say House member, you know, smaller districts, more frequent elections, more people to choose from really that could, you know, be in the House of Representatives.

So I don’t know that you’re going to have any success going after McConnell or going after McConnell’s allies in the Senate. So how are you going to make his life a living hell? You just gonna, just going to taunt him, just gonna torment him? You gonna, you gonna call him and then hang up as soon as he answers and then giggle like, heh heh heh, I got him? Like, for real, what are you going to do? Is Mitch McConnell going to come out of his door one morning, there’s gonna be a flaming bag of dog poop, because really I wouldn’t put it past Donald Trump to do that. Actually he wouldn’t do it. He’d have, you know, one of his assistants do it and it would be the greatest flaming bag of poop that anybody’s ever seen. Nobody’s ever thought of doing this before. Either way, these two idiots are going to continue fighting. It’s going to continue creating the rift within the Republican party and by God, it’s going to be super fun to watch it happen.