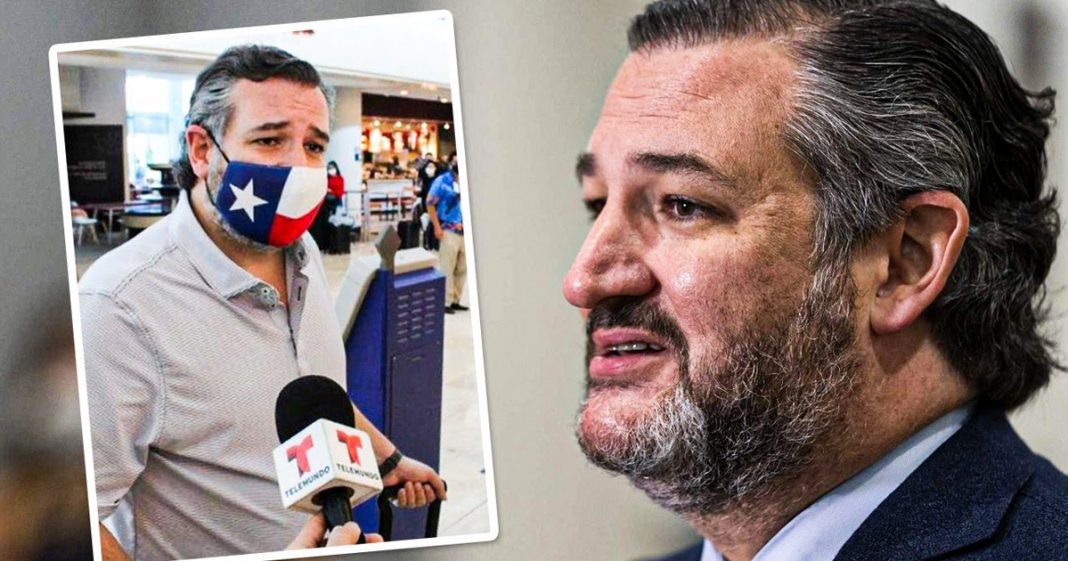 Ted Cruz attempted to escape blame for leaving the state of Texas during an emergency by saying that his daughters were the ones who wanted him to go with them, but that he had always planned on coming right back. Shortly after this, his family’s friends released text messages showing that Ted was lying about coming right back after they got settled in Cancun. Ring of Fire’s Farron Cousins explains what’s happening.

Things just keep getting worse for old Ted Cruz. First, the guy has to cut his vacation short. Then he flies back economy to the United States where he then says, yeah, listen, I understand Texas was in trouble, but we had this vacation planned and my, my daughters, they just wanted their daddy to go with them, you know, to accompany them down to Cancún with obviously, Heidi Cruz as well. And then I was always planning on getting on a plane and coming right back folks. So I was, I wasn’t going to vacation in Cancún, Ted Cruz says, I’m just doing this because my daughter’s begged me to. So he’s already in trouble for leaving during this horrendous weather and devastation in the state of Texas, during a pandemic, then he comes home and throws his own daughters under the bus for it.

Like, I didn’t want to do it. These, these crazy little girls here. Ah, what, what are you gonna do? Right? Well, turns out everything Ted Cruz said was an absolute lie. This vacation was not planned in advance. It was not his daughters who begged him to go down there. And it was definitely not his plan to turn around and immediately come right back and we know that because Ted Cruz’s friends, or Heidi Cruz’s friends, leaked the text message conversations to the New York Times yesterday, proving that every single thing Ted has said is a lie. Ted Cruz was originally planning on coming back this weekend with the entire family. Vacation was not planned in advance, in fact, it was planned because Heidi Cruz said she was freezing in her house and wanted to get out. And of course, we also now know that Ted Cruz did not have a ticket to immediately come back.

He booked that ticket yesterday. Everything the man said was a lie, which begs the question. Right? Okay. These were family friends that Heidi Cruz had invited to go down to Cancún with them. Oh, and by the way, also, they left the dog. They left their little dog in the house. So I don’t know if somebody was planning on coming and checking on the dog or if they just put, you know, a big giant pile of dog food on the floor and said, go to town over the next couple of days, but that’s also pretty disgusting from the Cruz family. So anyway, why did the friends leak the text messages showing that everything Ted said was a lie? Right? These are the family’s friends. Like these are your friends. You like them enough to invite them on a out of country trip with you.

The only thing I can think and of course I, I’m sure we’ll probably never know the real answer, but the only thing I can think is that they saw Ted Cruz come back, blame his little girls for this and they said, oh hell no, Ted, you’re not doing this. You’re not trying to do the typical politician thing and blame everybody else under the sun. We know the truth. We like Heidi, we tolerate you. So we’re going to go ahead and show the country what really happened. Whatever the reason it is that these individuals came forward and surrendered these text messages to the New York Times, we owe them a big thank you because everything that’s happening right now is absolutely destroying any hope that Ted Cruz has of being president after the 2024 election.