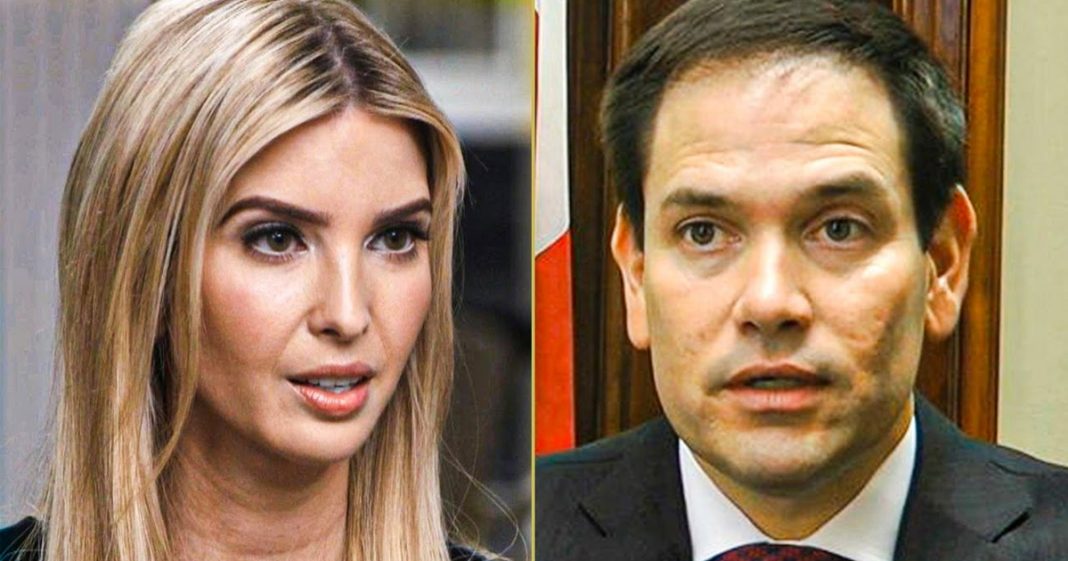 Ivanka Trump has apparently made the decision to NOT run for the senate seat currently being held by Marco Rubio in Florida in 2022, a move that is actually disappointing to Republicans. Rubio is an exceptionally weak Republican, and he would likely lose a primary to any Republican who challenged him. Ring of Fire’s Farron Cousins explains what this means and what could happen next.

According to a new report, Ivanka Trump has made the decision to not thoroughly embarrass Marco Rubio by running away against him in a primary in 2022. And I’m sure nobody is happier about this than Marco Rubio himself. The report says that actually just a couple of weeks ago, Rubio sat down with Ivanka. The two of them were together and they had a little chat and I’m assuming it was because he was worried she was going to primary him and instead she said that she is giving her full support and endorsement to his reelection campaign. So Marco Rubio from the threat of Ivanka Trump running has nothing to worry about there. I’m actually a little disappointed. I’m not going to lie. Look, I don’t want Ivanka Trump to be my Senator from here in the state of Florida. I think she’s a terrible human being.

Uh, but so is Marco Rubio, right? So you’re looking at replacing one horrible human being with just another horrible human being. So, you know, kind of offsets there. It’s no real, real loss either way, because I don’t think it for a second that a Democrat is going to come and take that seat away from Rubio at all. But here’s the thing, Rubio as I have repeatedly said, in my opinion, is the dumbest member of the US Senate. He is absolutely horrible on the campaign trail. He cannot perform in a debate. Chris Christie proved that in 2015. The guy’s just terrible. He is so incredibly stupidly weak that any Republican with even just half a brain has the ability to destroy him in a primary, not just beat him, destroy him. And then Marco Rubio is gone forever. Guy’s not smart enough to get a job as a pundit or at a think tank.

So what are the Republicans waiting for, right? Rubio’s incompetent. Nobody outside the state even likes him. I don’t even know if people in this state like him, they just like him because he calls himself Republican. So what are you waiting for, right? Get rid of this little nitwit. Now obviously the problem with that is that when they finally do find somebody to primary Marco Rubio, it’s not going to be a more, it’s not going to be like a Mitt Romney type. It’s not going to be a more moderate Republican. No, it’s going to be like a Matt Gaetz type and that is actually what concerns me the most because I’ve said that Matt Gaetz, I seriously doubt he could win outside of Florida. In fact, I’m pretty sure I said, I, I don’t think he could win outside his district. I do think he could win a primary against Marco Rubio.

And then again, just by virtue of being a Republican could likely win that Senate seat. I do think that that is a very real possibility. Now he is also not generally liked a ton outside of his district. So it may be a little bit harder for him to sell that. But again, just by virtue of being a Republican, somebody like Gaetz or even somebody equally as extreme would likely have a good chance of winning that seat from Marco Rubio. If the Democratic party came down to Florida and actually got serious, they could have an easy opportunity to take that seat back from Rubio because he’s that weak and he’s that pathetic. But the Democratic party really hasn’t taken Florida seriously ever since Bush V Gore. Like I don’t know what that did to Democrats here in Florida, but it kind of killed their spirits, but it’s been 20 years now. I think it’s time for them to move on, to get serious because unless you want Florida to become just another deep red state down here in the South, you’d better get to work.