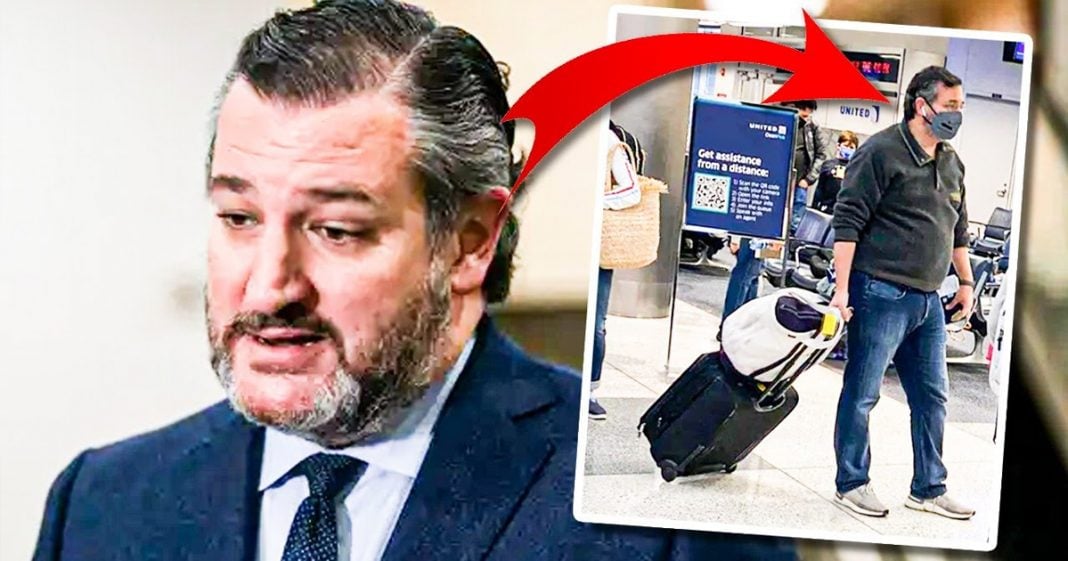 Viral photos online appear to show Republican Senator Ted Cruz on his way to Cancun for a vacation as his home state of Texas continues to freeze to death. This story represents everything that is wrong with our elected officials from both parties, as they constantly put their own wants and desires over the needs of their constituents. Ring of Fire’s Farron Cousins explains what’s happening.

As people in the state of Texas continue to literally freeze to death, Republican Senator from Texas Ted Cruz, thought this would be a perfect time to get the hell away from the United States and head on down to Cancún for a wonderful vacation or at least that is what photos would have us believe. Wednesday evening, a bunch of viral photos began circulating on social media that reportedly showed Ted Cruz and his family boarding a flight to Cancún, Mexico for vacation. Again, as Texas is going through this Arctic weather that they were not prepared for, millions without electricity, over a dozen people at this point have frozen to death in their homes. Hospitals also now running out of clean water. So big crisis all through the state of Texas and it appears that Ted Cruz is heading down to Mexico for vacation. Also heading to Mexico for a vacation during a pandemic. So kind of a double whammy there, ignoring the plight of your state and of course, traveling to a different country in the middle of a pandemic.

I’m sure Cruz was able to secure vaccines, not just for himself, obviously, but probably for his family as well though. Here’s the thing, Cruz’s office has not confirmed or denied that he did in fact, travel to Cancún. He has no official travel record on there of him traveling to Cancún. So this story has not, as of right this, well, as of me sitting here talking about it has not officially been confirmed one way or the other. What we do know is that this is Ted Cruz in the photographs getting on a plane. His kids are there. So his family is there with him at a time when Texas actually needs him. It’s a disaster. You have to, at least at this point, pretend that you care, Ted, that’s part of your job. Sometimes you have to cancel those vacations. But to be honest, what Ted Cruz is alleged to have done here is not atypical. This is something we see from lawmakers constantly. Chuck Schumer, during the Trump years made deals with Mitch McConnell to fast track a bunch of judges because Schumer and the Democrats wanted to go and take their vacations.

We just saw this past weekend, we had Democrats who thought Republicans would block their ability to call witnesses for the impeachment trial and then when they didn’t, Democrats were like, well, we’re not going to do it anyway, because we kind of want to go on vacation next week. So again, prioritizing their own selfish wants over the needs of the public. Chris Christie, the photographs of him on that New Jersey beach that was closed to the public because of a statewide government shutdown, but he was still out there chilling with his buddies on a beach that nobody else was allowed to go to. This is what lawmakers do and it is Democrats and Republicans. They want to go out and they want to have fun. They want to put their own selfish wants and desires over the needs of the public. Ted Cruz, I never thought I’d say these words, Texas needs you right now.

They need you to be there. They need you to help coordinate things with the federal government. The Biden administration has said, they’re going to start sending generators out to people. You know, they’re going to get FEMA involved. They’re going to have to start sending fresh water and those are the kinds of things that Ted Cruz 100% could be involved in. He could be involved in the discussions. He could be involved in the coordination of it, but he’s not. Maybe he’s going to Cancún, maybe he’s not, that part is actually irrelevant at this point because what we do know is that Ted Cruz, no matter where he is on this planet right now, isn’t doing a thing to help his constituents.