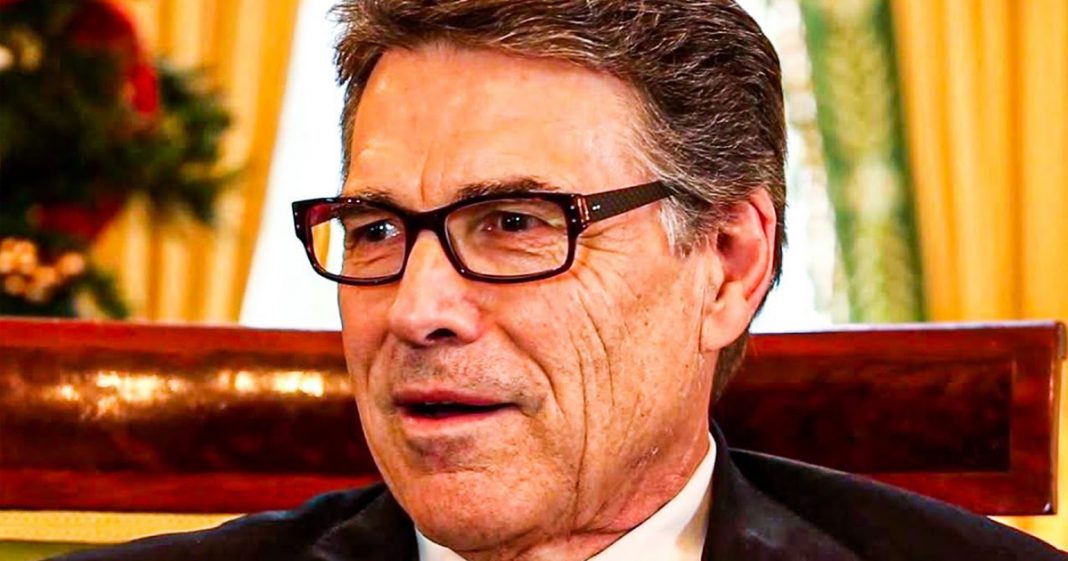 Former Texas governor Rick Perry said in an interview this week that Texas were willing to put up with the blackouts and extreme government incompetence if it meant they could live their lives without government regulation. A dozen people have died from the extreme cold, and Rick Perry thinks that these people were glad to be dying instead of facing government regulations on their energy sector. Ring of Fire’s Farron Cousins discusses this idiotic way of thinking.

Former Texas governor, former Trump administration official, Rick Perry came out this week. He’s actually been doing a lot of interviews because of what is happening over in the state of Texas. And he said, as Rick Perry is want to do, one of the dumbest things we have heard about what is happening in the state of Texas. Yes, folks, even dumber than frozen windmills caused everybody in Texas to lose power. Rick Perry said, and I quote, Texans would be without electricity for longer than three days to keep the federal government out of their business. Try not to let whatever the crisis of the day is take your eye off of having a resilient grid that keeps America safe personally, economically and strategically. In case you didn’t catch the first part, Texans would rather have no electricity during a snow storm that they’re not used to, that doesn’t happen in their area. They’d rather have no electricity for days on end, than have regulations. Because death is favorable to having the government say, hey, make sure you’re taking care of that for the people.

Imagine hating regulations that much, that you legitimately think people would rather die because that’s what’s happening in Texas. People are dying, they’re dying and Rick Perry says, I bet those people are glad to be dead instead of regulated. Right? Go straight to hell, Rick Perry, go straight to hell. That’s about the nicest thing I can say about such an idiotic statement, but that’s the Republican mentality. Regulations are the worst possible thing you could do to anyone or anything and that makes no sense. Republicans hate you. Republicans want you to die. I used to think that they were simply okay with people dying. I’m firmly convinced now, Republicans actually want you dead. They don’t want you alive. Absolutely not. And statements like this prove that. I mean, he literally said it, like, the, they’d rather die than have Democrats come in and put regulations in. As we have discussed, Texas has its own little energy grid, the ERCOT system, they did not want to join in the national energy grid that other States did and other States who got hit with this storm aren’t having any of the problems that Texas is because the Republicans who have controlled Texas for over a decade and, by the way, were cited a decade ago for not having their grid up to code. But the Republicans who have been running that state said, oh, screw it. What’s the worst that could happen. Right?

Oops. To quote Rick Perry again, oops, because the worst that could happen has happened. And not only that, you’re blaming renewable energy, you’re showing your incompetence and you’re going out there and saying that people would rather be dead than regulated. Well guess what folks, in a deregulated America, that’s pretty much your only option, die. And hope that you die quick and not of some kind of horrible cancer you get because we couldn’t regulate all the chemicals coming out of the factories. These people are disgusting. They’re being exposed right now and so they’re a little desperate and they’re lashing out. But at the bottom of this, they’re disgusting. And another point I want to make, I’ve seen the little meme going around saying, you know, don’t, you know, criticize or, or whatever, mock the people of Texas, you know, they’re just the victim of the policies put in place by these Republican politicians. But folks who do you think put the Republican politicians up in there for decades?

Now, I’m not saying we need to shame or laugh at the people who are suffering by any stretch. No, they need help. They absolutely need help and you should give what you can give. But at the same time, they also need to be educated because yes, they do share some of the blame. When you continuously put the same people in power, the same people who literally say you’re better off dead than regulated, eventually you got to own that a little bit. So I disagree with that meme that’s going around and I think in addition to helping them, making sure nobody else dies. They need to be explained to that this is what Republicans do and if you don’t want to face this situation again, maybe stop voting for them.