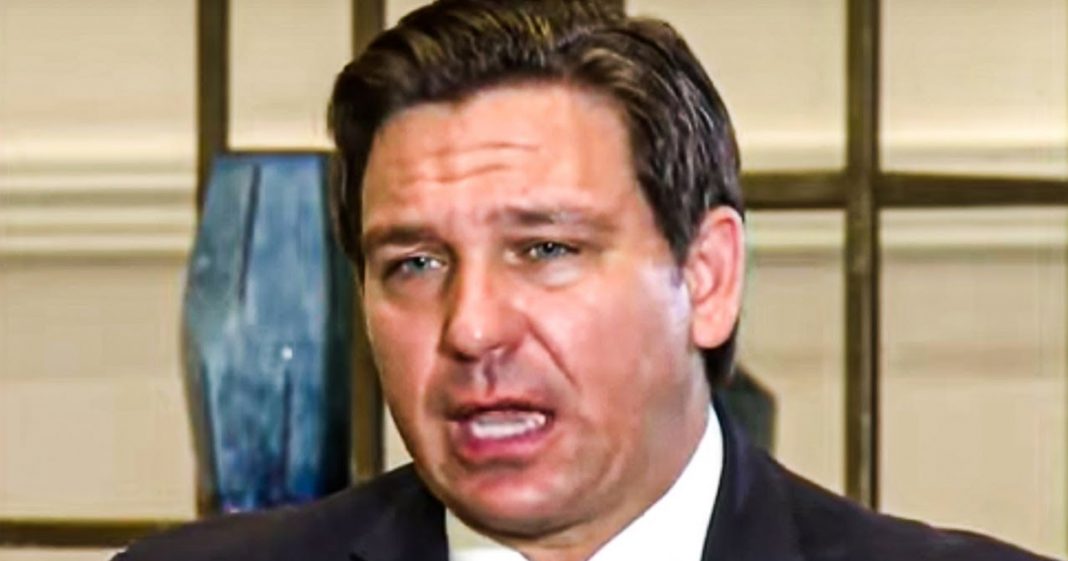 Florida’s Trump-loving Republican governor Ron DeSantis is using his power to send doses of the COVID vaccine to his donors in wealthy parts of Florida. Setting up mobile vaccine units, DeSantis is prioritizing his friends as millions of Florida residents beg for the vaccine. In addition, he is threatening to pull doses of the vaccine out of the area if local officials complain about how he is handling the situation. Ring of Fire’s Farron Cousins explains what’s happening.

Florida’s Trump loving Republican governor Ron DeSantis is once again making headlines for all the wrong reasons. This time it’s because of his dis, distribution of the COVID-19 vaccines here in the state of Florida, which our regular viewers you have heard me rant and rave about that for several weeks now because it’s been an absolute unmitigated disaster. Well, Ron DeSantis somehow made it worse. He has prioritized wealthy zip codes down in South Florida to get the vaccine before other areas now and one of the areas happens to be the place called the residents of Lakewood Ranch, which is a planned community put together by two wealthy Republican donors who happened to give $900,000 to Ron DeSantis’ gubernatorial campaign. So this community that this wealthy power couple down in South Florida created, and they run it, I guess, you know, they’re obviously getting profits off of it. Ron DeSantis comes in and says, you know what, I’m going to put a mobile vaccine clinic in this area, in this wealthy little neighborhood and it, it gets worse.

If local officials complain that I’m doing this for these individuals, I’m going to take the vaccines away from the rest of this County, for the rest of the zip code. You don’t get them if you complain that I’m putting them with their own mobile unit so they don’t have to go out there and, you know, mingle with the plebs. This man is an unmitigated disaster. He is absolutely like, right before our eyes, openly telling us these people gave me money. I’m going to give them the vaccine and there’s nothing you can do about it and if you try to do something about it, I’m going to punish you. Now in a normal state, this guy would have already been recalled. This guy would have been removed from office and shunned from polite society for the remainder of his days. But here in Florida, uh, our Republican controlled government actually passed a law not that, a couple of years ago really, saying you can’t recall him. There is literally nothing we can do. There is nothing that can be done about what this man is doing. We could call for an investigation. We could call for his resignation. Republicans have a stranglehold grip on the state of Florida.

This is not a swing state folks. This is a deep dark red state. Prior to the 2020 election, I thought too, that it was a swing state. I got proven very, very wrong and now I see it for what it is. The only way to stop DeSantis and his reign of terror is to vote him out in 2022, which I know for a fact, the idiot Republicans in this state won’t do, they won’t, they won’t do it. It won’t matter. Alabama has had a Democratic governor more recently than the state of Florida has, think about that. You know, deep red Alabama was more willing to elect a Democrat as their governor more recently than Florida was. Yeah. I always point that way because that’s the direction Tallahassee is from where I am, that’s the state Capitol. Um, we’re screwed and Ron DeSantis knows that he is untouchable and that there’s nothing we can do. There is nothing we can legally do. There is no mechanism for recall in the state of Florida, we just have to suffer through it. You know, we watch all these other governors right now, screwing up and getting called out and facing accountability. You know, Newsom, Cuomo. Those guys are going to be gone. But Ron DeSantis doing the same crap here in Florida, and I guarantee you, he gets another four years.